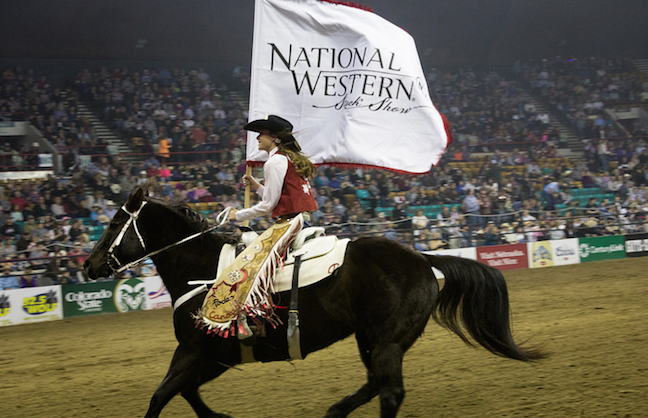 Attendance at the 110th National Western Stock Show in Denver was the second highest in history.

Stock show lovers from across the nation flocked to Denver for 110th National Western Stock Show where agriculture and rodeo professionals entertained a record-breaking number of attendees.

The stock show ran Jan. 4-24, with 686,745 visitors filling the venue that sits just outside of downtown Denver. That figure is up 4,207 guests from 2015, making it the second highest-attended show in the 110-year history of the event.

Record attendance wasn’t the only factor that made this year’s stock show shine.

The Junior Livestock Auction raised a total of $886,250 with nearly $400,000 of those funds going to scholarships.

The event’s top eight animals set an all-time record for the most sales in history, ringing in $412,000, with the Grand Champion Steer selling for $117,000, which stock show officials gloat as “the second highest bid in stock show history.”

“You think about the youth that raise those animals all year and then compete to win money that goes to their college education,” said National Western Stock Show President and CEO Paul Andrews, highlighting that a portion of the proceeds go to the National Western Scholarship Trust.

This year, nearly 330 vendors set up shop and more than 800 trade show booths were lined up for consumers, bringing big business to the annual gathering.

“Denver’s economy over the course of two years has been very strong,” Andrews said, highlighting the economy’s health as one of the reasons for record attendance and a boost in business. “We were nervous about the oil and gas economy, but our sponsors rose to the occasion.”

Despite the nation’s oil and gas slump, Anadarko — an oil and gas company with a large presence in Colorado — remained one of the stock show’s premiere sponsors, Andrews said.

“It’s companies like that that made the difference,” Andrews added.

Andrews said also that the stock show does not charge for parking, which helps increase interest in the event.

“People frankly appreciate that,” Andrews said. “Instead of asking them for a 10 or 20 dollar bill, we greet them with a sheet of paper. Those factors drive attendance numbers.”

“Our rodeos are excellent, top to bottom entertainment with specialty acts,” Andrews said.

The stock show also showcased a National Western Nursery where newborn animals were on display with their mothers. Animals included piglets, baby llamas and baby donkeys.

“We had some really interesting animals that had just given birth,” Andrews said.

The sheer history of the stock show helps attract people of all ages, said John Ellis, vice president of partnership and business.

The show also has educational programs and demonstrations for nonagricultural attendees to highlight how food is grown, Ellis said.

Giving back to the agricultural community is a big part of the stock show’s motto. As a 501(c)(3), the National Western Stock Show invests in the future of farming, education and medicine for animals.

The scholarships go mainly to students studying medicine and agriculture at Colorado State University, colleges in Wyoming and the University of Colorado medicine fields, Ellis said.

That’s why it’s such a big deal when livestock animals sell with high price tags.

The stock show ended on Sunday, Jan. 24, the same day as the Broncos playoff game against the Patriots that took place just down the road from the stock show. Surprisingly, the game didn’t cause a decrease in stock show attendance, Andrews said.

“We were absolutely shocked. We had a rodeo right in the middle of the Broncos game. We had a full building,” Andrews said.