NBA Finals- From the GMs 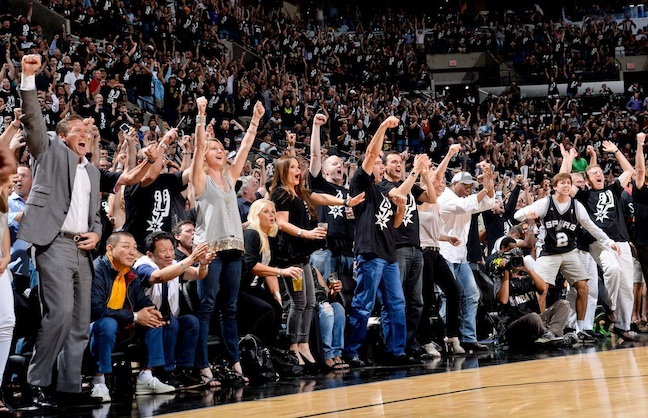 The crowd reacts during Game 3 of the 2013 NBA Finals. (Photo by NBAE/Getty Images)

Seven small Super Bowls. That’s how Kim Stone, GM for AmericanAirlines Arena in Miami, looks at the National Basketball Association Finals, which can last a total of seven games.

“The more times you do something the easier it becomes, and we pride ourselves on being a learning organization,” said Stone. “We keep a lot of detailed notes and review them prior to the next time we have a similar event so we can make improvements. We’re big on always wanting to learn and get better.”

“Doing this three years in a row, we’ve gotten much smarter at it,” she added.

Tom Paquette, GM of AT&T Center in San Antonio, home to Finals rivals the San Antonio Spurs, has also hosted NBA Finals games before — they just weren’t at this venue, and weren’t in this decade.

“It’s probably been about 12 years since I’ve worked an NBA Finals, but it was back in Philadelphia when the 76ers played the Los Angeles Lakers” at Wells Fargo Center, said Paquette, who added that though little details have changed, it’s always been a huge event.

Spurs games are generally very well attended, with Paquette saying that there have been several sellouts this season. Though the venue doesn’t see much of an attendance increase when it comes to the NBA Finals, ancillary income rises significantly.

Food and beverage per caps increase by as much as 30 percent during the championship games and merchandise sales also increase significantly.

“You might see a 30-40-percent increase in retail sales during the conference championship, but when you hit the finals that might go to 70-80 percent higher than during the normal season,” said Paquette. “There’s a whole line of Finals merchandise that people want, and they only have a limited time to buy and wear it.”

Stone said that AmericanAirlines Arena has seen increased F&B and merchandise per caps in each round of the championships, from the Eastern Conference to the Finals.

“We have 400 media seats that we have to build in our existing seating locations,” said Stone, who added that each media seat takes two existing seats because of desk space. “In order to make one seat location you have to kill two seats, because you need to kill the seat in front of the media seat to build a table top.”

The Spurs' Danny Green jumps to sink a three-pointer. (Photo by NBAE/Getty Images)

There are a couple of ways venues can make up for the loss of single game seats.

AmericanAirlines Arena has standing-room platforms at the top of the 400-level that can increase capacity due to demand. There are also platforms for disabled viewers, which have the ability to flip into two rows of seats, but only if ADA regulations have already been met.

“Even though the building capacity diminishes slightly, it’s not drastic. The energy and volume of cheering fans is like five times louder than during the regular season, so you truly don’t miss the seats because the fans make up for it,” said Stone. “We also don’t feel it in our ancillary revenue either.”

“Fortunately for us, people like to eat, drink and buy retail during the championship, so those numbers all go up,” she added. Attendance for this year’s NBA Finals at AmericanAirlines Arena has been above 19,000.

Paquette called accommodating the media influx during the Finals a “massive endeavor,” but said the exposure is great for the team, the building and the city.

During away games of the Finals, both venues host viewing parties. AT&T Center welcomed 7,000 fans during the first game of the finals and 12,000 during the second viewing party. The facility required a ticket to attend the event, but tickets were free through giveaways by sponsors or at the facility.

AmericanAirlines Arena calls its viewing parties ‘road rallies,’ which bring in about 8,000-10,000 attendees. During the Eastern Conference Finals, tickets for the road rallies cost $2 each, which increased to $5 during the Finals.

“We want the community to be able to come in and enjoy it,” said Stone. “This is an opportunity for the everyday fan and families that maybe couldn’t afford game tickets but still want to have the venue experience.”

The marketing department brings out entertainment during the road rallies, and doors open an hour before the game is broadcast. The events are a good deal for the venue, too, which opens regular concessions areas — but not premium areas like suites and loges — and makes about 50 percent of the F&B revenue of a normal game.

Security for the road rallies is the same procedure as during a normal finals game, where everybody gets wanded and everyone’s bag gets checked.

“Any time you have a large crowd, the responsibility is the safety and security of the people, first and foremost,” said Stone. “The money and the good time is secondary to a safe and secure event for everybody.”

The NBA Finals currently stand with the Spurs in the lead, two games to one. The next game is in San Antonio, June 13, and the first team to win four games will be named the NBA Finals Champions.