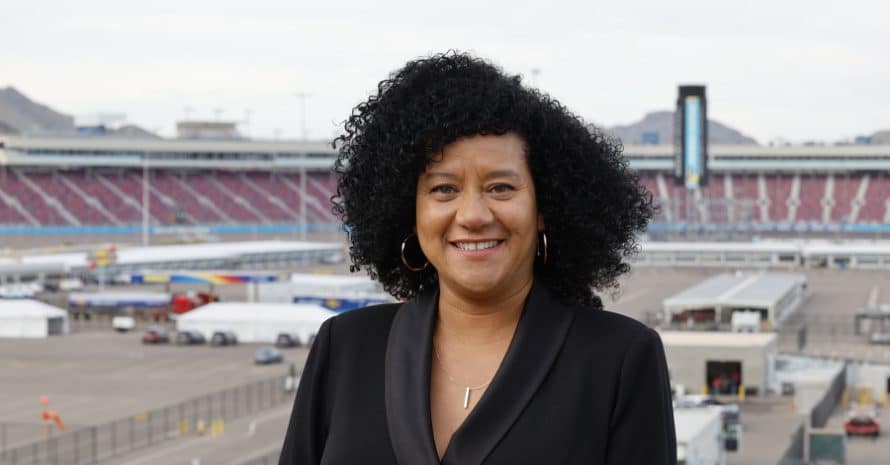 MULTIPLE FIRSTS: Latasha Causey is the first African-American female to be a track president. (Courtesy NASCAR)

Latasha Causey admitted she didn’t know much about NASCAR before she met Phoenix Raceway president Julie Giese four years ago at a local networking event.

On Monday, Nov. 28, Causey will step into that very role, as Giese moves on to become president of NASCAR’s Chicago Street Course.

Causey is not only Phoenix Raceway’s new track president, but NASCAR’s first African-American female filling that top position. Behind Giese, she is the second woman to hold the position at the Avondale, Arizona venue.

“I have been fortunate to call The Valley home my entire life, and I could not be more grateful to become the next leader of Phoenix Raceway,” said Causey. “NASCAR is a sport that brings people together, and as a result, Phoenix Raceway plays a key role in showcasing our great community to visitors across the country every year. I cannot wait to help build upon the great work that’s already been done in making this facility one of the true gems in sports and entertainment.”

“It’s special,” said Causey, a native of Phoenix’s Maryvale neighborhood. “There’s nothing like the experience of NASCAR. This last (weekend) was my fourth race. Every single time, it’s so exciting. It’s an adrenaline rush. I was there Friday to Sunday and every day it progressively got better.

“When you’re there, you can’t not be a NASCAR fan,” she said. “You can get up close and personal with the drivers, learn their stories and the hard work they put into it.”

“Latasha’s track record speaks for itself as a highly experienced executive that prioritizes relationships and giving back to the community — also core values of ours at NASCAR,” said Chip Wile, NASCAR senior vice president and chief track properties officer, in a statement.

Causey said in her new role, she hopes to continue Giese’s legacy.

“The really great thing about the track is that Julie is leaving it in such a great place,” said Causey, who lives in Phoenix with her husband, Sullivan, and two boys. “I’m not coming into a bad place. She has set it up for me to continue to be successful. I’m leveraging the team that’s there. I want to continue to open it up to the community.”

“We have two events per year — the race in March 2023 and the championship in November 2023,” she said. “We want to open (the track) up to the community for concerts and invite other individuals to the track. We want to host other events there; events for nonprofits, for WESTMARC (Western Maricopa Coalition). We want to continue to open it up to our West Valley partners and others as well.”

Causey’s most recent role was as vice president and community development officer for Bell Bank in Arizona. There, she worked with key business leaders and community organizations across the state to guide Bell’s efforts in helping minority-owned businesses, nonprofit organizations, underserved populations and urban neighborhoods.

Prior to Bell Bank, Causey held various leadership roles for more than a decade at USAA’s North Phoenix Campus where she was responsible for leading the local USAA Foundation and employee volunteerism in the Phoenix area. She was also a part of the human resources talent acquisition team across all USAA locations.

An Arizona State University graduate, Causey is a member of the ASU Alumni Board of Directors. She earned her master’s degree in organizational management and holds a professional human resources certification.

Active in the community, Causey is board chair for the Phoenix Workforce Commission and serves on the board of the Valley of the Sun United Way.