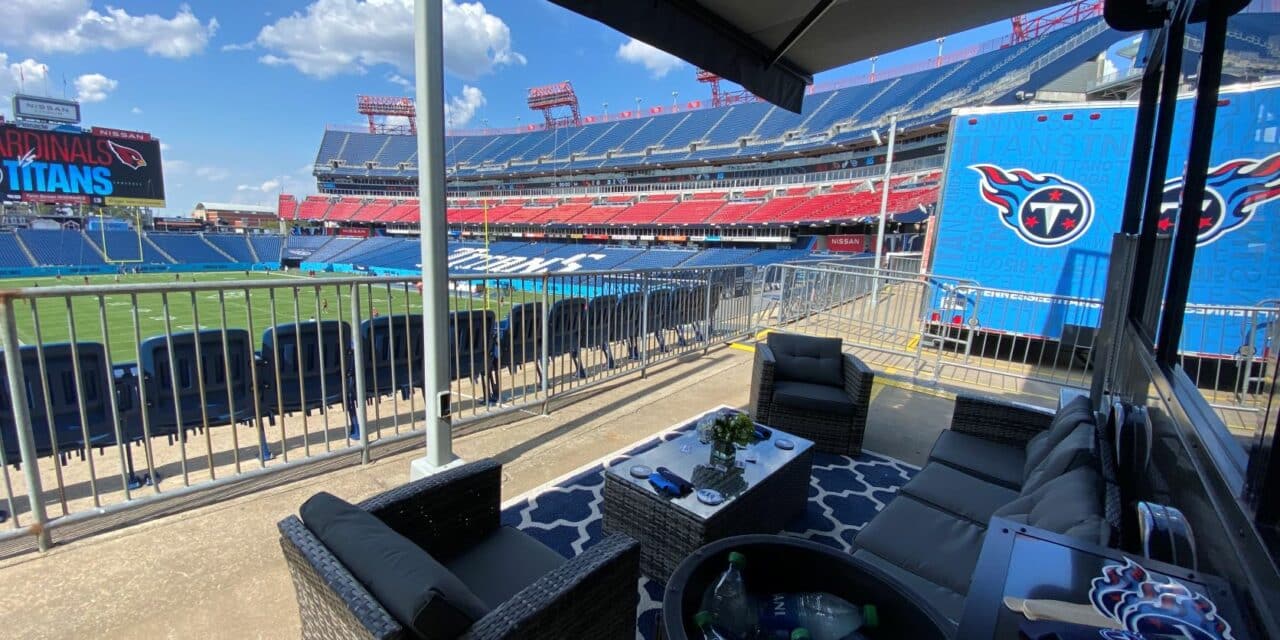 The Tennessee Titans have installed portable suites in both end zones at Nissan Stadium as the NFL team creates additional premium inventory to supplement traditional suites and club seats.

The new products, produced by Party Shack and branded as Terrace Suites, debuted Aug. 27 for the Titans’ final preseason game against Arizona.

The Titans invested $100,000 to buy the structures, said Andy Bradshaw, the team’s senior director of premium sales and hospitality. They fill a large plaza space about 25 rows from the field, previously occupied by sponsor zones and food vendors. Those folks were relocated elsewhere in the stadium, he said.

Before the installations, the NFL had to approve the retrofit as part of its revenue-sharing model for ticket inventory in the seating bowl. The portable suites met the half-dozen qualifications required for suites, Bradshaw said.

“We got together with the league and went through a pretty extensive process,” he said. “We had to send them photos and tell them how we were using them and they made the call.”

In the north end zone, the suite behind Section 103 was sold to DraftKings, a Titans sports betting partner, as part of a full-season sponsorship package.

The units come with three viewing areas: an interior space with eight fixed seats, cushioned and numbered; an outdoor patio setup with a couch, coffee table, high-top tables and chairs; and the rooftop of the structure, a popular spot to watch the game, Bradshaw said.

The new inventory meets the demand for a suite-like product after the Titans developed a comprehensive platform that provides annual suite holders year-round access to exclusive perks and benefits. It’s geared to both large and small businesses and high net worth individuals.

During the offseason, the Titans sold 25 full-season leases and many single-game rentals, but there was still demand for a suite-like product. Nissan Stadium, now 23 years old, is essentially limited to traditional suites and club seats.

“The trickle-down effect has led to more annual lease sales than ever before and less inventory available for single-game rentals, (which) forced us to get more creative and look at options like Party Shack,” Bradshaw said.

“There’s not a diverse mix here and the Terrace Suites give people another premium option,” he said. “We’re trying to find more variety, whether it’s four, six, eight or 12 seats. When we’re looking at a renovated or new stadium, that’s definitely going to change for us.”

For Party Shack, whose products have been used mostly for tailgating outside sports venues, including Arrowhead Stadium, FedEx Field and this year, FirstEnergy Stadium, it’s the first time its portable suites have been used inside an NFL facility, said Bobby Bowers, founder and CEO.

The Titans had an existing relationship with Party Shack, a 5-year-old Jacksonville company. The vendor previously built some customer service kiosks branded with the team’s colors and logo for Nissan Stadium.

Bradshaw said he expects to sell the single-game Terrace Suite for all eight regular-season games after seeing the response from one group that bought the suite for the preseason game. They’re interested in buying it for multiple games, he said.

The Titans will keep the Terrace Suites “parked” in the stadium year-round for other events, he said. The single-game suite faces the stage end and can be sold for individual concerts. Both are flexible enough to take on the road for training camp and other community outreach programs.

The Titans plan to build a case study tied to the Terrace Suites and the incremental revenue those premium products generate over the course of the season, according to Bowers.

“They can provide us with analytics and speak on behalf of Party Shack with other NFL teams,” he said.

Over the past year, Party Shack has grown its business to include portable suites set up at PGA and USTA tour events, a tailgate space next to Geodis Park, the new Major League Soccer stadium in Nashville, and Formula One racing at Hard Rock Stadium.