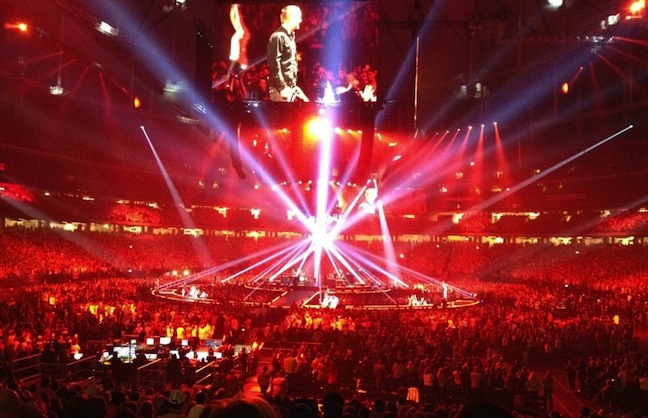 Passion brings 60,000 young adults to the Georgia Dome in Atlanta.

With a three- to seven-day setup timeline shortened to only 18 hours, it seemed like Atlanta’s Georgia Dome needed the hand of God to help with the preparations of Passion 2013.

In its most aggressive venue turnaround ever, the Dome hosted an Atlanta Falcons and Tampa Bay Buccaneers NFL game on Dec. 30 and the Chick-Fil-A Bowl matchup of Louisiana State University and Clemson University on New Year’s Eve, before transforming the stadium to accommodate the 60,000 young adults attending the annual four-day Christian conference and concert.

Other than the 200 rigging points, which were prepared in early December, the setup started from scratch a few minutes after midnight on New Year’s Eve and was completed by 6 p.m. the following day, when the conference kicked off.

This wasn’t the first time the venue faced a seemingly insurmountable task. The year of Hurricane Katrina, the dome hosted a Falcons game, the Chick-Fil-A Bowl and the Sugar Bowl in three consecutive days.

“Still, the Passion preparations were our toughest, due to back-to-back sold-out games and the transformation of the arena into a concert setup that was comparable to a U2 show from a production standpoint,” said Carl Adkins, Georgia Dome general manager.

More than 1,000 workers were involved with cleaning the facility, installing the floor over the turf, loading staging equipment, hooking up sound and lights, and setting up an additional 6,400 chairs, among other tasks on the extensive list. This included Passion Conference’s crew of about 215, which involved 170 local crew members and 45 technicians.

The schedule planned by the venue and Passion team was in 15-minute increments, with meetings held with key staff members from both sides every couple of hours to assess the progress.

Fortunately, the Georgia Dome staff had good insight into what the Passion setup entailed, as this was the sixth time the 15-year-old event has been held on campus and the second time it was hosted by the Dome.

“Last year’s stage setup was more traditional, since attendance was in the low 40,000s,” Adkins said. “This time around, with 20,000 more attendees, we were dealing with a [more complex] theater-in-the-round format.”

The elaborate planning process included a number of contingency plans, including a plan B in the event Passion 2013 had to be canceled or postponed. None of these had to be enacted.

“It was a marathon in the sense that, once the doors opened at 6 p.m., we knew we had accomplished the toughest challenge of the year, yet still had 16- to 18-hour days ahead of us to put on the event,” Adkins said. “In addition to planning, logistics and shoehorning our schedule, it was also about how to handle the additional 60,000 people who would be on campus for four days, getting them from the main sessions at the Dome to the community group breakout meetings at World Congress Center in a 60-minute period.”

One of the most notable accomplishments was serving boxed lunches to 60,000 during the 20-minute breaks.

When Passion Conferences was created in 1997, it drew 2,000 people to Austin (Texas) Convention Center. The event has grown into one of the largest annual gatherings of young Christians in the U.S. This year, the conference drew 18- to 25-year-olds from 54 different nations and more than 2,000 colleges and universities.

The Passion Organization, which includes Atlanta’s Passion City Church, the conference arm 268 Generation and recording label sixsteprecords, is based in Alpharetta, Ga., and headed by Louie Giglio.

With a staff of 25, the nonprofit organization sets its conference registration fees, which range from $129 to $219, to cover the cost of the event. Registration is online through the organization’s website. Marketing is grassroots and mainly by word of mouth by past attendees as well as via social media.

“Passion is an organic movement,” said Cheryl Bell, director of events. “We’ve been given a unique platform to unite people from all types of churches.”

The conference is worship-based, with main sessions lasting between one-and-a-half and two-and-a-half hours.

“The main sessions are what you’d expect from a full-blown concert, and include more than 300 moving lights, LED walls and 23 cameras,” said Jonathan Sheehan, Passion Conferences’ production manager.

Most of those speaking and performing at Passion 2013 have been part of the movement for many years.

During the conference, students also were broken up into 19 random community discussion groups at the adjacent Georgia World Congress Center, where they had an opportunity to interact with new people and discuss the session topics.

“Although our focus, scheduling and structure are fairly consistent, we’re very fluid in terms of our execution [with this event],” Bell said. “Because we’re dealing with college students who are always changing, we try to be fresh with our approach.”

The event also includes philanthropic opportunities. In addition to collecting more than $3.3 million to fund 23 causes with 19 partner organizations to shine a light on slavery around the world, 186,390 pairs of socks and 31,485 towels were collected for the homeless.

“After a call was put out for all attendees to bring socks to donate, I walked the campus to find at least six pickup points with bales and bales of socks,” Adkins said. “It’s great to see what the power of people coming together can do. These are a great group of kids.”

In an effort to take its movement global, the organization launched world tours in 2008, 2010 and 2012. Destinations included a number of European cities, and various dates in North America, Australia, Asia, Russia, South America and South Africa.

Although plans have not yet been finalized for Passion 2014, Adkins said the organization has expressed an interest in returning to the Georgia Dome. Alternate conference dates are being considered due to conflicts with next year’s scheduled college bowl games.

“The reason things happened at the level they did this year was because of the great partnership between Passion, the Georgia Dome and the Georgia World Congress Center,” Bell said. “We accomplished all that we envisioned, and this is a testament to the venues that it happened as smoothly as it did.”