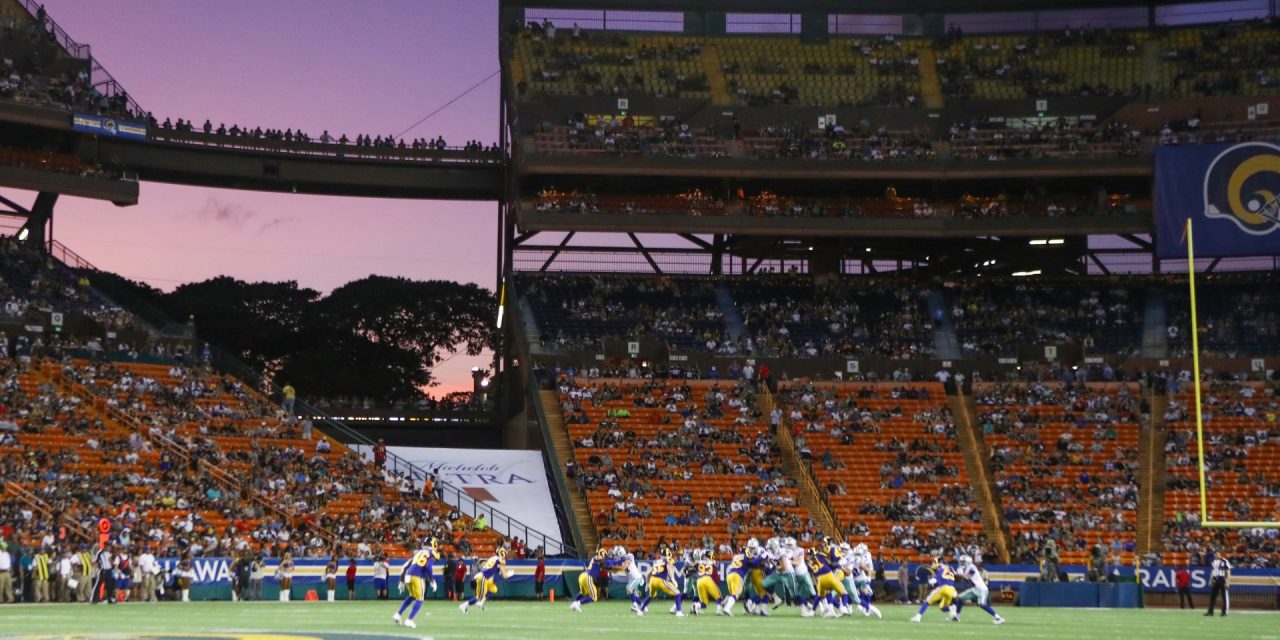 SUNSET FOR ALOHA? Aloha Stadium, which opened in 1975, played host to an NFL preseason game in August. (Getty Images)

Hawaii, just like every other state in the union, has been stunned by the coronavirus. In central Oahu, Aloha Stadium sits empty, some of its parking lots occupied by 1,500 rental cars left idle by a travel and tourism industry that screeched to a halt in mid-March.

In the midst of the COVID-19 pandemic, though, state officials are moving ahead to plan for the future of the islands’ biggest sports and entertainment facility. At this point, it’s become a focal point for economic stimulus after the virus subsides, according to a story last week in the Honolulu Star-Advertiser.

On March 27, the state issued a request for qualifications for the New Aloha Stadium Entertainment District. The 61-page document provides details of a multiphase project with a new 35,000-seat stadium surrounded by mixed-use elements. The plan calls for retail and office space, residential units and a hotel to be built on the 98-acre site.

The total project cost is $350 million, financed by the sale of general obligation and revenue bonds, as stated in the RFQ. The project is defined as a public-private partnership encompassing a developer, architect, general contractor and structural engineering firm.

Development teams have until April 24 to submit their qualifications.

The state will select up to three proposals in response to the RFQ by June 8, followed by a request for proposal to select the winning team by the end of the calendar year. A new or significantly upgraded stadium, part of the project’s first phase, would open for the 2023 college football season. The 50,000-seat venue has been the home of University of Hawaii football since it opened in 1975.

There are three options under consideration as part of a master plan developed in conjunction with Crawford Architects, which has been working on the project for 18 months. Two options involve constructing a new venue to the west or south of Aloha Stadium. The third option focuses on renovating the 45-year-old facility.

The existing stadium has no premium seating and no modern fan amenities to speak of, compared with most college football venues. If the decision is made to rebuild Aloha Stadium where it now sits, it would still incorporate suites, club seats and loge boxes, along with creating opportunities to sell naming rights and founding partnerships, similar to the business model for new buildings, project officials said.

The components making up the district would be new construction. Over the next 15 years, the master plan calls for 641,000 square feet of retail and entertainment space, 1,810 residential units, 192,000 square feet of office space and a 620-room hotel.

On its own, a new or upgraded stadium is a critical piece of the overall development.

The Pro Bowl, the NFL’s postseason all-star game, was played at Aloha Stadium from 1979 to 2016, when the event moved to Orlando, Fla.

When it first opened, the $37 million stadium’s novel design had sections of movable seats to scale the building depending on the event. But over time, major expenses incurred to maintain Aloha Stadium have made it cost-prohibitive to keep the facility open long term, project officials said.

Over the past 12 years, the state has spent about $117 million to maintain the stadium as corrosion escalates in the infrastructure. If the stadium is kept in operation, about $400 million in repairs and upgrades would be required to conform with health and safety codes and ADA standards.

In July 2019, the governor signed legislation to develop a new stadium and entertainment district. Considering Hawaii’s football team has played its last 80 home games without a sellout, it makes sense to develop a stadium with 15,000 fewer seats, local media reported.

In its role as consultant, Crawford Architects is prohibited from competing for the project’s initial phase. The state is paying Crawford $5 million to develop the master plan and complete an environmental impact study before construction.