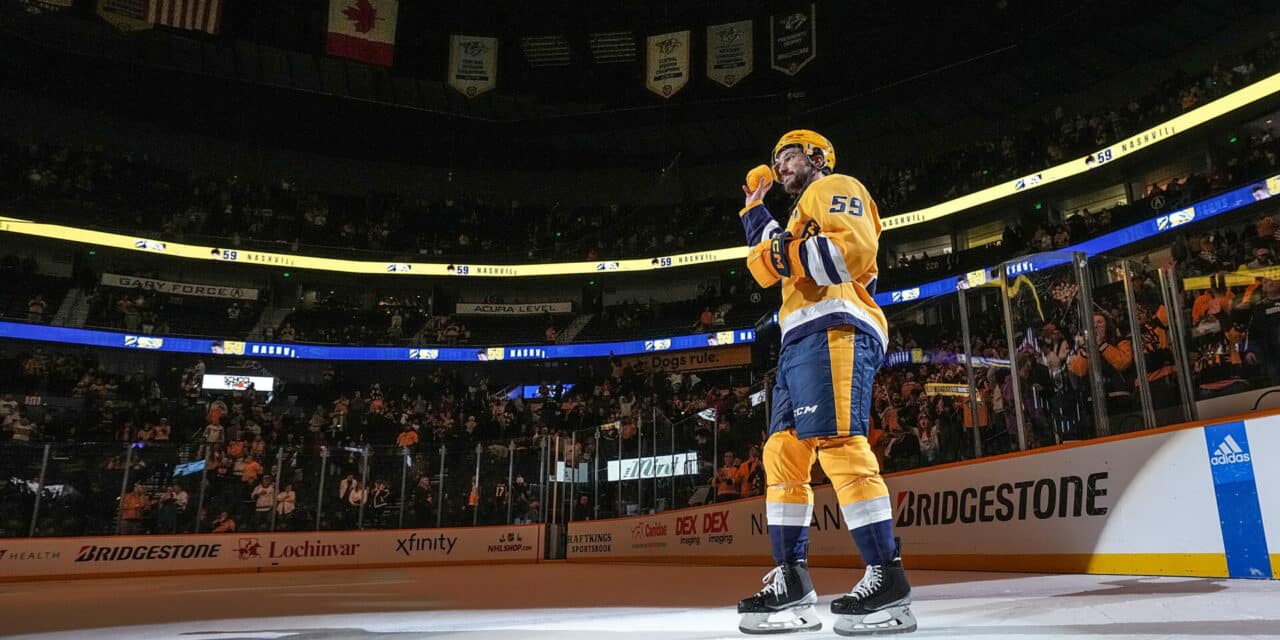 WAKE OF THE FLOOD: Nashville Predators defenseman Roman Josi gestures to the crowd after they beat Anaheim Ducks on Tuesday at Bridgestone Arena. The arena reopened for hockey four days after a broken water main flooded the venue. (Getty Images)

Bridgestone Arena reopened Tuesday after a quick recovery from a massive water main break over Thanksgiving weekend flooded the NHL facility. The Nashville Predators beat the Anaheim Ducks 2-1 in overtime before a capacity crowd of 17,159.

On Nov. 26, the day after Thanksgiving, a private water line burst up the street from the arena, flooding the concourse level and pouring down to event level, where most of the venue’s operational systems and highest-end premium club are situated. There was up to 3 feet of water inside the arena, with the deepest penetration at event level, said Sean Henry, the Nashville Predators’ president and CEO.

“If you would have been there that Friday at 11 a.m. and I told you we were going to play a hockey game in a few days, you would’ve laughed and said, ‘there’s no way in the world,'” Henry said.

As of mid-week, damage estimates had not been determined.

“Imagine Niagara Falls shooting into the building from 15 feet away because the main is underneath the sidewalk,” Henry said. “It ran that way for a few hours, packed with gravel and mud, which covered a lot of our systems. It shot around the concourse like a jet … and down the street like a raging river and some of the remnants ended up four blocks down the road.”

Henry got a phone call at about 5:45 a.m. Friday alerting him to arena flooding, and he rushed to downtown Nashville to help coordinate the emergency response with Tim Friedenberger, vice president of facility operations. The two have worked together dating to 1999 with the Tampa Bay Lightning.

Hundreds of volunteers from the team, arena, the city, neighboring hotels and the Music City Center, Nashville’s convention center, mobilized to lend assistance, whether it was grabbing squeegees to eliminate water, donating food to cleanup crews or providing stage equipment for arena events.

Case Restoration Company, a local firm which has done work for the Predators in the past and bought tickets to premium spaces, plus Jani-King, their janitorial sponsor, played key roles in the cleanup process.

“We brag about what (Case Restoration) is all the time and I’m so grateful that they’re our partner,” Henry said. “They have been with us every minute of the day. They reached out right away, bringing in giant tankers. Those trucks were non-stop, with every type of hose stretched out. We had over 1,000 fans blowing all over the building and brought in four dehumidifying trucks. It was an impressive thing to see.”

It’s not the first time Bridgestone Arena has flooded. In May 2010, a total of 13 inches of rain fell in Nashville, causing more than $2 billion in property damage to the region. In that instance, dirty sewage water came through from the ground up in the arena, severely affecting the event level. This time, it was clean water, but unfortunately it came from the concourse level, going through walls and ceilings, he said.

“The other thing was, in 2010, everybody was impacted; their houses were flooded, so you didn’t have that luxury of everyone pulling together,” Henry said. “Where we’re sitting right now is amazing. You hate ruining holiday weekends and postponing two games. But when something like this happens, a really good group of people get a little closer, and that’s what happened.”

In one respect, it was time for the local community to pay back the favor after Bridgestone Arena served as a safe haven and an emergency center after two incidents in 2020 — a tornado in March and the Christmas Day car bombing, a few blocks from the venue. When the tornado struck, the arena opened its doors to the public for running water, bathrooms, electricity. After the bombing, Bridgestone was converted to a temporary headquarters for local police and the FBI.

“You try and do the right thing and, more often than not, people respond in a nice way,” Henry said.

The flood damage should not affect $300-plus million in renovations planned over the next few years.

“If anything, some of our building systems we have to replace because of this will get an upgrade a little earlier than they normally would,” he said. “It doesn’t change anything.”

The next event at Bridgestone Arena is a Maren Morris concert on Friday.

“The show must go on and it will be a fun one, because she and her husband (singer Ryan Hurd) are huge hockey fans and season-ticket holders,” Henry said. “It nice to have a show for someone who uses the building as a fan so much, to appreciate what we’re going through.”