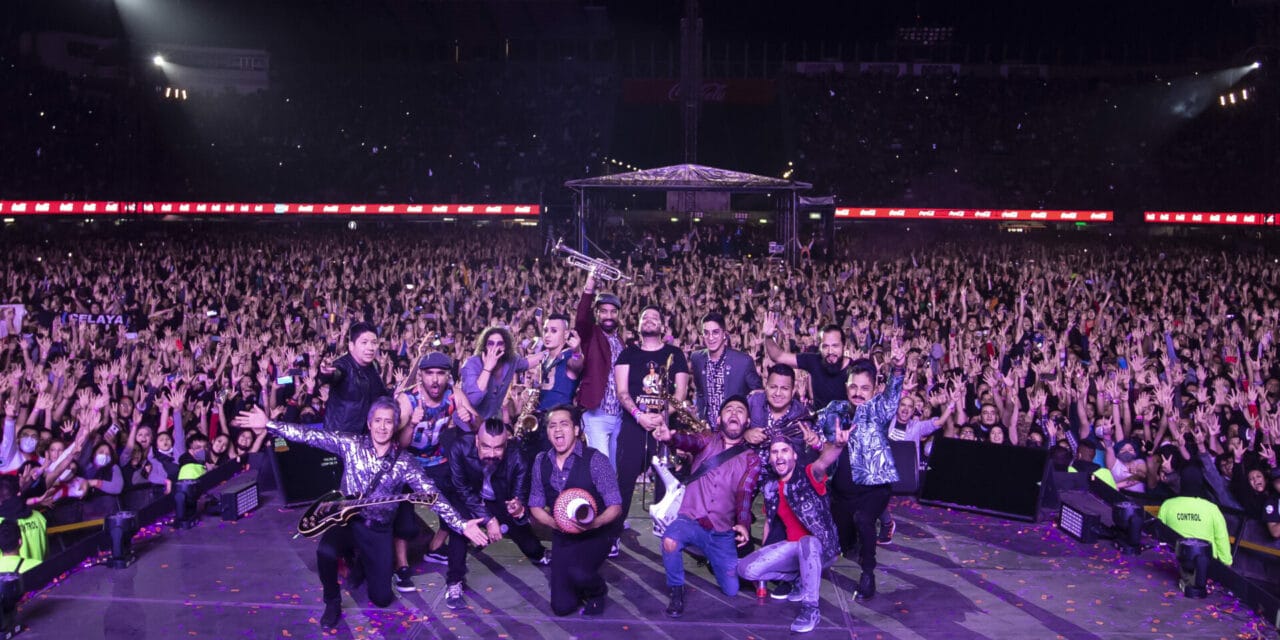 ‘We Were Surprised, Too’

VenuesNow’s Q1 2022 charts reflect what was still a difficult period for most. The Omicron variant led to difficulty doing indoor shows during what is an already typically slower period for concerts and live events. Country, comedy, holiday & family shows, a few smash tours and some major festivals kept the business afloat. However, one major event stands out.

On the Q1 Hot Tickets charts, behind only worldwide juggernaut BTS at SoFi Stadium (three shows) and the Radio City Rockettes (53 shows, different category) for the quarter is Mexican ska/punk band Panteón Rococó, who somewhat quietly became the first Mexican band to sell out three nights at Foro Sol in Mexico City, good for 175,129 tickets Dec. 10-12. Only five tours in the whole chart period reported more tickets than those three combined shows, according to Pollstar. 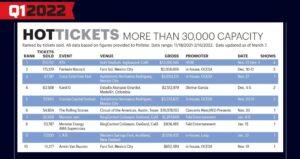 “We were surprised, too. I get paid to know these things and plan these things out and go, ‘Of course, we’ll do a Foro Sol and it’ll be fine,’” says Kevin Lawrie, who has managed the band for the last five years under his Hormiga Brava Management company, which he says entails him, his wife, his dog and a phone. While the band had played 17,000-capacity Mexican arenas including the Ciudad De México and Palacia de los Deportes, Lawrie, promoter OCESA and even the band was not sure they could pull off one stadium show. But, toward the end of 2019, they wanted to shoot big.

“The band was going to have their 25th anniversary, and we said, ‘You know what, let’s go for the Foro Sol’,” says Lawrie, whose experience includes running Sony’s Latin music label and who also manages Natalia LaFourcade. “We were very, very nervous about it, I have to say. These other dates in the 17,000-capacity venues didn’t sell out overnight.”

However, the strategy enacted a few years earlier appeared to be paying off. 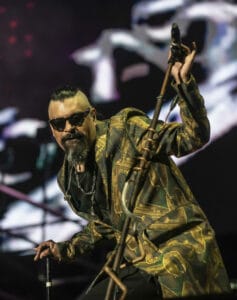 The Doctor Is In: The voice of Panteón Rococó, Dr. Shenka. (Courtesy Cesar Vicuña)

“What we did was in 2019 we just stopped doing all the free shows, the municipal shows,” says Lawrie. “They’re like the town fairs, if you will. It’s a very Mexican thing, bands just tour what they call the ferias.” Many Mexican artists, even very popular ones, will solely play a circuit of local events, soft-ticket plays similar to a fair or casino. In this case, the routine left the band not knowing what kind of hard-ticket draw they are even in their home market.

With the backing of promoter OCESA, a single Foro Sol show went on sale in February 2020, to take place in May, with COVID starting to make news but not seeming like a domestic problem.

“We said, ‘Hey, maybe it’ll take us a while but if we sell 30,000 tickets, it’ll look OK,’” Lawrie said. The show sold out in two or three days, with promoter rep Andres Sánchez asking if they wanted to add a second. “We were gobsmacked,” Lawrie says, laughing. “I was trying to pretend, ‘Of course we knew this was going to happen!’”

The band, with eight members and management all getting a vote on these kinds of decisions, elected to go for it, selling out the second date in another week and eventually adding a third show. That one sold another 30,000 tickets before the live entertainment business shut down altogether due to COVID-19.

While it took a while to get to December 2021, and to decide when the window would be appropriate to do the shows, Lawrie credits OCESA with pulling off the concerts during a still-difficult time when a lot of protocols were in place. Also he credits the fans for sticking with them.

“We put them through hell and of course the band through hell having to wait. But the concerts themselves were such a wonderful experience, and they went off without a hitch,” Lawrie says. “OCESA did an amazing job of keeping everyone calm and getting everyone in and everyone out.” 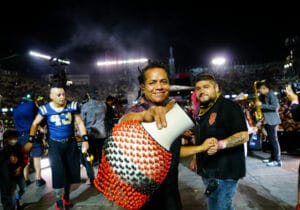 The band’s agent, John Pantle at Sound Talent Group, says they knew the band could do well and had the momentum to do something big, but still can’t say he knew they would blow out three Foro Sols.

“The idea that they sold three of these out is crazy from a marketing perspective,” says Pantle, who also represents LaFourcade among a varied roster that also includes Run DMC and Hatsune Miku. “No one will tell you we knew we were going to sell 175,000 tickets, that sounds crazy. But the fact is people were into the anniversary, and it shows the power of youth. This isn’t an audience that likes to be told what they like, they don’t like to be spoon fed. We came out of the box with a good idea, we didn’t announce any support, and the market responded.”

Ticket prices were kept low, starting around $25, and high-quality merchandise well below normal for a commercial concert of its size, in line with Panteón Rococó’s reputation for “protest music” largely in support of the indigenous Zapatista National Liberation Army, which came to prominence in the ‘90s demanding justice, food, land, work and democracy from the Mexican government.

“It really set a tone for how the band see themselves,” adds Pantle. “They see themselves not only as an emissary for the culture — the people that want to believe in positivity, equality, no discrimnation, fairness, working with others. The idea was to create a positive message but not be exclusionist.” Pantle would know, having played trombone for Mexican ska-punk band Tijuana No! He even got to join Panteón Rococó on stage during the Foro Sol gigs, which he joked was “no big deal.” Lawrie says the band put Pantle up to it, voting him to join them on stage after perhaps exaggerating or mis-remembering that he had played with Sublime and No Doubt.

Pantle says the band does well in the United States, selling out California venues such as House of Blues in San Diego and HoB Anaheim, where they just sold out two nights last week. They also do prominent festival gigs such as the upcoming Besame Mucho at Dodger Stadium in December.

Looking forward, and capitalizing on the Foro Sol victory as well as a new appreciation among younger fans, Lawrie says there’s a lot of work to be done in the States and Europe where the band is admittedly a relative unknown compared to Mexican groups such as Maná or Los Bukis. The band also has unfinished business in Germany, where it was popular but took some time off from in recent years.

But, back in its home market, the goal is not necessarily to go bigger but on their own terms, something that is not afforded when playing the feria circuit.

“We don’t think it’s trying to do four or five of these things some years down the road, or doing Estadio Azteca which is like 100,000 people – it becomes a little bit ridiculous,” says Lawrie. “The guys don’t look at it that way and we don’t look at it that way. But if you have a position of some influence, let’s do that in a positive way, get bands in front of people and try to take a little more control over the experience as opposed to just being on a festival with a 50-minute slot and with about 10 rules to abide by, in terms of sound and what you play. How do we take a little more creative control of that experience? Let’s figure out how we can do that, with a partner.”