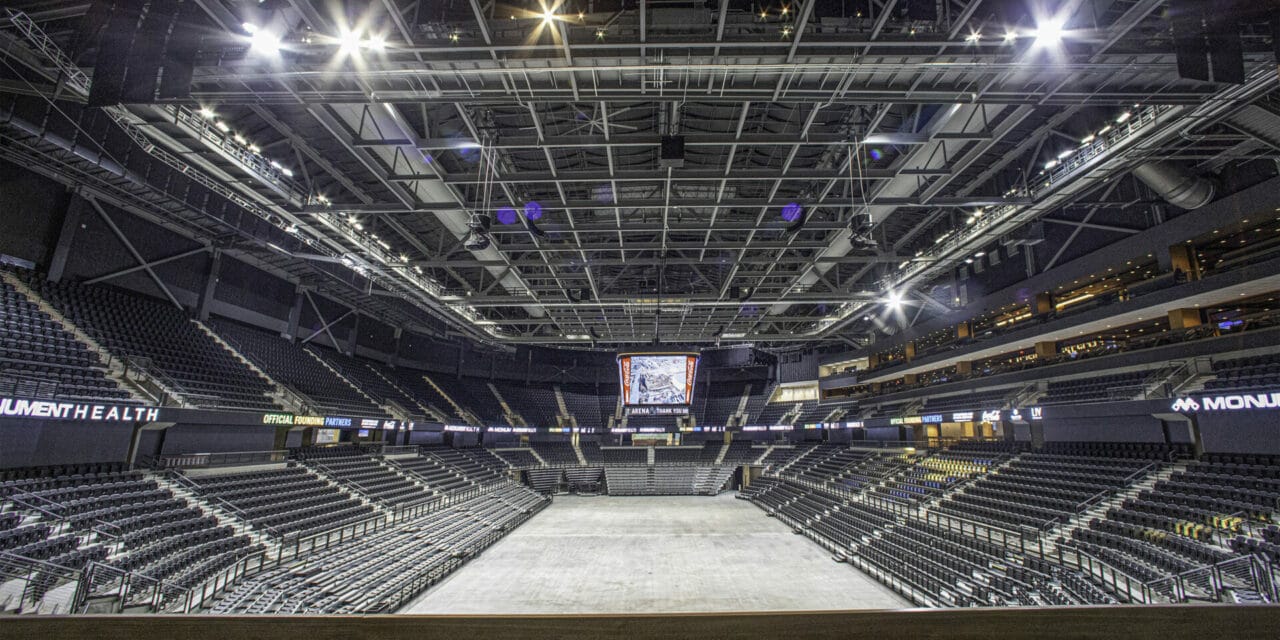 The $130 million Summit Arena was designed with all premium seats on the building’s north side, seen at right in this image. (Courtesy Perkins & Will)

The 10,000-capacity venue, a facility geared for concerts, has played host to a few events since it opened in mid-November, including performances by For King & Country and the Zac Brown Band.

Designed by Perkins & Will, the $130 million project stands out for all premium seats built across two levels on the arena’s north side. To a certain extent, it recalls the old layout at Philips Arena in Atlanta, now State Farm Arena.

It’s the newest midsize arena tied to that setup.

PPL Center in Allentown, Pennsylvania, which opened in 2014, also has premium seats stacked on one side of the facility. Enmarket Arena, a 10,000-seater set to open in Savannah, Georgia in mid-January, has a similar premium layout.

Perkins & Will designed both buildings.

In Rapid City, Summit Arena was designed with a single concourse and 360-degree circulation.

The design makes it easier for the in-house food service operation to move items up and down in the building, said Joe Dyer, Perkins & Will senior project manager and associate principal.

In addition, there are no suites at Summit Arena.

Market research dictated club seats would sell better in Rapid City. There’s a club lounge off the concourse with two levels of club seat products above.

The first level contains theater boxes, groups of four and six seats with cushioned chairs and a large bar behind the boxes.

The second level features about 200 traditional club seats tied to a lounge and one 10-person loge box that is sold for single events.

The decision to forego suites falls in line with the overall industry trend to design fewer suites at sports venues.

Summit Arena officials saw how the $150 million renovation unfolded at Target Center in neighboring Minnesota a few years ago, replacing multiple suites with club spaces. Perkins & Will designed those upgrades.

The same thing occurred with suite reductions at Amalie Arena in Tampa, home of the NHL Tampa Bay Lightning. Craig Baltzer, executive director of The Monument, a rebrand of the old Rushmore Plaza Civic Center complex, worked at the Tampa building when it opened in 1996.

“Today’s demographics don’t want to go to a big event and be locked in a room with their 10 best friends,” Baltzer said. “They want to socialize more. When we ran that concept by existing sponsors and suite holders in our (adjacent) ice arena, they all liked that idea.” 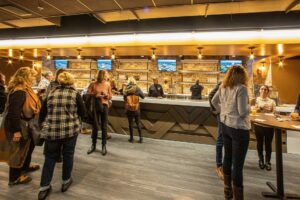 The Altitude by BHFCU club lounge at Summit Arena. (Courtesy Perkins & Will)

Eliminating suites also made sense in Rapid City due to its smaller corporate base in a community of 75,000 people. Going with three all-inclusive club seat products provides the city with flexibility for selling those seats, he said.

It was a bold move, Baltzer said, but it’s been a hit after the first few events due in part to that flexibility.

As it stands now, there’s a wait list for the 20 theater boxes, which are priced at $3,600 a person per year. The cost covers tickets to all events.

For the upper level club, branded as Altitude by BHFCU, a local credit union, the cost is $1,000 or $3,000 depending on the ticket package. There are 197 total seats.

On the low end, some seats are sold as more of a seat license model where customers pay for first access to buy tickets for all events, Baltzer said.

For Club Liv, the name of the club off the concourse, ticket packages for the 306 seats cost $1,800 a person annually.

Both Altitude and Club Liv are 50% sold, said Priscilla Domninguez, director of corporate sales and marketing.

The stacked premium design in an asymmetrical seating bowl supported by a single concourse helped keep the project on budget, according to Dyer.

“It really reduced the staff needed to operate the building in general,” he said. “One concourse serves everybody.”

Given those efficiencies, Baltzer said he had some initial concerns about the design affecting arena acoustics.

He placed calls to agents, production companies and promoter Live Nation to get their input and they told him not to skimp on sound baffles installed in the ceiling to help absorb sound during concerts.

Arena officials stood firm when that aspect came up during value engineering exercises.

“We wanted to make sure this building was excellent for shows and our audiences,” Baltzer said. “I was really happy to see that Zac Brown’s production crew went out of their way to tell us how great this room sounded.”

Summit Arena does have a sports tenant. The Rapid City Marshals, a member of Championship Indoor Football that starts its season in February.

But the focus remains on concerts to help bring major tours to Rapid City.

The 75-foot-long catwalk, an extra-large loading dock with four truck bays should make it easy for touring productions to come and go, Dyer said.

“We put all our money into making sure it operates well for shows and the architects found a way to make it beautiful anyway on our limited budget,” Baltzer joked.