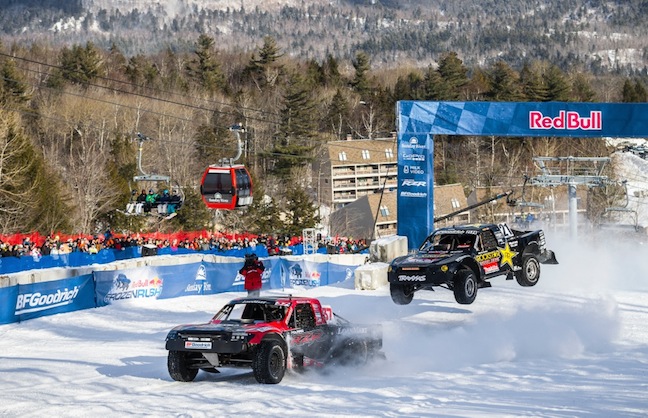 For many people, Red Bull is a beverage you slug when you need a pick-me-up during the third shift or a late night out at the bars. But for a whole generation, Red Bull is an action sports company that puts on some of the most radical, inventive live events on the planet: the ones where people get a chance to take to the air in their homemade flying machines or watch BMX riders zoom through downtown skyways.

These are not your parents’ sporting events, and the best part? Most of the time they’re free and tons of people show up to see something they’ve never witnessed before.

Among the most exciting events is their annual MOTO GP Grand Prix of the Americas race in Austin, Texas, at Circuit of the Americas entertainment complex. This year’s race took place on April 10-12 and featured attendance of more than 120,000 over the course of the weekend, according to COTA marketing coordinator John Patrick.

One of the premiere motorcycle road-racing events of the year, the race unfolds on COTA’s 3.4-mile track, which is the only FIA-grade track in the country cleared to host a Formula 1 event.

“The Moto GP is one of two races of its kind held in the U.S. every year and we’ve been hosting it for three years now,” said Patrick. Ticket packages for the 2015 race ranged from $39 GA one-day tickets ($49 on Sunday) to $179, 3-day passes on turn 1 and $899 for VIP packages. Patrick said the first day is popular because practice teams come in and get their bikes set up before Saturday’s qualifying rounds.

Patrick said the majority of the attendees are male, mostly single and in the 30-35 age range, with incomes between $75,000 and $85,000. What’s unique about the Red Bull MOTO – the company has been the title sponsor for the past two years — is that the title sponsor brings in some of its other signature entertainment elements to give the whole thing a festival atmosphere, including its Red Bull Air Force skydiving team, stunt planes and musical acts.

“It’s definitely one of our top events every year and not just in attendance, but also in fan participation and people getting excited for it and flying in from all over the world,” Patrick said.

A signature winter event, the Crashed Ice outdoor ice cross downhill skating race, had multiple stops this year, including Saint Paul, Minn., the Serena Ski Resort in Helsinki, Finland at the Stormont Parliament Buildings in February and the Shaw Conference Center in Edmonton, Alberta, in March. Ice and Moto are among the hundreds of events that Red Bull puts on in the U.S. alone every year, in addition to more than 1,000 around the world, according to spokesperson Patrice Radden.

The company has been bringing Crashed Ice to Saint Paul for the past four seasons and Adam Johnson, vice president of Marketing for Visit St. Paul, said the results have been spectacular.

“For us, as the self-proclaimed state of hockey, it takes skaters and puts them in front of people in a new, unusual way that is totally unique,” he said of the three-day event that typically takes place in late January or early February, drawing between 100,000 and 140,000 people. “I’ve never been in an Olympic winter village, but I would guess it’s like that level of excitement.”

Radden said the ideas for many of the events come from sources ranging from Red Bell employees to the athletes the company supports and opinion leaders in the various scenes Red Bull is involved in. Attendance ranges from 100,000 for the make-your-own-flying-machine event Red Bull Flugtag, to 30,000 ticketed attendees for Red Bull X Fighters and 1,200 for BC One.

Flugtag, a high-energy competition where teams vie to see who can fly their man-made machines the farthest after jumping off a pier into the water, is perennially one of RB’s most popular events. Since 1992, more than 100 Red Bull Flugtags have taken place around the world, attracting up to 300,000 for a single event. The Flugtag has visited Long Beach, Calif., twice and Bob Maguglin, director of public relations for the Long Beach Convention and Visitor’s Bureau, said both times huge crowds came out to see it. “We had estimates of around 100,000 people around Rainbow Harbor area downtown,” he said of the 2013 edition, which built on the already large crowd that came out in 2010.

The city also hosted a New Year’s Eve 2009 event where rally car champion Travis Pastrana jumped his Subaru 269 feet off the Long Beach Pier onto a floating barge in the harbor. “Every one of their events has turned out to be a huge party, with no problems at all and a boon for all the restaurants and shopping areas downtown,” said Maguglin, who noted that no future RB events are currently scheduled but that the city would gladly have RB back anytime.

“The audience definitely skews younger, but it was across every age range from young kids to families and senior citizens. And not only were the bars, restaurants and shops full, but people were renting boats tied to the docks to watch also.”

Always innovating, one of the most radical events RB has cooked up lately is the Red Bull Frozen Rush, which visited the Sunday River resort in Newry, Maine, during the first week of January.
“We definitely had never hosted an event like this before,” said Sunday River Director of Communications Sarah Devlin of the side-by-side truck race that takes place on one of the resort’s ski hills in vehicles outfitted with custom spiked tires to handle the terrain. More than 10,000 people came out in 2014 and 2015 for the free races, which also included pit tours that allowed attendees to visit with the world-famous racers best known for driving through deserts.

“The crowd was really excited to meet them and it brought nonskiers to the hill who got to see what our venue was like,” she said.

“It’s a way of showing that we are a large enough venue that can handle this kind of event and get some national and international press attention,” Devlin added of the resort that draws 500,000 visitors a year. “It’s the only truck race of its kind on a hill and it lets us be seen as a world-lass event venue.”

Devlin said the contract to hold Frozen Rush is renegotiated each year and was unable to provide specifics on the cost split of the event, but noted that RB designs the course with racers and Sunday River makes the snow and builds the venue – with jumps and berms – on its trails.

Because Red Bull is a privately-held company, Radden was not able to provide specific revenue or marketing data, but noted that because most events are one-offs and global, they often require air freight to transport their sizeable infrastructure.