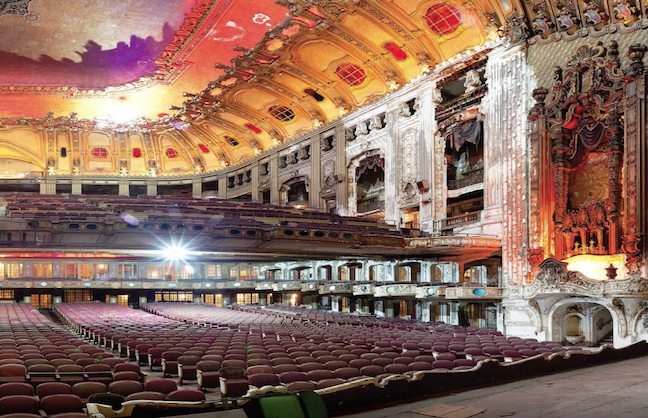 The mayor of Chicago and a ward alderman, along with Jam Productions co-owner Jerry Mickelson, are leading the charge to reopen Chicago’s historic Uptown Theatre, which has been closed since 1981.

“I discovered the Uptown in 1975,” Mickelson said. “It was a movie theater that was just showing movies. I made a deal with the owners to bring Jam's concerts there.”

On Oct. 31, 1975, the Tubes was the first show that Jam Productions brought, quickly followed by a roster of the biggest acts the '70s had to offer, including the Grateful Dead, Bruce Springsteen, Rod Stewart, Frank Zappa, Bob Marley, the Kinks, Supertramp and Boston. “Everyone who was big or coming up played Uptown Theatre,” Mickelson said.

“The last show we brought there was J. Giles Band on Dec. 1, 1981,” he said. “But by then the theater was in bad shape. It was cold and the owner could not afford the oil to heat the furnaces, which would heat the theater. The bathrooms were hardly functioning. I told the owner he had to close the theater.”

The building closed after that show. Mickelson loved the theater and followed its decline. “I tried to buy it several times but was unsuccessful until it went into foreclosure in 2008, when I purchased it at a foreclosure sale,” he said.

But 2008 was also the year the economy crashed. Mickelson’s investors disappeared. “I had the building but no money to fix it,” he recalled.

In historical theater circles, the Uptown was well-known as one of the primary big big-city theaters that remained to be rehabilitated. Speaking to Linda Deckard for VenuesNow's June issue, Evergreene Architectural Arts' Jeff Greene, who specializes in renovating such buildings, said, “There are a couple big theaters that haven’t been done, most notably the Uptown in Chicago. …It’s certainly the largest still standing, and we’re all waiting for it to happen in our lifetime.”

Mickelson said he “kept at it, and finally last year the mayor of Chicago, Rahm Emmanuel, and the 46th District ward alderman, James Cappleman, came to the rescue.”

Things all come together because the mayor wants to make the Uptown's North Side neighborhood Chicago's music entertainment district, he said.

Built for $4 million in 1925, today it will cost close to 20 times that, about $75 million, to renovate and reopen the theater as a first-class music venue.

The funding is coming from private sources, supported by tax credits and state grants. “The only way this theater can get the doors open is with the city and state being firmly behind the renovation,” Mickelson said.

Mickelson foresees about an 18-month restoration process before getting the doors open by 2020.

Designs have been created by local architect George Halik. “Because the building is landmarked, we have to get everything approved by the various governmental agencies,” Mickelson said. “Our goal is to re-create the venue as it was in its glory days, and we’re all on the same page, so we don’t expect any great hurdles to getting the approvals and starting the renovation.”

When finished, the Uptown will be the largest freestanding theater in the country. The building is 46,000 square feet, Mickelson said. “It’s got three entrances. It currently has 4,381 seats, but when we are done with the renovation we expect to have 4,200 reserved seats, with a tiered floor that can hold standing-room guests, so we’ll ultimately have a venue that can hold 5,800 people.”

The largest theater in Chicago right now is the Aragon Ballroom, which holds
4,900. “We’ll be larger and competitive,” he said.