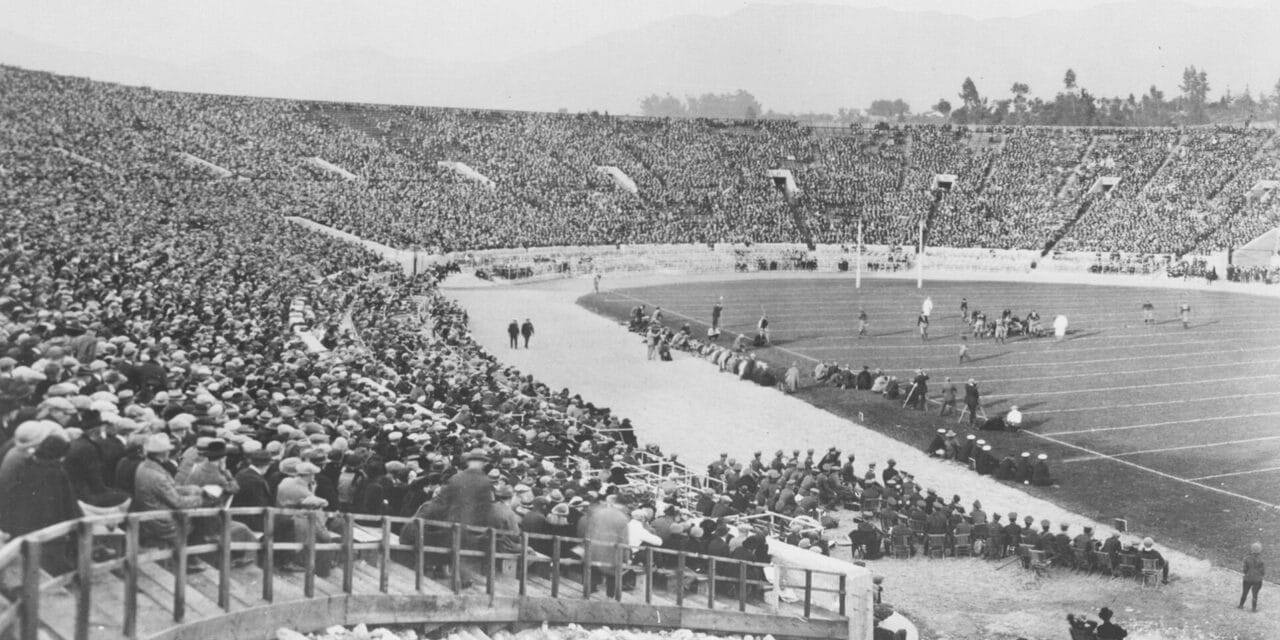 Rose Bowl Stadium is set to celebrate its 99th birthday for a year starting Thursday with a new centennial logo, a free party and activities for the public.

“I wouldn’t call it a complete rebrand, but more of a way to continue to define ourselves and celebrate the fact that very few venues and stadiums make it to such a historic moment in history,” said Meredith Thomas, the stadium’s director of communications.

“We wanted to find the right time to kick off our centennial celebration, and there’s no better milestone than the 99th birthday, in the middle of UCLA football season.” The Bruins are the stadium’s primary tenant and have played home games there since 1982.

A one-night celebration Thursday will offer complimentary tours of the stadium, free soft drinks and popcorn, and a screening of “Remember the Titans” on the venue’s videoboard. Guests will leave with a limited-edition collectors’ centennial pin.

“We have been working towards our centennial celebration for a few years now, and to think of reaching such an incredible milestone, that many never reach, is incredible,” said Darryl Dunn, chief executive officer and general manager of the stadium.

“We wouldn’t be here without the support of our tenants, partners, clients and the local Pasadena community so we look forward to celebrating this milestone together.”

The new logo will be unveiled Thursday as well.

“The logo was inspired by a design competition winner’s submission that took place in 2019,” Thomas said. The competition had more than 115 logo submissions and, in addition to the U.S., entries came in from Australia, Canada, China, Japan, Mexico, Europe, Argentina and Indonesia.

Rose Bowl Stadium is important to Thomas, who grew up in its shadow in Pasadena and has been in her position at the venue since July 2015.

“As a kid, I loved the buzz around the events,” said Thomas, who started as an intern for the Tournament of Roses Parade.

“I actually spent some time at Motorola and went into the tech world. I love events and the craziness and business around them. My roots are very Pasadena. I spent six years in Illinois and I missed home and everything that happens here in Pasadena that was so iconic.”

The centennial celebration will include a commemorative book honoring the stadium’s football games, concerts such as Depeche Mode and other events.

“The Rolling Stones were here at our venue (in 2019) and I had an opportunity to run their press room prior to their concert,” she said. “I stood and talked to them. These men are so talented, and they’ve been all around the world. I’ve been in the presence of some of these greats.

“It’s not every day that we’re around celebrities or high-profile people. Jimmy Carter spoke here. I joke all the time that I won’t be around for the next 100 so I want to enjoy this.”