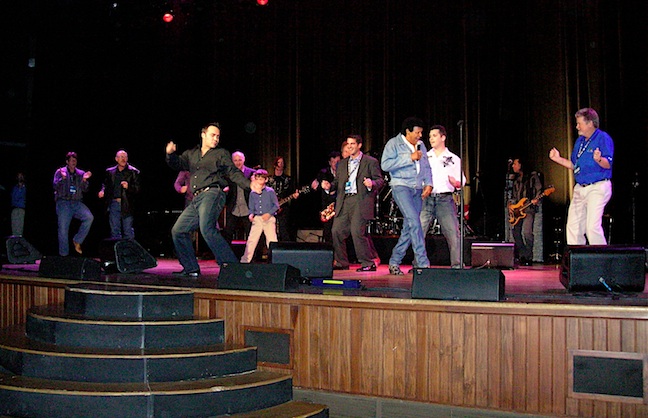 Chubby Checker is joined by various IEBA members on stage at the Ryman Auditorium in Nashville.

After the Grand Ole Opry finished its winter run at Nashville's iconic Ryman Auditorium Saturday, Feb. 4, the building was closed for two weeks while the floor of the stage is being replaced. Sally Williams, general manager of the Ryman, said the current stage was installed in 1951 and, after 61 years of wear and tear from thousands of events, “it’s time to give the Ryman a new stage.”

Oak planks are being replaced with Brazilian teak certified by the Forest Stewardship Council. This is the same type of wood used when the Grand Ole Opry House stage had to be replaced after the 2010 flood.

“We chose FSC-certified Brazilian Teak for the new stage because teak is among the hardest, most durable woods on the planet,” said Williams. “And by working with FSC, we also know that the wood was responsibly harvested, which is in line with our commitment to sustainability.

“The weight-bearing capacity of the new stage will be increased to 120,000 pounds as opposed to 40,000 pounds. This means the new stage will stand up better to the strenuous production elements of modern concert tours and television shows. As caretakers of this National Historic Landmark, our goal always is to preserve the historical integrity of the Ryman while maintaining its vitality as a world-class performance venue,” Williams added.

The weight-bearing capacity will be increased by strengthening the existing hickory support beams with concrete at the bases, and the joists will be reinforced with steel brackets. New cross-beams will be put in place to further enhance the structural integrity of the stage. The size of the stage will remain the same, at 60.5 feet by 36.5 feet.

Planners for the new stage are keeping a part of the Opry history alive. An eighteen inch strip of the oak planks from the current stage will run along the front of the new stage. Williams noted, “Artists still will have the opportunity to stand on the same wood planks where their heroes like Elvis and Hank Sr. stood, and fans who visit the Ryman to take tours will be able to have their photos taken standing on those same wood planks.”

Early in its history the building was renovated so that specific performances could take place. When it opened in 1892, the building was called the Union Gospel Tabernacle and its main performances were revivals preached by Reverend Sam Jones. There was no stage, but the Fisk Jubilee Singers and John Philip Sousa performed there. The building was renamed the Ryman Auditorium after Tom Ryman, the man who built the venue for Jones, died in 1904.

In 1901 the Metropolitan Opera requested that a stage be built in the facility so that it could accommodate performances of “Carmen” and “The Barber of Seville.” This allowed a wider diversity of performers to come there, including Louis Armstrong, Bob Hope, Harry Houdini and Mae West.

The Grand Ole Opry moved to the Ryman in 1943, remaining there until 1974, when the new Grand Ole Opry house was built. “The Johnny Cash Show” taped at the Ryman, with guests ranging from Neil Diamond to Stevie Wonder, Eric Clapton’s Derek & The Dominos and Linda Ronstadt.

In 1951 The Ryman’s existing stage was removed and replaced by a larger, more durable stage that allowed the building to meet the production needs of performances at the time. In 1994, other renovations took place including the addition of a proscenium as well as accommodations for modern audio and lighting systems.

Since that time the Ryman has hosted entertainers including Kid Rock, Harry Connick, Jr., Kris Kristofferson, Lady Antebellum, The Raconteurs and Robert Plant. The Ryman has also been featured in many television and film projects including “American Idol,” Levon Helm’s “Ramble at the Ryman” and “O Brother, Where Art Thou?”

Williams commented on the diversity of performers, saying, “We make history one night at a time with performances that just cannot be replicated at any other venue – partially due to our acoustics and intimate setting, partially because of our history, partially due to the passion of Nashville music fans. Our patrons know that here they will have only-at-the-Ryman moments, whether that’s seeing Taylor Swift perform with The Civil Wars for the first time or witnessing rock and roll legends like Bruce Springsteen in the intimate setting of a venue that only holds 2,362 patrons instead of the usual arena setting.”

Beech Construction Services based in Smyrna, Tenn., is handling the project. Williams said they have worked on previous projects at the Ryman and also at the Opry House. “They work very well with the Ryman team and really understand the importance of preserving the integrity of the Ryman,” she explained. Williams declined to give the cost of the renovation.

When the project gets underway on February 4, workers will be there a minimum of 12 hours a day, seven days a week to complete the project within the allotted time. Around-the-clock security will be in place while the current stage is dismantled and the oak planks removed to a safe, off-site location.

The final solo event at the Ryman was Dierks Bentley’s show on Thursday, Feb. 2. The Grand Ole Opry was there on Friday Feb. 3. The first public performance on the new stage floor will be The Band Perry, who will perform there on Feb. 20.