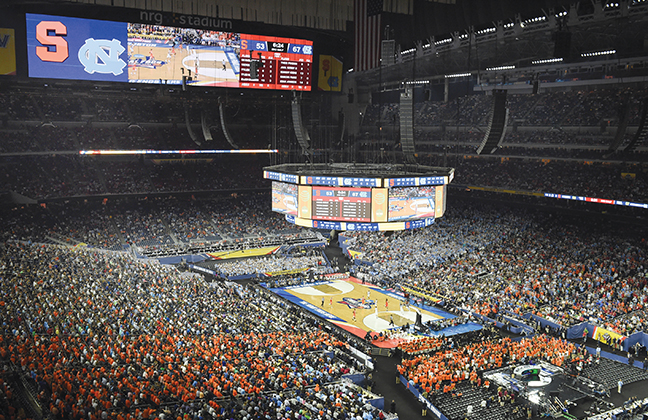 While most eyes were focusing on the basketball inside San Antonio’s Alamodome during the NCAA Final Four recently, a few folks in the venue were worrying more about future games.
Because major events are awarded well in advance, building managers spend years prepping to host, taking in events across multiple venues as a way to learn best practices for when their time comes. It is no different for Patrick Talty, general manager of U.S. Bank Stadium in Minneapolis, host of the next year’s Final Four, and Scott Jenkins, general manager of Mercedes-Benz Stadium in Atlanta, the 2020 host.

“Fortunately, we have seen (the Final Four) in a few places already, so we know what to expect,” Jenkins said. “I think now that we are two years away, we are getting into the weeds of what it is like to convert the stadium into a basketball arena.”

Talty worked Final Fours at the RCA Dome in Indianapolis in 1997 and 2000, but he has attended the last three Final Fours to see how the event has evolved and grown. “We went to see how the game had changed and all the added elements,” he said. Two years ago at NRG Stadium in Houston, Talty specifically scoped out the setup with the court centered in the football stadium, which he had not seen in person before.

Now one year away from hosting, Talty has embedded some of his events staff into the San Antonio event, working with the NCAA on everything from crowd flow and how to handle student seating to how to clean the building between games and how much fans eat and drink. “All those things we are going and watching, and our team will see and it will help us prepare ourselves,” he said. What they saw in San Antonio, he said, will translate to what they will do in Minneapolis.

Every year they learn a little more about the process, but the U.S. Bank Stadium staff still wanted more information on how buildings handled student ticket distribution and team locker room access. They’ll also watched food and beverage closely. “How much are they eating, when do they go to the lines, what are the lines like?” he asked. “We need to prepare and manage.”
Talty knows his venue will have some differences from San Antonio, Houston and Phoenix. The temporary seating needs a custom configuration because no two seating bowls are the same. Jenkins and his crew — he also had five staff members embedded in San Antonio — paid special attention to the seating area in San Antonio, too. They’ll do a partial installation in Atlanta in June to ensure their plan works.

“We are going to reconfigure the lower seating bowl to bring the seating up to the edge of the basketball court,” Jenkins said. “It is a geometry issue to solve. Every stadium is a little different, and getting a chance to do a portion of it will be a nice box to check to understand what it will be like.”

Jenkins said San Antonio gave his team a chance to look at how to handle practices, team movements through the building, media accommodations, band movements and student sections. He also wanted to learn how the city dealt with all the extra events that surround the basketball.

Technology offers another learning curve. With a building that opened in 2016, Talty said, the technological infrastructure of U.S. Bank Stadium should easily handle the load of a Final Four — they did, after all, successfully pull off the Super Bowl earlier this year —but there are still things to figure out. “The seating is different and it affects Wi-Fi coverage,” Talty said. “Those are things we specifically want to learn.”

Minneapolis does pose one unique challenge, however, that nothing in San Antonio will help teach: how to handle all the glass and the transparent roof. The NCAA requires that the lighting environment be the same throughout the weekend, whether at Friday’s practices, the semifinals on Saturday or the championship game Monday evening. Talty said they have an active RFP seeking a darkening solution for the windows and roof, and responses are due late in March.