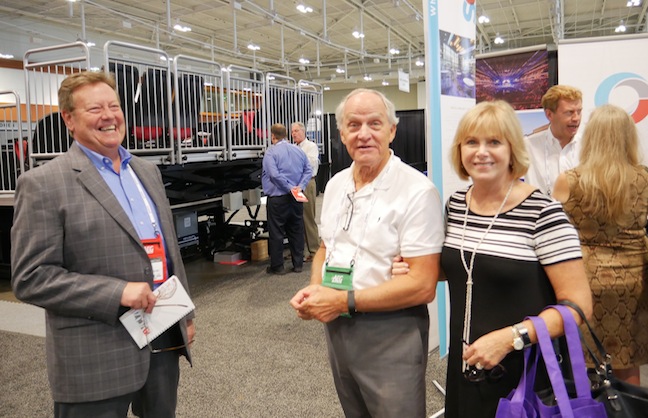 Having built and managed some of the highest profile sports and entertainment projects and facilities worldwide, Sims Hinds has joined Oak View Group as VP of Development.

“If there’s a venue and a market with a lot of potential, we just want to build the relationship. We want to be allowed to grow it, grow the business and build the reputation,” Hinds said of his new role. He sees considerable growth potential for OVG. “There are a lot of markets today that are very successful event buildings that, before they were built 10-15 years ago, people didn’t think they were real markets. There are more and more emerging markets around the country with significant growth in population and with the right venue, those markets explode.”

This is a reunion for Hinds, who in the past had worked with Irving Azoff and Tim Leiweke, co-founders of OVG; Peter Luukko, co-chair of the Arena Alliance and leader of OVG Facilities; and Tom Paquette and Doug Higgons of Pinnacle Venue Services, which was just purchased by OVG.

Hinds started in the venue side of the business working for SMG in 1988, when Luukko was also there. “Both Doug and Tom worked for me right out of college and we all worked for Globe Facility Services.”

“Sims is a titan in our business with unrivaled experience in developing and operating facilities,” said Leiweke, OVG CEO, in a statement. “Many of us at OVG have worked with him for decades and bringing him on board provides considerable added value for the Arena Alliance and all of our partners.”

Leiweke brought Hinds on board at AEG Facilities in 2006, when Leiweke was president and CEO there. As AEG Facilities Senior Vice President of Business Development, Hinds helped the company achieve dramatic growth.

“We feel that, certainly with our collective experience, myself, Tim, Sims, Doug and Tom, it’s a business that is a natural evolution of what we’re doing with our Alliance,” Luukko said. “We’re in sports and entertainment, the venue business.  We all have experience in venues, and we feel it is a sector we want to get into.”

Prior to his time with OVG, Hinds spent his career working with organizations such as The Walt Disney Company, the PGA Tour, the Atlantic Coast Conference (ACC), Live Nation and many others. He’s held senior positions at some of the industry’s most recognized companies, including Concerts West, SMG, the Carolina Hurricanes and HKS World Events.

Recently, Hinds has worked with development of downtown High Point, N.C., on a mixed-use district anchored by a multipurpose stadium; a new arena in Virginia Beach, Va.; expansion and renovation of Rupp Arena Sports, Entertainment and Arts District in Lexington, Ky.; and more.

Oak View Group was founded in 2015 by Leiweke and Azoff to be a positive disruption in sports and entertainment and currently has offices in Los Angeles and New York. OVG’s business divisions include OVG Business Development, OVG Global Partnerships, OVG Media and Conferences, Prevent Advisors and the Arena Alliance.