SMG Recommended to Manage the Greek 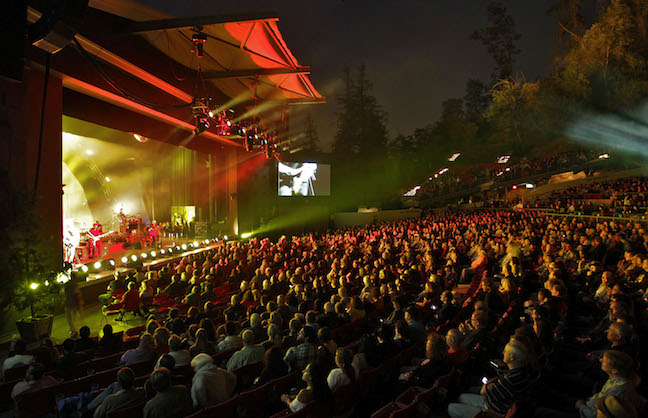 SMG has been recommended to manage The Greek, Los Angeles, for 2016, with two one-year options to renew. It is to be a flat-fee management contract with the L.A. Department of Recreation and Parks board of commissioners. In addition, SMG would receive up to 25 percent of sponsorships and box seat sales, said Mike Shull, general manager of the department.

Shull said he will present the selection to the board on Sept. 2 or Sept. 16, pending preparation of the paperwork. In addition, there is an RFP out for food and drink, due next week. Aramark is currently concessionaire at the Greek.

The changeover from Nederlander Concerts, manager there for the past 40 years, is set for Nov. 1.

Alex Hodges, CEO, Nederlander Concerts, said his staff is winding down the 2015 season, with 26-27 dates left, ending Oct. 29 with Walk the Moon “unless something else comes in.” At the same time they are dealing with human resources and inventory issues.

“We’re looking at the labor laws,” Hodges said. “We have to give official notices to everyone that we won’t be their employer anymore. And there’s inventory of equipment and furniture.”

Parking and security would come under the auspices of SMG under the new deal.

Hodges was hopeful new management will keep the majority of the staff. Full-time staff, like Rena Wasserman, general manager of the Greek for Nederlander, whose year-round office is at the Greek, will move to Nederlander’s existing offices at the Pantages in Hollywood. Hodges already works from there.

Nederlander is also involved in participating in the new system of booking the Greek, which Shull said is a hybrid of the system used at the city-run Red Rocks Amphitheater in Denver. A month ago, the city held a lottery in which promoters put holds on dates for the 2016 Greek season.

A typical season consists of 65-70 shows and involves up to 200 holds throughout the process, Hodges said. He understood there are 800 holds on 2016 dates at the Greek as of now, 100 of which are from Nederlander. SMG will not be allowed to promote in-house.

Shull said holds are still coming in on a daily basis and that they have 250 applications, all with an artist's name attached. Each application can have up to five hold dates and each artist can be named on up to 10 applications. Shull’s department is currently keeper of the calendar, noting holds don’t mean anything and duplication is rampant. “None of that information is public,” he said.

The rubber meets the road when promoters claim or challenge a date, putting down $25,000, nonrefundable, to buy that date, with confirmation promised in 48 hours.

As of mid-August, 2016 touring plans are not known, Hodges said. The active calendar is day to day. “In this case, my holds were really requested by an agent, manager or artist,” he said, but no one knows who will be touring when yet.

Normally, as of August 2015, Hodges might have expected a few dozen holds on 2016 dates, all meaningful inquiries from agents.

Most artists probably are unaware their names are on hold at the Greek, he said. Promoters probably made assumptions based on past seasons at the Greek. Also, unlike Denver, there are plenty of similar-sized venues in Los Angeles if the Greek isn’t available, though as a loyal, longtime manager, Hodges also noted “all artists love the Greek.”

Nobody knows who is on hold. “That’s kind of weird,” Hodges admitted. But it’s also very early in the game. When a name surfaces for real, he is ready and willing to challenge any other holds.

It is frustrating to a promoter/manager/agent like Hodges who knows what’s involved. He recalled it took years to convince Neil Diamond to play five days at the Greek in 2012, honoring his Hot August Nights album, and Hodges had to hold all of August while negotiating that deal. Making history that way might be difficult under this system.

Should this process stall or the climate change with the city, Nederlander is certainly interested in re-upping its management of the Greek. “If there is an invitation, we’re on board. We’re not going anywhere,” Hodges said.

Shull said this has been a good process, a good RFP, with good proposals this round, which was a regroup from the original intention to award management to Live Nation. Only time will tell if it’s the right road to take and the city will reevaluate everything as it goes forward. “We’re not making any long-term deals,” Shull said. “But for now, somebody has to win.”