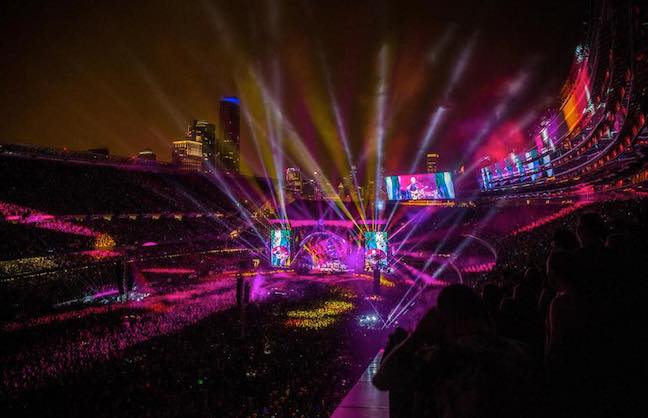 Summer at Soldier Field stadium, Chicago, is shaping up to be one of the busiest yet. With an unprecedented number of concert tours and sporting events, the SMG staff is definitely staying busy, but they’re not complaining.

“It was the hottest ticket of the summer,” said LeFevour. “I think there was an article in Chicago that the number one venue in the United States over Fourth of July weekend was Soldier Field, because of the Grateful Dead concerts.”

The stadium’s normal seating capacity tops out at 63,500, but with the concert set up and standing room only on the field, they were able to pack in 71,000 people each night, which means they hosted over 213,000 people over the three days. That doesn’t account for the mob of people hanging out outside the stadium, listening from outside.

“There were those who didn’t have tickets who just wanted to be part of the experience,” said LeFevour. “Thousands of people just stood outside the stadium to try and hear the music from outside.”

It’s no surprise that there were at least a few thousand ticketless people trying to enjoy the show when you consider how many requests for tickets they received.

“Don Sullivan from Madison House Presents probably had the best line of all when he said, when the show went on sale, there were roughly 213,000 tickets available for Soldier Field, and they had over 4 million requests for tickets,” said LeFevour.

With over 70,000 people at the stadium each night, it’s no wonder that Aramark set a new concessions record over the weekend. Food and beverage per caps alone totaled $32, including merchandise, that number went up to $50.

“I take a look at our big client, the Chicago Bears, and their average on a good day like against Green Bay would be $24 per person,” said LeFevour. “So you’re doubling that.”

LeFevour said there wasn’t any one food item or drink in particular that was especially popular, it was simply “everything and anything” edible. Aramark was able to reload all three days without issue, working around the police-issued fence around Soldier Field.

“The Chicago Police, due to the demand for tickets, asked SMG to place a security fence perimeter around Soldier Field,” said LeFevour. “SMG, Aramark and all subs had to make arrangements to load in all necessary supplies prior to the lockdown on Friday morning.”

LeFevour estimated that over half the audience was from out of town. On the first night, some petitioned to be able to camp out on the property and in the parking lot, but the request was denied, because it’s on the lakefront in downtown Chicago.

“They filled every hotel room in Chicago,” said LeFevour. “In fact, there were a couple restaurant owners who said thank you, because they came to the restaurants, they ate and they had a great time. It was one of those monumental weekends for Chicago, not only for Soldier Field, but the city itself and what they were able to enjoy for this weekend.”

There was an area outside the stadium that was used for a small festival, but the staff and promoters wanted to keep the focus on Grateful Dead and letting the fans enjoy the band, so they didn’t put on other events or entertainment around it.

“What I love about this crowd is I have never seen a crowd that said thank you more than these fans as they were leaving the stadium,” said LeFevour. “They were thanking us for a great night, a beautiful venue and for our hard work in putting the event on. It was just a terrific experience.”

And Soldier Field isn’t stopping there. Today, the stadium will be full once again for a Gold Cup doubleheader before beginning load in for Taylor Swift’s July 18 show on Monday. The stadium already hosted Kenny Chesney and Miranda Lambert at the beginning of June and will soon welcome thousands of One Direction fans for the group’s Aug. 23 show.