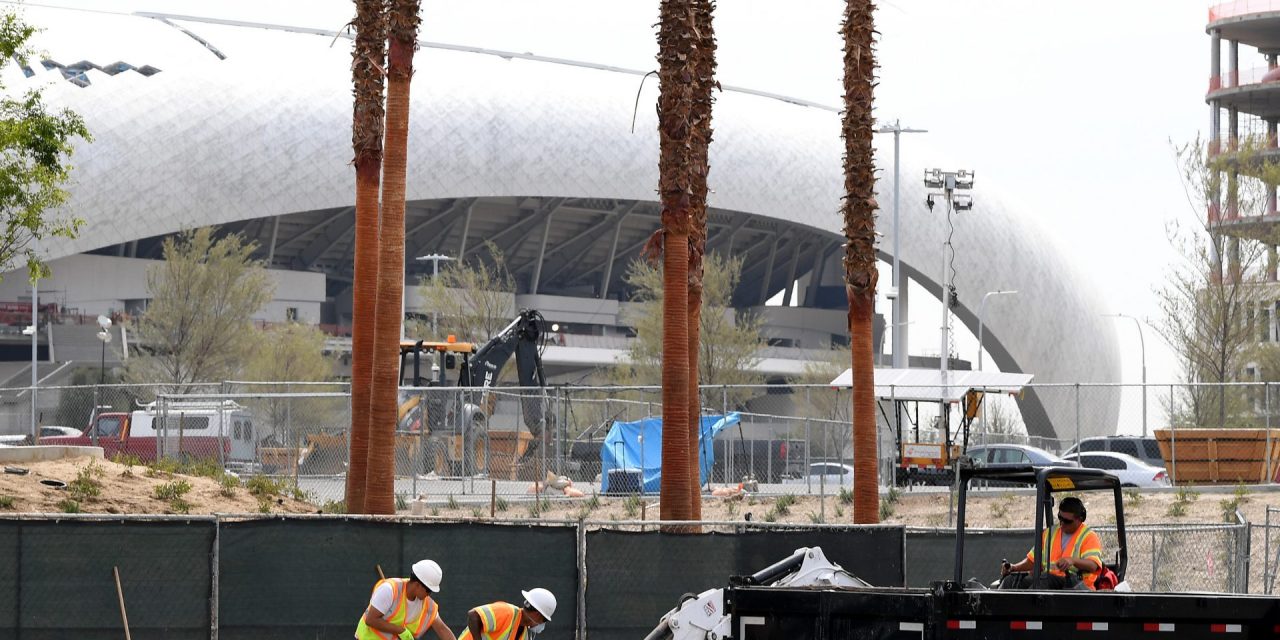 Construction workers are shown on the job in March at SoFi Stadium, which is scheduled to open for the coming NFL season.  (Getty Images)

Square, the mobile payment platform embraced by tech geeks while expanding its point-of-sale technology to sports venues, has landed its biggest account to date: the new $5 billion SoFi Stadium in Inglewood, Calif.

Legends Hospitality, the stadium’s food provider, will use the system for its operations at the 70,000-seat home of the Los Angeles Rams and Los Angeles Chargers, sources said.

Officials with the Los Angeles Sports and Entertainment District, the operating entity for the stadium and the adjoining 300-acre mixed-use development, declined to comment on the selection.

Square officials said they could not comment on whether the stadium will use its point-of-sale system.

The big question during the pandemic is when Square’s technology will be activated for the coming NFL season as the league looks at the possibility of games played in empty stadiums.

Regardless, it’s a huge victory for one of the newest players in the evolving point-of-sale space, which has taken on greater significance as teams and vendors upgrade their systems to protect fans and employees in the post-COVID age. Jack Dorsey, Twitter’s founder and CEO, launched Square in 2009, three years after forming one of the world’s most lucrative social media networks.

Square’s sports clients include Chase Center, the Golden State Warriors’ arena, which opened in September 2019, and Nationals Park, where MLB’s Washington Nationals play. Its competitors include Appetize and Bypass in mobile point-of-sale, as well as longtime suppliers Micros and NCR.

In San Francisco, Square created a POS system that met the unique demands of an arena environment with a user-friendly interface for the customer, said Kim Stone, Chase Center’s general manager. For the Warriors, the technology provided insightful data that the team used to quickly streamline its business to ensure a high level of guest satisfaction, a key metric for the arena, Stone said.

At SoFi Stadium, Square provides Legends with some flexibility in the future where teams and concessionaires are pushing cashless operations with greater urgency, although a bill is pending in the California legislature that would ban cashless retail.

“We’re obligated to take cash … and are revising our protocols to ensure those (transactions) are done in a safe manner for both the staff and the guests,” she said.

Square offers its Cash App, one payment source to avoid installing reverse ATMs, like the ones in place at Mercedes-Benz Stadium in Atlanta to accommodate fans with cash only, said Mike Plutino, founder and CEO of consultancy Food Service Matters.

Those machines cost about $20,000, an expensive investment considering how little they’re used to convert cash to a debit card, said Todd Merry, chief marketing officer of Delaware North Sportservice. In Atlanta, about 1 percent of patrons used the machines for NFL games and MLS matches over the past year, said officials with AMB Sports & Entertainment, the stadium’s operator.

Delaware North owns and operates TD Garden in Boston, home of the NHL’s Bruins and the NBA’s Celtics, and runs the arena’s food service. The state of Massachusetts requires cash as an option for payment of services, Merry said. During the national shutdown, company officials have researched more cashless solutions for the arena, among the first big league venues to adopt ApplePay years ago.

“The cost of those machines, the administration of it … it might be a short-term plug,” Merry said. “We’ll have something like that or maybe have customer service handle the conversion.”

Square owns Cash App, which allows registered customers to send and receive money through their mobile devices without having to visit an ATM. Funds are added by using a debit card tied to a bank account. A Cash App user can also apply for a free Visa debit card linked to an account.

“Square is incredibly optimistic about the growth of their Cash App,” Plutino said. “It’s a natural solution. Their point-of-sale has been really successful at Chase Center and a platform people are using more and more now, just moving cash around. We’re going to see Square grow on the sports side. Cash App does what a debit card does.”

For the industry as a whole, the concern is that Square’s back-of-house software and security compliance is “somewhat suspect,” consultant Chris Bigelow said, based on feedback he’s heard from clients and vendors.

“Some concessionaires and universities will not allow it to be used because they say it’s not a secure network,” he said.  “But the people that have used it love it. It’s very simple. You just need to build your own back-of-house software for reports, because it’s not set up to do that.”

Mobile on the Move: When fans return to sports venues, they’ll see more touchless options for ordering and buying concessions