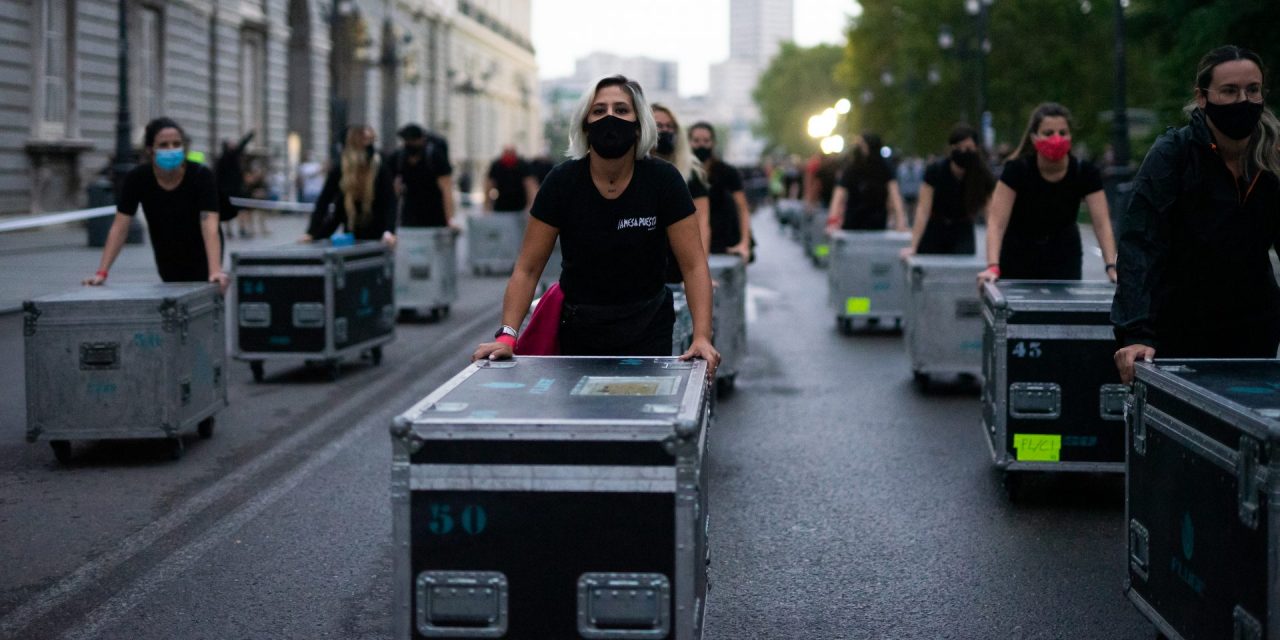 Demonstrators roll flight cases down a street in Madrid on Sept. 17. (Getty Images)

The Spanish music industry celebrated Alerta Roja, or Red Alert day, on Sept. 17, illuminating landmark buildings in red to remind everyone of the severe effect that government-imposed restrictions have had on the sector.

Ninety music associations from 28 Spanish cities joined in the demonstrations, with many production pros rolling flight cases through town, similar to the recent flight case march in Manchester, England.

The movement began in the U.K., and U.S. venues were bathed in red light Sept. 1 to support the cause.

Thousands of artists from all genres and ages supported the campaign in Spain. It received widespread media coverage and was a trending topic on Spanish social media during the day.

One venue that joined the protests was the Palacío Vistalegre in the Spanish capital of Madrid.

Building managing director Daniela Bosé said the Spanish government leaves it up to the country’s autonomous regions, the Comunidades Autónomas, to decide the extent of the novel coronavirus measures they want to take.

“In the case of Madrid, it also depends on the license that you have, if you are a small venue like a bar and disco or an arena,” she said.

The Palacío Vistalegre could host 14,000 people but for now can host less than 3,000 to allow for the required  distance between patrons.

A building of this size cannot operate profitably under these circumstances, and Bosé confirmed as much.

She said there was no date on the horizon indicating that the situation in the country might change, and a second wave of COVID-19 could mean a tightening of restrictions again in Madrid.

Allowing venue operators to reopen at capacity, without distancing in place, will be the most important factor in order to survive this crisis, Bosé said.

The safety of fans could be assured via mandatory masks, “and, of course, sufficient air ventilation, disinfectants, access control, security, tracking of tickets, etc.,” she said.