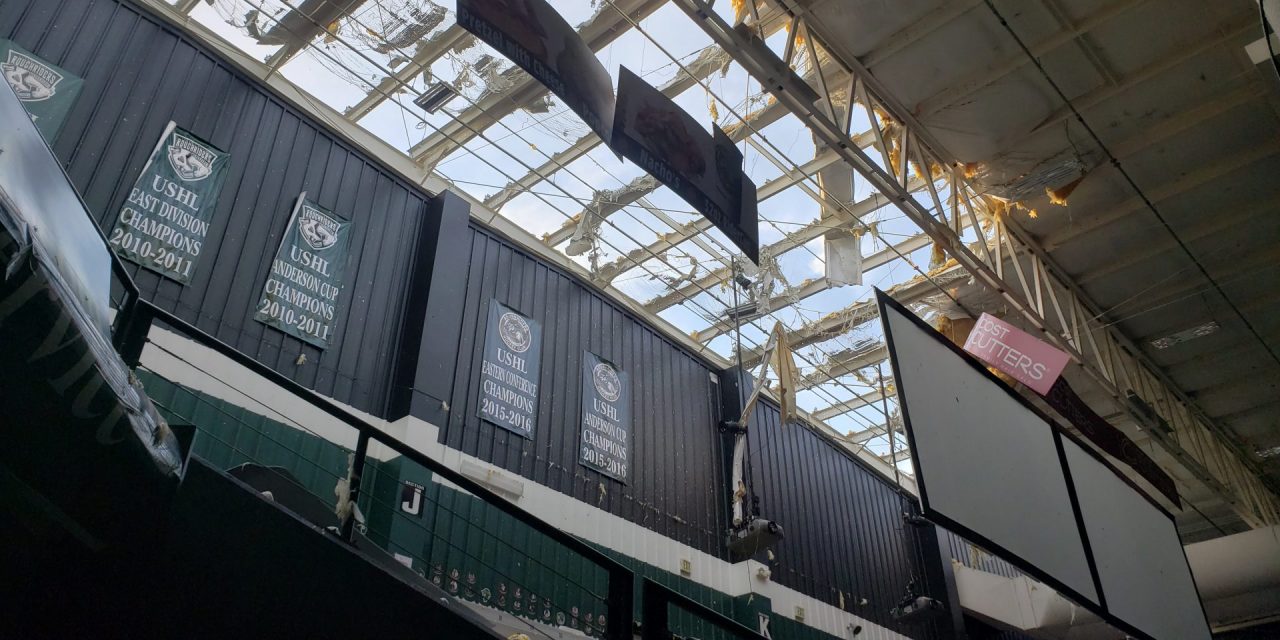 Multiple sports and entertainment venues in Iowa suffered extensive damage from a freak storm packing winds of more than 100 mph that flattened homes, uprooted trees and left tens of thousands of residents without power for several days.

On Aug. 10, a derecho, best described as an inland hurricane, swept across a 75-mile swath of central and eastern Iowa, devastating parts of Ames, Cedar Rapids and Des Moines, the state capital. The storm blew through several Midwestern states.

A pair of United States Hockey League venues took direct hits. The storm blew the roof off of Buccaneer Arena in Des Moines and tore gaping holes in the roof and east wall of ImOn Ice Arena in Cedar Rapids. Both facilities are home to junior league hockey teams.

Straight-line winds equal to those of a Category 2 hurricane collapsed part of the outfield wall and a light tower at Veterans Memorial Stadium, home of the Cedar Rapids Kernels, a Minnesota Twins minor league affiliate. The ballpark’s concourse was damaged as well.

VenuWorks, whose headquarters are in Ames, runs four facilities in Cedar Rapids: the ice arena; U.S. Cellular Center, a 10,000-capacity arena; the historic Paramount Theatre; and McGrath Amphitheatre, a small outdoor music venue along the banks of the Cedar River.

The arena and the Paramount had minor damage, said Mike Silva, VenuWorks’ executive director in Cedar Rapids. U.S. Cellular Center, where Silva took shelter during the storm, opened this week for local residents displaced from their homes to charge cell phones, use Wi-Fi and cool off in an air-conditioned setting.

About 10 days after the storm, damage estimates for most venues were unknown. Insurance adjusters are busy inspecting damaged homes in Cedar Rapids, the state’s second-biggest city with 133,000 people, and they haven’t had time to check the entertainment facilities, Silva said.

The same is true in Ames, where 51-year-old Stephens Auditorium had a few plate glass windows blown out and lots of water damage, said Tammy Koolbeck, VenuWorks’ executive director of the Iowa State Center, a group of venues on the Iowa State University campus. It could take a few months for the windows, which are custom made in Germany, to be replaced at the 2,747-seat theater, Koolbeck said.

Jack Trice Stadium, the Big 12 school’s football facility, was not damaged, but a dozen large hospitality tents set up for the season next to the stadium blew away. Four of them were salvaged, she said. 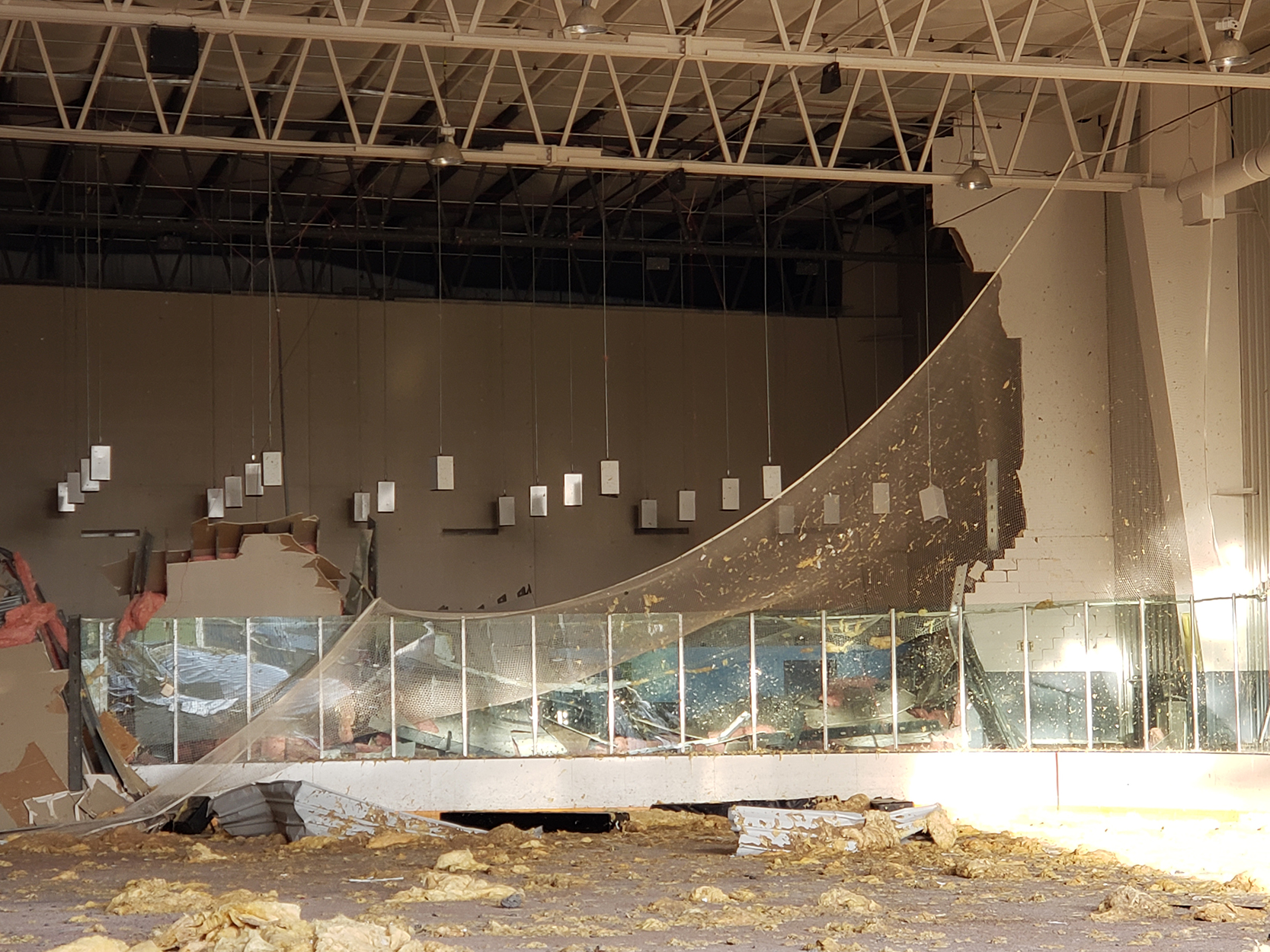 High winds tore a hole in a wall of the ImOn Ice Arena. (Mike Silva)

Wells Fargo Arena and the Iowa Events Center convention complex in Des Moines, plus the new Xtream Arena opening this fall in Coralville, a suburb of Iowa City, had minor damage, said John Page, president of venue management for Spectra, the operator of those facilities.

In Davenport, a pedestal marquee was ruined at the Adler Theatre, another VenuWorks account, Koolbeck said.

On Monday, a week after the storm, President Donald Trump signed an emergency declaration to help supply federal money for Iowa’s recovery. It covers less than half of the state’s 43 counties needing assistance, according to local reports.

The timing couldn’t be worse, considering it comes during the pandemic.

In Cedar Rapids, two concerts VenuWorks had booked for the amphitheater this weekend were canceled because power couldn’t be restored in time. There is also a shortage of generators, plus portable toilets used for events.

The amphitheater is essentially a concrete pad with a rigging grid and a grass berm, with all portable seats. The structure is part of the city’s levee system and it’s designed to be flooded when the river rises, Silva said.

The Beach Boys and Josh Turner were going to be the first concerts in town since mid-March with the 4,000-capacity venue scaled down to 1,300 with social distance seating. Josh Turner was sold out and the Beach Boys, headed by original member Mike Love, were close to a sellout after a last-minute booking, Silva said.

“We can’t fill the rider requirements,” he said. “The warehouses have all blown away, so anywhere we were going to get tents is gone. The Beach Boys always require (faux) palm trees and surfboards to decorate the site, and those can’t be found. Everything has been devastated.”

Seventy percent of VenuWorks’ full-time and part-time staff in town have been on furlough over the past five months, and many of them have to wait a while longer to go back to work. In Cedar Rapids, the company has 25 full-timers and up to 400 event day workers.

“We thought we were going to get people back to work,” Silva said. “We were recalling some of the furloughed staff to support the amphitheater season and then had to call them back and say, ‘Sorry, it’s not going to happen.’”

The 22-year-old ice arena, closed since March 17 after the governor shut down event centers statewide, was in the midst of a $3 million project to install a new ice plant. It was a few weeks from completion when the storm peeled away a big chunk of the sheet metal infrastructure.

“The contractor said to me the next day (after the storm) that he couldn’t finish the project because we don’t have a roof to replace the remaining units,” Silva said. “We were set to reopen for public skating at the end of August. Now that’s sidelined because there’s a big hole in the side of the building. The wind was so fierce that it bent the upright structural corner, twisted it like it was paper.”

The good news is Iowans are a resilient bunch. In Cedar Rapids, it’s the second natural disaster to hit the city in a dozen years after a massive flood in 2008 left the downtown district and much of the southwest side under water. Silva opened Nationwide Arena in Columbus, Ohio, in 2000 before running Petersen Events Center in Pittsburgh. He arrived in Cedar Rapids in 2014.

As of Tuesday, Silva had been without power at home for nine days, as have a few other full-time staffers.

It hasn’t stopped them from volunteering to serve meals for those without power who can’t cook at home. Some food trucks tied to Operation BBQ Relief, a nonprofit group, are set up around town, through the efforts of NFL Hall of Fame quarterback Kurt Warner and PGA Tour golfer Zach Johnson. Both grew up in Cedar Rapids.

“This is not the first time Cedar Rapids has been challenged,” Silva said. “People say, ‘We’ve had practice now.’ For our industry and the four buildings already affected by COVID, we were just starting to get back on our feet, and this was a real gut punch.”