Tech Serves Up a Round of Higher Per Caps 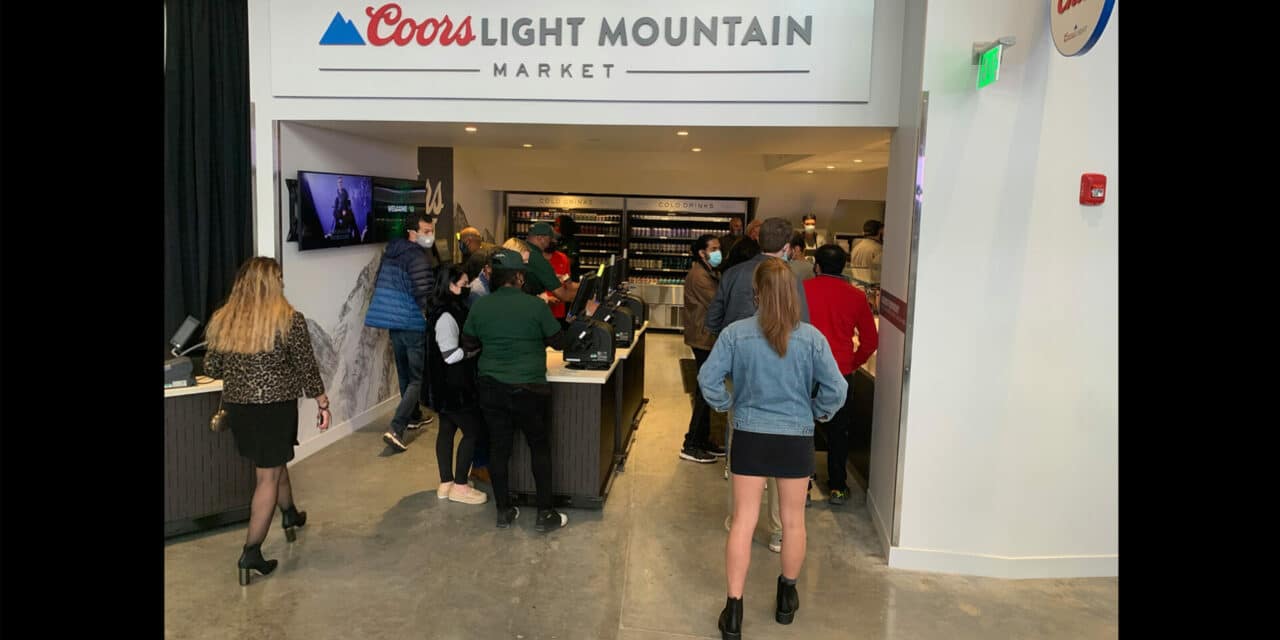 The 17,000-seat arena, home of the NHL expansion Seattle Kraken, held a private show with Foo Fighters  on Oct. 19 for construction workers, vendors and suppliers, which served as a soft opening of sorts.

The first official public event was Coldplay on Friday, followed by the Kraken home opener the next night vs. Vancouver.

Delaware North Sportservice, the arena concessionaire, did not release food and drink per caps per the Kraken’s request.

The typical per cap is $25 for an NHL regular season game, said consultant Chris Bigelow. The average spend for all three events was much higher than that number, sources said.

Sportservice officials did provide a few nuggets of information to shed light on how the new technology drove sales over the old belly-up model. The food vendor opened four autonomous markets using Amazon technology, plus 17 other themed markets tied to self-service kiosks. 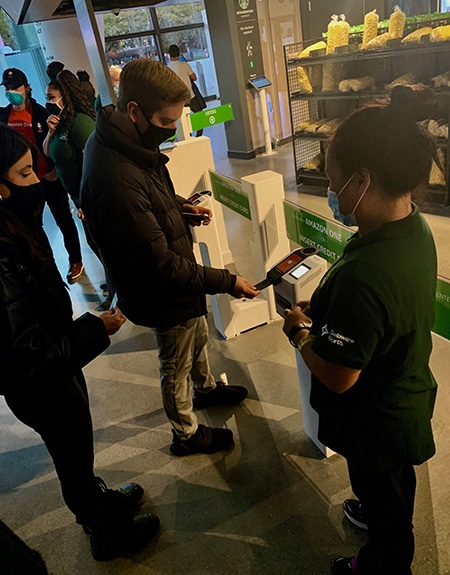 Fans line up to enter one of the Amazon markets employing Just Walk Out technology. (Don Muret / Staff)

For the first few events, sales at Shaq’s Big Chicken and Lil’ Woody’s, a local burger brand, both part of Amazon locations on the lower concourse, were strong and about 25% higher than a regular concession stand of that size, due in part to greater speed of service and efficiency.

In addition, candy sales at the four Amazon locations were about double what Sportservice does at other arenas.

The biggest marketplace on the lower concourse has 23 points of sale and there were no lines at that location for Saturday’s Kraken opener, said Ken Gaber, Delaware North’s vice president of strategic operations.

The upper concourse is narrow, resulting in some pinch points during the Coldplay concert. On that level, there was a long line at the smaller Big Chicken location, a self-checkout stand, but it moved fairly quickly for those waiting to buy a sandwich and a beer.

One surprising trend was the large amount of food sold for the two concerts.

“Typically, it’s high consumption of beverages,” Gaber said. “But that’s the goal of these marketplaces as well — for every two beverages, sell one food item. It helps us be more responsible for customers drinking alcohol, as well as getting more food over the counter and raising our per caps. With increased speed of service, we could do that.”

Moving forward, Sportservice will make some adjustments to include additional capacity for grill spaces at some of its “harder-hit areas” and more fryers for Shaq’s Big Chicken stands due to the overwhelming response for that brand.

For Foo Fighters, those chicken sandwiches were the second most requested item behind beer, Tim Leiweke, chairman and co-founder of Oak View Group, the arena developer, told the crowd at the VenuesNow Conference.

“One thing that came up that was an aha moment was a lot of people on the upper concourse didn’t realize they could take the escalator down to the lower concourse and buy concessions there,” Gaber said.

“We got a little more (dispersion) on Saturday with fans milling around the building,” he said. “We will post messages on social media, send email blasts and put up more signs in-venue.”

To fully staff opening week, Sportservice brought in more than 100 managers from around the country across multiple divisions, including parks and resorts, gaming and the corporate office in Buffalo, New York.

“It’s one of the most important things that we had going on with our company other than the Atlanta Braves going to the World Series,” Gaber said. “It’s our first major opening with OVG, and we wanted to make sure it was a success.”

There have been 650 to 700 part-timers employed for the first few events as Sportservice made sure it had an abundance of workers to combat the labor shortage during the pandemic.

“We’re always hiring,” Gaber said. “We’ve got some long homestands and back-to-back events and want to make sure burnout is not a factor in the decision for them coming to work.”

In a tech-centric city, patrons loved the overall system and adapted to the new methods of ordering food and paying for it, Gaber said.

For the Amazon Just Walk Out locations, accessible by credit card or a palm print tied to a registration process that takes about 30 seconds, it took a while for patrons to fully understand the process for entering and exiting those marketplaces, considering they didn’t have to check out at a register or kiosk, Gaber said.

“It’s just a matter of getting people more used to it, and that’s one of the challenges,” he said. “A lot of people were stopping at the gates (after picking up items) and said, ‘What do I do know?’ It’s just different, the fact you literally walk out after grabbing hot food, beverages and snacks.”

The learning curve was fairly short over the course of the week, according to Gaber.

At the Amazon locations, sales doubled at the first Kraken game compared with the Coldplay show.

For the second home game Oct. 25 against Montreal, sales doubled again over the opener, Gaber said.

For the self-checkout markets, a different system, customer feedback indicated they were more familiar with the process because it’s similar to what they go through at the grocery when buying a few items.

“That was the point of what we were trying to do, taking that technology that they see every day into the arena, so we don’t have to educate them as much,” Gaber said. “They already know how to use it. We made sure that any additional buttons they would normally have to push to initiate the system were all gone and all they had to do was scan the item and pay with credit card.”

Similar to supermarkets, the Toshiba point-of-sale system automatically stops when scanning a container of alcohol to allow Sportservice attendants to check the customer’s ID and verify the legal age to buy beer and wine.

“In that case, there alway has to be some sort of guest interaction,” Gaber said. “The Amazon locations on the upper concourse are (age) 21-plus stands, so we’re checking IDs before they walk in,” Gaber said.