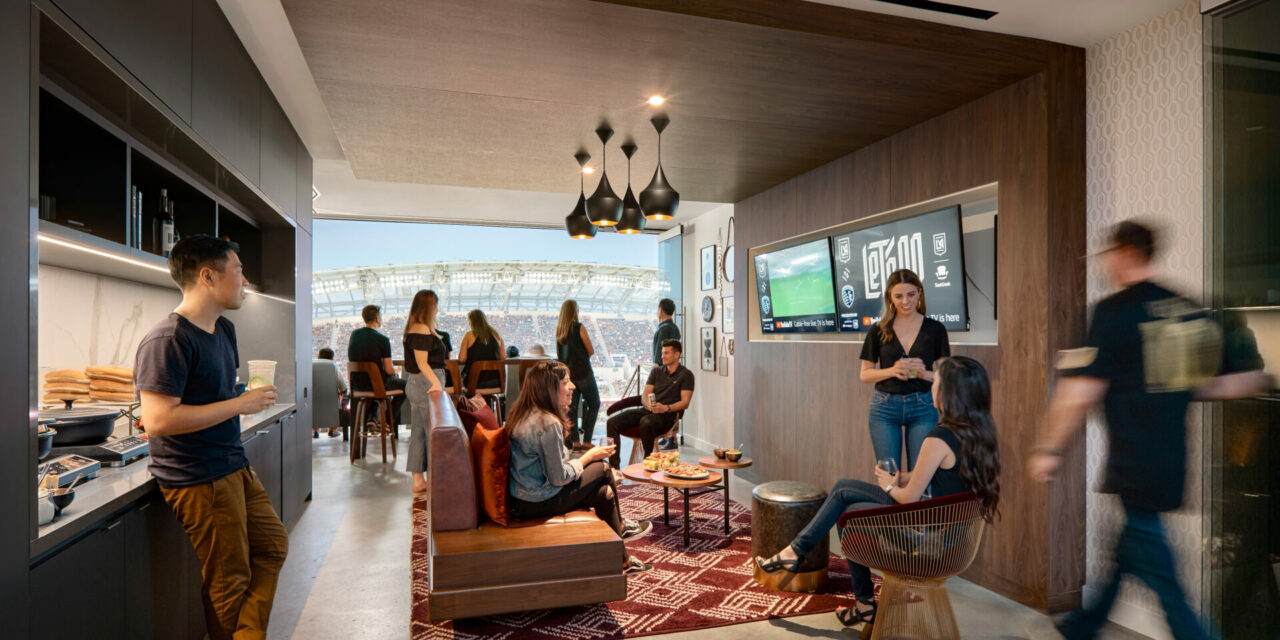 SUNNY SIDE UP: The Sunset Deck suites are among the premium inventory at Banc of California Stadium, home of Major League Soccer’s LAFC. (Courtesy team)

TicketManager, a provider of software to help teams and corporations manage premium ticket inventory, has signed a deal with Los Angeles Football Club that extends to a sponsorship with the Major League Soccer team.

The multiyear agreement gives TicketManager the exclusive rights to serve as LAFC’s official corporate ticket management solution, according to Troy Tutt, the company’s head of strategic partnerships. Terms were not disclosed.

It’s the first deal of its kind for the vendor in a strategic move to expand its roster of big league clients, said Tutt, former executive director of premium sales and service for the New York Yankees.

For corporate clients, the resale component is part of the package. The fees charged to license TicketManager’s software varies depending on the number of tickets a client manages on the platform. Tutt declined to provide a range of costs.

Coming out of the pandemic, corporate clients are placing greater focus on eliminating wasted tickets. Corporate hospitality is no longer considered to be a “loss leader” and companies are searching for other options to get their tickets used at events.  Tutt said many firms now resell tickets on their own without a uniform platform tied to the team and TicketManager’s system helps resolves that issue.

TicketManager selected LAFC to launch the initiative because it’s in the second-largest U.S. market and the team books a large number of special events at the stadium apart from soccer matches. LAFC’s on-field performance and the game day experience were other factors, Tutt said.

The vendor is negotiating similar agreements with other teams but no deals have been signed, he said.

On its own, LAFC has been a TicketManager customer since 2019 and the new agreement expands the online tool to their highest-paying customers.

To date, the team has used the technology to make it easier to manage its internal inventory, particularly complimentary tickets, said Larry Freedman, LAFC’s co-president and chief business officer. The initial deal was driven by the club’s push to go paperless prior to the pandemic, make it as frictionless as possible and get a better understanding of who’s using those tickets to generate incremental revenue, Freedman said.

“The same logic applies to a corporate partner that maybe has a suite for the season but also has a couple big hospitality nights,” he said. “Data rules the world, so knowing who’s coming, when they’re coming, who gets tickets and doesn’t show and who gets tickets and transfers them forward carries significant value,” he said. “With tools like this, it’s so easy for the partner to manage what they have and do it efficiently and effectively.”

For TicketManager, the sponsorship introduces a new category, Tutt said. It runs separate from LAFC’s deal with Ticketmaster, their primary and secondary ticketing provider.

“We’re not shy … if somebody is a partner of ours and they deliver for us, we’ll stand on the mountain tops and talk about it, because that’s only right,” Freedman said. “In return, we would like some support too. It’s a bit of a subset of the bigger picture of ticketing, which has become much more robust. The definition has expanded with all these integrated technologies that help you with different elements within the world of ticketing.”

As part of the sponsorship, TicketManager receives assets that include digital messages on television monitors within suites and club lounges at Banc of California Stadium, LAFC’s 4-year-old facility. In addition, TicketManager has the right to place their representatives on site during events to meet with prospects among the team’s corporate clients that don’t currently use their system.

“What we did previously was a benefit to teams to get us in the hands of their corporate clients to get better utilization and prove ROI so they’re more likely to renew their deals,” Tutt said. “This (new model) puts it on steroids and takes it to a higher level so we’re front and center with corporations to help them sell unused tickets.”

TicketManager, a 14-year-old firm, is headquartered in Calabasas, California. The company generates $25 million in yearly revenue tied to 700 clients. Many are Fortune 100 companies that purchase suites, club seats, loge boxes and general seats to entertain their customers. All told, about 600 clients are corporations and the rest are teams, managing a total of 5 million tickets on the platform.

Its competitors include Ovations and Concierge Live, as well as the Golden State Warriors’ suite resale program that the NBA team has taken to market to sell their proprietary software system to other big league clubs.

TicketManager’s technology syncs with the team’s primary ticketing system, whether it’s Ticketmaster, SeatGeek, Tickets.com or Paciolan, among other providers. Unlike those vendors, TicketManager does not work with personal ticket buyers and ticket brokers. It works strictly with corporate clients and teams.

In southern California, LAFC clients can load tickets on the platform for events from other venues in the market where they have premium seats, which is a plus from an adoption and data standpoint, Tutt said.

“Anecdotally, this is going to be really successful,” Freedman said. “If you’re not having an ongoing dialogue with your partners about what’s working for them and what’s not, you’re not doing a good job of managing those partnerships. This a moderate pain point for folks. To let them know that they’re going to have access to this tool that will make it seamless and they will get good information back, that makes people happy.”