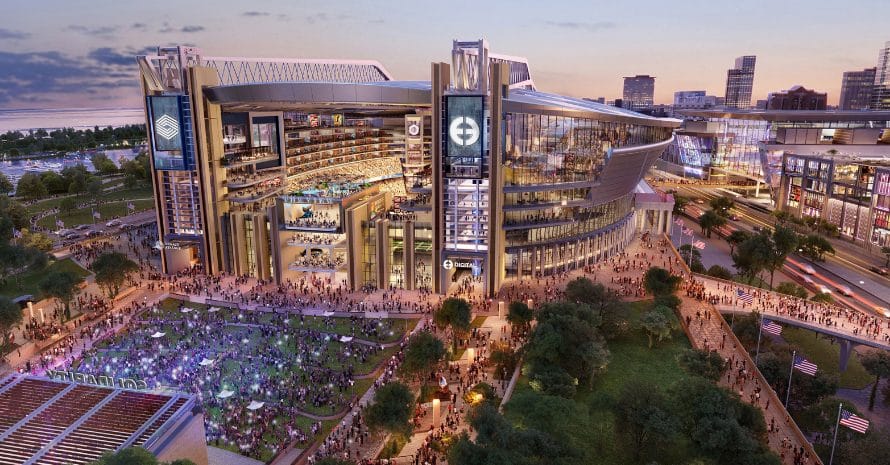 SOLDIER OF FORTUNE: Landmark Development released new renderings and a video of a major renovation of Soldier Field, tied to One Central, an entertainment district across Lake Shore Drive in Chicago. (Courtesy Landmark)

Chicago’s “Hail Mary” plan to keep the Bears in city

Landmark Development’s bold vision to transform Soldier Field into the future generation of sports and entertainment palaces may be too late to keep the Chicago Bears in town, but it’s not stopping city leaders and their consultant from releasing splashy videos and renderings for a total makeover of the stadium, tied to a proposed entertainment district and transit hub across the street.

This week, the developer, working on behalf of the city of Chicago, released a six-minute sizzle video and fresh renderings of a reimagined Soldier Field. The video is augmented by the dulcet tones of Chicago broadcast legend Bill Kurtis, as he describes the wonders of a revamped stadium layout with a clear roof enclosure, six new clubs and about 10,000 more seats. The plan is to connect the stadium to the entertainment district by a skybridge over Lake Shore Drive, a major downtown thoroughfare.

“We felt it was important to put the vision out there to give the Bears an alternative to consider,” said Landmark Development President Bob Dunn, a familiar name in sports venue development from working on four NFL projects over the past 20 years. “We have not reviewed it with the Bears. They’re under an exclusivity agreement and may very likely end up in Arlington Heights, but we wanted to prove that Soldier Field can become the No. 1 venue in sports in this country.”

He said, “The location is unmatched and if you can solve the transit issues, you can build an entertainment district, remake the operating structure and get out from under the punitive lease in place there and retool it like in so many other cases.” 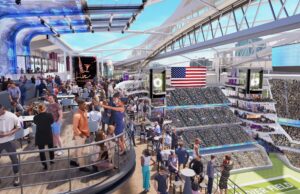 SKY’S THE LIMIT: An upper deck gathering space at renovated Soldier Field is close to the roofline in this image. (Landmark)

In response to the images, the Bears issued a statement that they remain committed to pursuing a new stadium on the site of Arlington International Racecourse, which closed in 2021. In September of that year, the Bears signed an agreement to purchase the 326-acre property for $197 million from Churchill Downs Inc.

To date, the transaction has not been completed as the Bears are in the early stages of negotiating a potential deal with the village of Arlington Heights to help finance construction for a project estimated to cost $5 billion, which includes the entertainment district.

Watching the Landmark video, skeptics may see the two lakefront developments as the second coming of Fantasyland, considering the immense scope, total cost and the question of public financing after the city of Chicago committed to funding most of Soldier Field’s $600-plus million renovation 20 years ago, in which it’s still paying off the bonds issued for that project. Many fans feel those upgrades fell short of improving their experience and the struggles they face just getting to Soldier Field on game day.

Last summer, the city of Chicago, in an effort to keep the Bears in town, hired Landmark to come up with a plan to reshape Soldier Field and connect it to One Central, a $3.8 billion development that remains in the planning stages after the pandemic. Landmark, an offshoot of The Hammes Company, is the developer for One Central and controls the 34-acre site that’s currently an empty railroad yard with the exception of a Metra commuter train station. 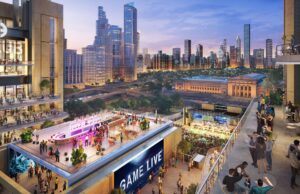 NORTHERN LIGHTS: A new club proposed for the north end of Soldier Field, shown here in a rendering. (Landmark)

Under the Hammes brand, Dunn and other principals at the firm served as an owner’s representative for building new stadiums for the Detroit Lions and Minnesota Vikings and the expansion of Lambeau Field that was completed in 2003.

Now, Dunn turns his attention to the NFL in Chicago, his biggest challenge, after working for years on One Central. Multiple architects have worked on the Soldier Field redesign. EwingCole has studied the complex is engineering issue of putting a domed roof enclosure on the stadium. Dunn would not disclose which firm(s) produced the renderings and the video. Gensler has done work on One Central, he said.

“There’s incredible potential,” Dunn said. “The idea of a dome is really a hybrid of Ford Field and U.S. Bank Stadium. The dome lives independent of the existing structure because you can’t build it on top of what sits there today, because it’s too heavy to support.”

By largely reconstructing Soldier Field for a second time, the Bears could potentially save up to $1.5 billion compared with building a new stadium from the ground up, according to Dunn. The key, he said, is restructuring the lease agreement between the Bears, the Chicago Park District, their landlord, and ASM Global, which runs the building. The Bears’ lease runs through the 2033 season.

In the Bears’ defense, the team has pushed over the past decade for more upgrades to Soldier Field, most notably building bunker suites, a standard feature at new NFL stadiums, but could never get city approval for the project. The new renderings, interestingly, show a field level club in one end zone, which indicates the city’s change in thinking as part of its last-ditch effort to keep their primary tenant. 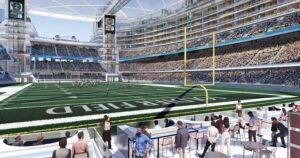 BEAR DOWN: Renderings of the reimagined Soldier Field include a field-level club in one end zone. (Landmark)

“There’s an overwhelmingly favorable economic opportunity for the team, should they choose to look at it,” Dunn said. “If not, there’s a compelling case that can be made without the Bears and we will explain that in time.”

Charles Johnson, a longtime consultant in Chicago whose company does market research and feasibility studies for sports and entertainment venues, is intimately familiar with the One Central development. Johnson Consulting was hired by Landmark to conduct market research and an economic impact study for the mixed-use project, which was completed a few years ago during the pandemic.

The firm is not currently engaged in One Central, but Johnson said it’s responding to a recent proposal issued by the state of Illinois for a feasibility study to determine the project’s fiscal impact before providing tax incentives as part of a potential public-private partnership.

“Landmark has an enormous lift, but the project is as bold as Hudson Yards in New York,” he said. “It’s re-doing transit and building over air rights on the commercial side. If they’re smart, they tie the two together and that becomes (similar to) the SoFi Stadium component. It could be quite compelling.”

Johnson is familiar with the Soldier Field saga as well. More than 25 years ago, he worked for the McCaskey family, the Bears’ owner, researching a new indoor NFL stadium that would have been connected to McCormick Place, the city’s convention center.

The renovation of the existing stadium killed any hopes for Chicago to host the Super Bowl and NCAA Final Four at an indoor stadium. To make matters worse, the renovations resulted in Soldier Field being stripped of its designation as a national historic landmark in 2006.

On the plus side, Dunn said the stadium’s loss of historic status removes some preservation obstacles for future improvements. There’s lots of real estate to be captured inside the footprint of the building that’s not currently used on game days, which is part of the opportunity, he said.

“The city has done nothing to try and keep the Bears and the mayor (Lori Lightfoot) is finally going to pay attention to it,” Johnson said. “The park district controls all the land along the lakefront. One of the challenges the Bears have had is trying to create a dynamic mixed-use development around Soldier Field proper and the only way they can do that is the way Landmark has proposed it.”