Coming off of a period of 36 events over 51 days, United Center continues the momentum into basketball and hockey season, opening a new FanDuel Sportsbook Lounge and introducing two grab-and-go markets powered by Amazon Just Walk Out technology.

The sportsbook, a two-story space on the south side of the Chicago arena’s atrium, features 1,300 square feet of LED screens and offers premium food and beverage in a sports bar setting. Levy runs the food at the sportsbook as part of its operation at United Center.

Currently, gambling is not permitted, as the venue awaits for approval from the Illinois Gaming Board. As it stands now, the lounge is open on game days only for event ticket holders, but is likely to open for the general public after the sportsbook is approved by the Illinois Gaming Board, said Joe Myhra, United Center’s senior vice president of operations and administration.

“It’s a great venue with great food and beverage offerings, great accessibility right off the concourse,” Myhra said. “We are hopeful we’ll have full retail gaming in the near future, and we are eagerly awaiting the outcome of the review.” It’s not clear when that process will take place. The building was constructed in what was previously office and suite space.

The space got a bit of a test run during the recent six-night Harry Styles “Harry’s House” residency (Oct. 8-15) at the venue. It became somewhat of a chaperone hangout for parents that may have needed a break from all the screaming kids in the crowd.

“We encouraged the adults bringing their children to the event to come as a kind of a parent lounge,” Myhra said. “It’s a way to explore and entertain that pulls in additional fans and events. We’re excited for the next step with our partner (FanDuel) and what the future may look like.”

Discussions between United Center and sportsbook operators began about two years ago after the state of Illinois approved sports betting. Myhra said FanDuel, which partnered with United Center for construction, design and installation, was the best fit. Project costs were not disclosed.

“We share our approach to customer service and the brands are aligned well,” Myhra said of the gaming company, which operates sportsbooks at Footprint Center in Phoenix and Audi Field in Washington, D.C., among others. “FanDuel is a leader in the digital space as well as the retail space and we were able to combine our efforts to come up with the installation we have today.”

Also new at the home of the NBA Bulls and Blackhawks are two Dashery markets powered by Amazon’s Just Walk Out frictionless platform. That makes three grab-and-go stands at the venue, after the first was installed shortly after the COVID shutdown and showed promising results. 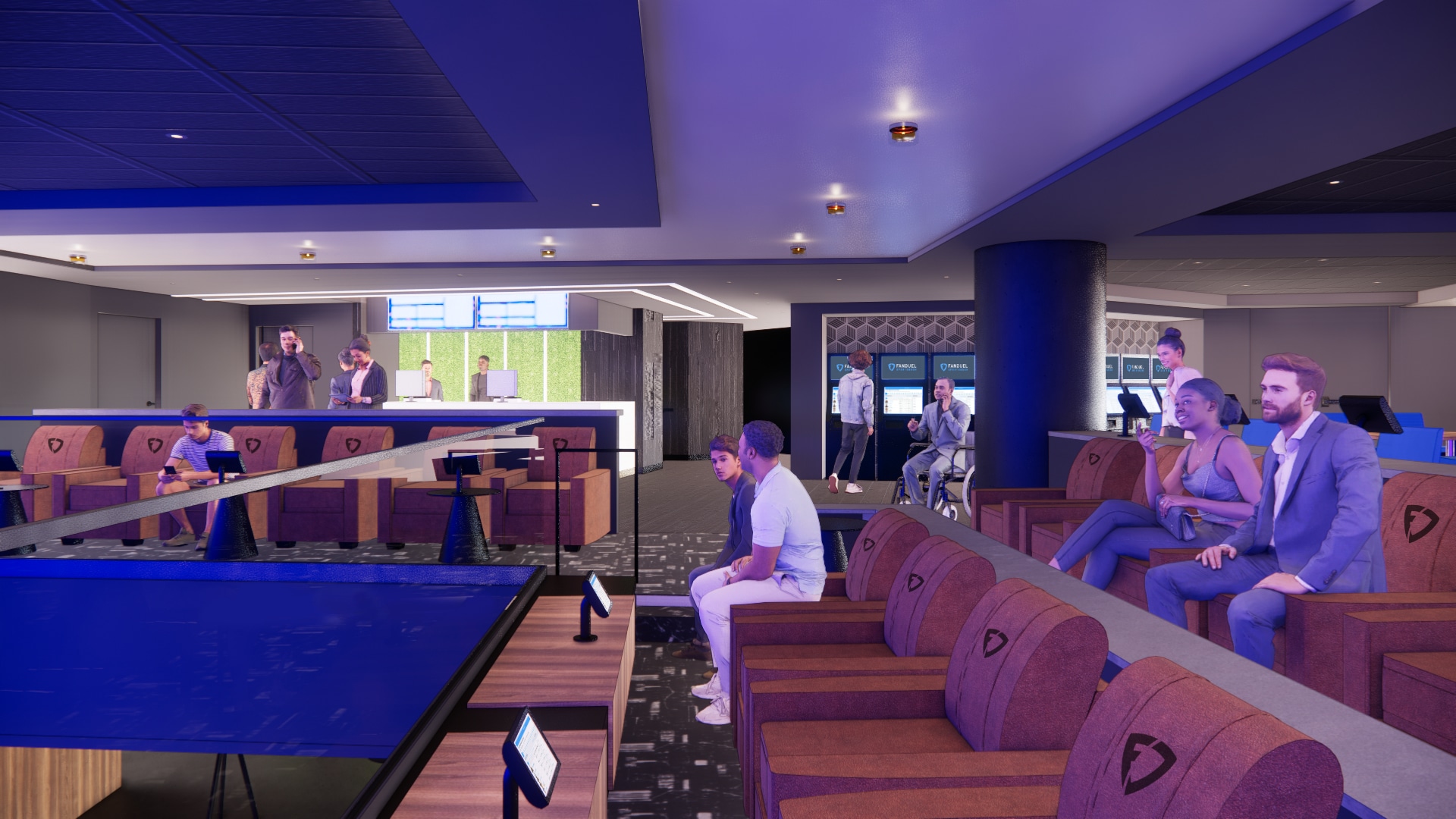 BETTER BELIEVE IT: A Rendering of the FanDuel Sportsbook Lounge that just opened at United Center. (Courtesy venue)

The markets offer ready-to-drink mixed cocktails and beer, with ID checked by staff, which are on hand to assist guests at the marketplaces.

“We learned a lot about the technology, the experience, the process, the operation and ultimately how fans respond to that,” said Myhra. “We had some great results and were encouraged by the next opportunity to move in that direction.”

Coming with the start of the Bulls and Blackhawks season was a busy period of concert events, with 22 concerts and special events over a period of  51 days from Sept. 10 to Oct 30. That period included two-night stands from Eric Clapton, Panic! At The Disco and Kevin Hart and single shows from Lizzo, Post Malone and, sandwiched between the Harry Styles dates, shows with The Who and Iron Maiden.

“All the stars lined up on that,” said Jerry Goldman, United Center’s vice president of booking, describing the six weeks as being able to “ski” between preseason Bulls and Blackhawks games. “It’s not every day you have the biggest pop act wanting to do six shows in your building, of only four cities. It was amazing to be selected as one of those.”

Goldman says the venue goes out of its way to take care of artists and promoters, and credits venue staff for pulling it off.

“We’re fortunate to be in what I consider a top three market,” Goldman said. “We have an amazing staff that takes care of the artist, from the box office to marketing department, activations, public facing, artist gifts backstage. We’re a promoter and artist-friendly building, and splash a little luck in there.”