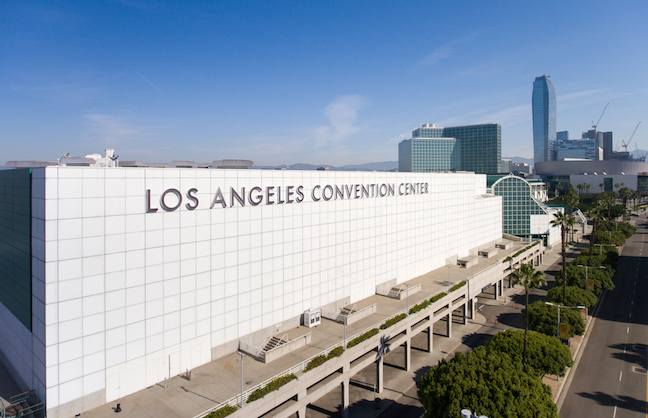 One hundred new antennas have been connected to bring 5G to the LA Convention Center. (Courtesy AEG)

5G is here. the long-heralded fifth generation of mobile connectivity, considered a breakthrough to move data faster and increase wireless speeds to transform services such as artificial intelligence, virtual reality and video calling, is set to replace 4G LTE as the world's premier mobile connector.

“5G will be transformative,” said Reed Peterson, head of Mobile World Congress Americas and GSMA, the trade body that represents the interests of mobile network operators worldwide. “It’ll pave the way for new technologies and opportunities we haven’t even imagined yet.”

Generally speaking, 5G will be 10 times faster than 4G, he said. The costs vary widely.
“It depends on the size of the area being hooked up to the 5G network,” said Peterson.

“5G will have significantly less delays and will transform the way we watch video, experience new media like AR and VR and open the door for more connected technologies in our everyday lives,” Peterson said.

The first convention center to move to 5G is the Los Angeles Convention Center, where 100 new antennas have been connected to enable 5G connections.

“3G was texting, 4G allowed us to do video and 5G will bring us speed and capacity,” said Doane Liu, executive director of the Los Angeles Department of Convention & Tourism. “Within a few years every new phone will be 5G capable and all the development apps will be working on 5G.”

The process to install the new antennas took “several months” and was “paid for by the mobile carriers,” said Liu.

“It was zero cost to the LACC or the city of Los Angeles,” Doane said. “The carriers will pay for it to be everywhere and they will up your bill to pay for it.”

While the LACC is pioneering the way, Doane firmly believes that “within a few years every convention center will have 5G and it will be on every pole and light post as well.”

“The reason we were fortunate enough to get the first 5G antennas was because we were hosting the Mobile World Congress Convention and the mobile carriers wanted to show off the new technology to the people who will bring it to the rest of the world,” he said.

For the moment the only ones who will enjoy the 5G at LACC are the attendees of the MWCA. “The general public won't be able to take advantage of 5G until the get new 5G-capable phones.”

The Mobile World Congress Convention, a three-day conference and exhibition convening the mobile ecosystem and its adjacent industries, was held Sept. 12-14.
There were 25,000 attendees.

“The LACC is taking a visionary approach in deploying its new 5G network, providing next-generation capabilities for exhibitors and attendees at Mobile World Congress Americas, and many other events, well into the future,” said Peterson.

Other convention centers are expected to take plunge soon. “There's three or four cities that are being looked at next but nothing's been determined yet,” said Liu.

Peterson said that intelligence gathered in a recent GSMA report — “The 5G Era in the U.S.” — revealed that that while 4G has been driving the transition from connected to digital consumers for years, 5G is the key to taking how we experience intelligent connectivity to the next level with smart cities, connected cars and remote surgeries as just a few examples.

“In fact, it’s been determined that 5G and 4G will likely coexist and complement each other for many years as 5G continues to roll out globally,” he said. “Consumers will notice first is how 5G will enable faster video with less latency.

“When it comes to the world of venues, 5G will provide opportunities to streamline and automate many maintenance related processes. For example, increased network connectivity can allow for buildings to install a remotely operated automated system that’ll control ventilation and air conditioning, lighting and other systems through a management system — from anywhere in the world via 5G powered sensors,” said Peterson

It’s also clear that venue events, such as concerts or sports, inspire social media interactions, with everyone posting photos and videos, using data to text friends and up-till-now have been faltering to provide all that bandwith, he said.

“5G will give people a better venue experience by simply having more network to work with, in real time, creating more opportunities for mobile interactions with low latency and no lag time,” said Peterson.

Having 5G in venues will also allow for a higher quality of broadcast to people at home.

“Take a hockey game, for example. 5G could allow broadcasters the chance to film the game in VR, allowing those at home the chance to strap on a headset and experience the game live as if they were in the rink,” explained Peterson.

Peterson pointed to the recent GSMA partnerships with AT&T and Time Warner, Verizon and Oath as proof of 5G's appeal and potential.

“We’re on the path toward creating a new digital entertainment ecosystem, and 5G will be a major part of that, especially as the mobile screen moves from being the third to the primary screen people use to consume media,” he said.

Peterson believes that 5G is the key to advancing the connected future.

“The advent of 5G is coinciding with a major period of transition within the technology industry, where industries such as telecoms and media, the internet of things and AI are moving toward mainstream adoption. 5G has the potential to connect the dots and take us into the future — today,” Peterson added.