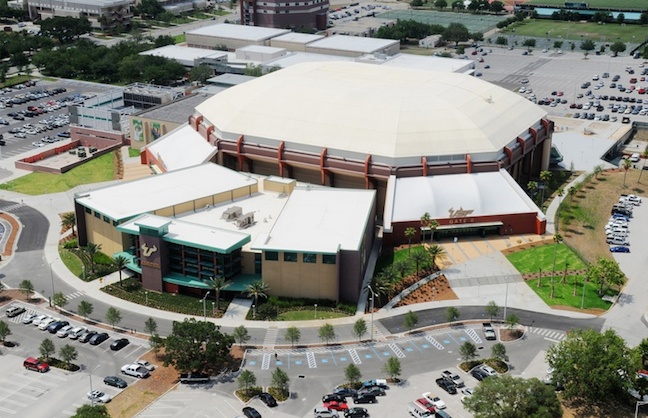 The management at USF Sun Dome, Tampa, Fla., is changing. Spectra, which has been managing the property for the last five years, is out, as of June 30 and Tampa Bay Entertainment Properties (TBEP), an offshoot of Tampa Bay Sports and Entertainment (TBSE), is taking over July 1. TBSE is the entity that runs neighboring Amalie Arena.

It’s a five-year deal between USF Sun Dome and TBEP. Rhett Blewett, who has been a member of TBEP for the past 10 years has been tapped to oversee building and event operations at USF Sun Dome.

“Since Mr. Vinik bought the team (Tampa Bay Lightning) in 2010, the brand re-creation of the Lightning and Amalie Arena, led by Mr. Vinik and our CEO Steve Griggs, has been phenomenal.”

“USF Sun Dome came to us and said that their management contract with their current vendors was expiring and asked us to take a look at it,” he said. “They were very interested in the transformation of our organization and our brand and wanted to see if we would be interested in helping them make the same transition.”

“Spectra is very proud of the business that we have built at the USF Sun Dome over the last five years,” said Trent Merritt, GM, USF Sun Dome. “Following the 2011/2012 renovation, we undertook a highly successful rebranding campaign and subsequently took the venue to a nationally ranked Top 5 University arena and a Top 2 ranked arena in the state of Florida each year, with respect to bookings.”

“In doing so, we also exceeded the arena’s financial goals each and every year by a significant margin,” he said. “While we are disappointed in the decision to change management companies, we wish the best for the Sun Dome moving forward.”

USF Sun Dome is a 55,000-sq.-ft., multipurpose facility on the campus of the University of South Florida. The building is approximately 37 years old and it is located on the southeastern side of the USF campus; it is home to the men's and women's basketball and volleyball teams.