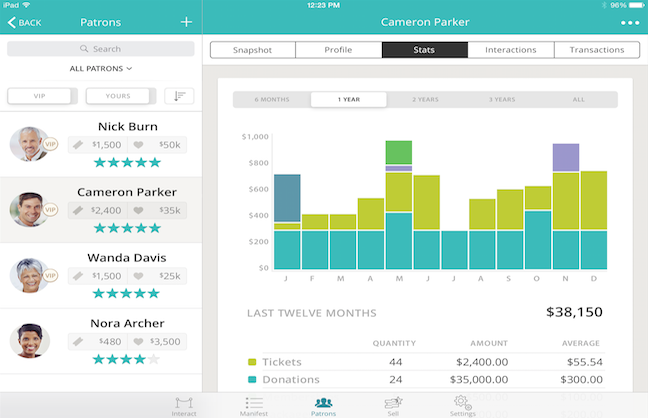 In an age when technology has rewritten the definition of nostalgia as yesterday’s news, San Francisco-based ticketing solution provider Vendini has taken an even more “now” approach with the introduction of its Patron Connect app, designed with full real-time features in place that can be used for a variety of functions.

“A large portion of our business is in the nonprofit performing arts segment of the market,” said Mark Tacchi, a former Apple engineer who cut his teeth learning under Steve Jobs before founding Vendini in November 2001. “About 65 percent of our business is in that market. We believed there was a need to create something to address this year-end and donation aspect of the business. Patron Connect does exactly that.”

Patron Connect is a newly released mobile app that currently runs on an iPad while the next virtual app will expand to iPhones and Android devices. In short, Patron Connect helps venues engage, manage and cultivate their patrons.

“It is your day-of-show personal assistant for keeping track of your VIPs,” Tacchi said. “In the nonprofit world you are tracking your top donors and trying to move people along all the time from a single-ticketbuyer to a first-time donor, etc., to get them along the chain so they become a major contributor to the organization.

“This app helps you track those patrons. At a glance you can see who is showing up at the performance tonight. You can assign tasks and patrons to specific employees at your organization. These nonprofits will have a group of people that work for them … sometimes it’s one person or sometimes larger organizations will have several people working on the development side, which is fundraising. This app is for the development people at the organization, the people who raise the funds.”

“On the for-profit side, it might be for the CEO, the GM, the executive director or owner who wants to keep track of his VIPs. Those VIPs might be promoters, sponsors, colleagues or someone of status in the community. You can track that. You can make notes and set triggers and alerts in the system.”

Stephanie Phipps is development director for Thalian Hall, located in Wilmington, N.C., and one of the oldest theaters in the United States that has been in almost continuous use since opening in 1858. As a new user, she expects Patron Connect to make a significant difference at her venue because of all the details in one app.

“The level of information is more robust – and easier to gather and digest – than almost any other product I’ve come across,” Phipps said. “Using Patron Connect is just as easy as using your banking app on your phone.”

Last year Thalian Hall held more than 250 shows, events and film screenings for a total of 495 performances. These programs attracted audiences totaling more than 85,000 people, with events ranging from music to ballet and theatre, from pop, jazz, folk and country music to the finest in domestic, independent and foreign films.

The venue offers educational performances and programs attracting more than 10,000 students each season. It is one of the most heavily utilized facilities of its kind in the nation and is an economic generator stimulating the local economy by more than $2 million annually.

With a background including the American Heart Association and the MS Society where she has driven marketing and fundraising campaigns, Phipps understands the importance of business sustainability and how Patron Connect can make her life easier.

“This is a great starting point, and I can see so many opportunities to build out this app,” she said. “I know that Vendini is already working on their next iteration, but I would personally love to have a way to accept donations right on a mobile device. That would really allow you to immediately close the loop from a development standpoint. When you’re right in front of them, donation becomes top-of-mind, so it would be great to be able to take advantage of that in-person experience.”

Patron Connect also tracks any purchase or transaction by guests on the app and on the day-of-show displays in real-time tickets being purchased, an update that continues until the venue decides to close ticket sales for that particular event.

The ticket scanner app allows venues to know that exact moment when a VIP enters so action can be taken by the venue to assign a staff member to the VIP.

“I can say, ‘Be sure to bring Bob Smith over to the VIP area and get him a glass of champagne,” Tacchi said. “It gives you the ability to know who is showing up at the venue. That’s one of the key, critical things.

“Another is that you might be looking at that VIP’s profile on the app. You’ve got some really rich data there … what his spending patterns are, how much he donated to the nonprofit, how much he sponsored, what tickets he has purchased in the past, what kinds of things he’s got upcoming … and you can edit those things right there in the app. It also records interaction. You can see all the interaction you had or will have with that VIP.”

To meet the demand of its 2,200 members that represent close to 3,000 venues, including 350 universities and festivals among others, Vendini has 125 full-time employees with several engineers working on specific tasks and apps for the venue world. As the company website says, Patron Connect helps cultivate patrons, heighten loyalty, increase efficiency and track and analyze.

“The company is Vendini,” Tacchi said. “When I started the business it wasn’t called Vendini Tickets or anything tickets. I wanted to create a platform that was more than just ticketing. I wanted to have the ability to create something that serviced live events across the board, and ticketing was the first element of that.”

As the business has grown, so has the range of offerings. Patron Connect happens to be the latest, and Phipps believes one of its strengths for her venue lies in the marketing benefit.

“The app is more of a singular, one-on-one marketing tool,” she said. “Rather than making broad marketing decisions based on the app, Patron Connect allows us to provide very custom service to individual patrons. But it still ties into marketing aspects that we deal with every day, specifically with reviews. Everyone knows a bad review can seriously cost you.

“At the same time, when you keep your patrons happy, especially patrons who are influencers, they become a powerful marketing tool for you. They tell friends, family and, before you know it, that rock-star patron has brought you 10, 15, even 20 new fans. Word of mouth is a very powerful thing, and forming great relationships with your patrons is the first step toward those positive word-of-mouth reviews.”