‘We Are Here to Fulfill His Dream and Vision’ 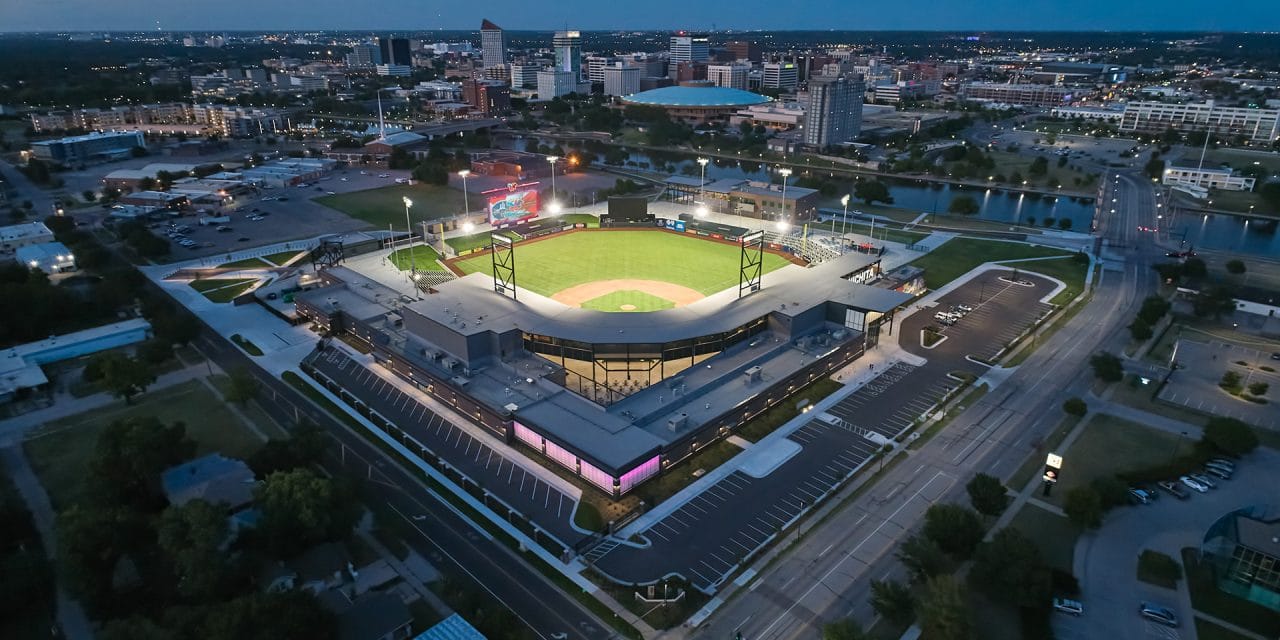 Jared Forma still gets emotional when talking about his late boss Lou Schwechheimer. Schwechheimer, the 62-year-old baseball lifer and co-owner of the Wichita Wind Surge, died in July of complications from COVID-19 after developing a new minor league ballpark in the city.

Riverfront Stadium, a $75 million facility, was set to open in 2020 until the pandemic forced the cancellation of the Minor League Baseball season. Sadly, Schwechheimer never got to see the 10,025-capacity park filled with fans cheering the home team on a summer night along the Arkansas River. 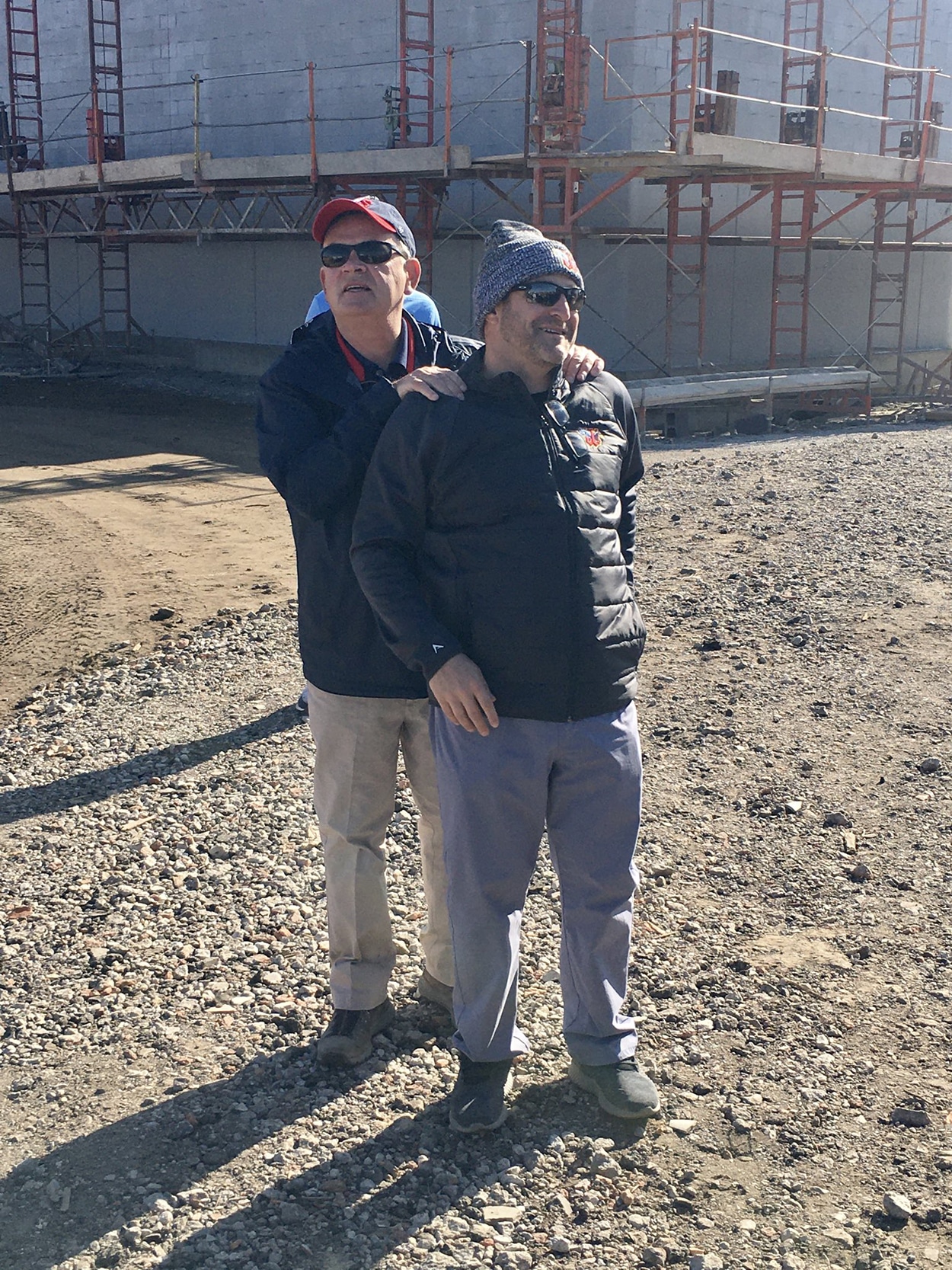 Lou Schwechheimer (left) and Jared Forma on site during the construction of Riverfront Stadium in Wichita, Kansas. (Courtesy Jared Forma)

“I’ll forever be grateful for working for him,” said Forma, general manager of the Wind Surge, the Minnesota Twins’ Class AA affiliate. “I learned so much from him. He reemphasized every day — our businesses are so simple, no matter what we’re doing. Lou treated everyone amazingly, whether it was a part-time hourly worker or the CEO of a Fortune 500 company.

“Everyone just loved him.”

On May 11, about 10 months after Schwechheimer’s death, Riverfront Stadium will open its doors for Wind Surge baseball with capacity restricted because of the pandemic. The first home game is against the Amarillo (Texas) Sod Poodles.

Wichita is now tied to the Twins as part of Major League Baseball’s reorganization of the minors announced earlier this year. The Wind Surge had previously been the Miami Marlins’ Triple-A club.

Team officials plan to pay tribute to Schwechheimer that night, and a bigger celebration of his life will be held later in the season at the ballpark after the pandemic has subsided and more people can gather for the moment.

The story behind Schwechheimer and the ballpark project in Wichita is an intriguing one.

His journey started in Pawtucket, Rhode Island, where he spent 37 years working for the Boston Red Sox’s Triple-A team. Schwechheimer started as an intern in 1979 and eventually became part owner of the club.

In 2015, he left Pawtucket and bought minor league teams in Port Charlotte, Florida, and New Orleans. Schwechheimer’s initial intent was to relocate the New Orleans Baby Cakes to Havana, Cuba.

It would have been the first Minor League Baseball team in Cuba since the old Havana Sugar Kings, a Cincinnati Reds affiliate and a member of the International League from 1954 to ’60. The political divide between the United States and Cuba after Fidel Castro took over the Caribbean nation resulted in the Sugar Kings moving to Jersey City, New Jersey, for the 1960 season.

Some might think Schwechheimer was crazy for trying to resurrect minor league baseball in Cuba.

Five to six years ago, it looked like it was going to happen, said Jordan Kobritz, a co-owner of the Wind Surge and the team’s CEO. Kobritz, a past owner of two minor league baseball teams in Maine and Florida, knew Schwechheimer for 40 years.

In 2015, under President Barack Obama’s leadership, the United States restored diplomatic relations with Cuba. In 2016, Obama attended an exhibition game in Havana between the Tampa Bay Rays and the Cuban national team. The moves opened the door for American tourism to resume in that country for the first time in more than 50 years and provided an opportunity for an entrepreneur such as Schwechheimer to put a minor league team in Havana.

CBI Partners, a group that included Schwechheimer and Kobritz, had recently acquired the Charlotte (Florida) Stone Crabs, a Class A team, followed by the Triple-A New Orleans franchise.

The Stone Crabs stayed put in Port Charlotte as a Tampa Bay Rays affiliate. Kobritz joined the ownership group after Schwechheimer asked him to become a partner on the venture in Cuba.

“It was something that Lou had just dreamed up one day and started working on it,” Kobritz said. “He was always a visionary. That was the goal; that’s why we all got together. We bought that team to take it to Havana.”

That all changed in 2017 after President Donald Trump reimposed restrictions on business and travel with Cuba, effectively shutting the door on Schwechheimer’s dream.

“When the political winds changed, we were sitting in New Orleans with a Triple-A team in a city that was not a baseball market,” he said. “As they say, one door closes and another door opens. We got a call from some folks in Wichita asking us if we were interested in relocating. They wanted a baseball team.”

Over the past 50 years, a few minor league baseball teams have come and gone in Wichita. The one constant was the National Baseball Congress World Series, providing a strong grassroots connection to the sport. First established in 1935, the annual event brings 800 college and amateur players to Wichita every August to compete over two weeks in a double-elimination format. (The 2021 NBC World Series will take place at Riverfront Stadium.)

For many years, the tournament was held at old Lawrence-Dumont Stadium, named in part for Raymond “Hap” Dumont, founder of the NBC. The old ballpark fell into disrepair, though, and the event moved to Wichita State University’s Eck Stadium.

On their own, the Wichita State Shockers historically have had a strong college baseball program, making seven appearances in the College World Series since 1982. Overall, the school has produced about three dozen major leaguers, including present head coach Eric Wedge.

Apart from amateur baseball, the city’s vision was to secure a minor league team and build a new facility to help revitalize downtown. Schwechheimer and his partners did their research, visited the city and found that its leaders were doing some great things to drive economic development.

The site itself, where Lawrence-Dumont Stadium sat, was “absolutely gorgeous,” Kobritz said.

Kobritz, an attorney by trade, negotiated multiple agreements as part of the Wichita deal. The initial timeline was tight. The group had 15 months to complete the project from start to finish. J.E. Dunn Construction led the design-build format with sports architect DLR Group.

Tom Tingle, a senior associate with DLR Group, was on the front end of the Wichita project as the firm’s client leader in business development. Tingle knew Schwechheimer dating to the late 1980s when Tingle worked for the old HOK Sport.

Years ago, Tingle completed a master plan for renovating McKoy Stadium in Pawtucket. HOK Sport didn’t win the job for designing the actual ballpark upgrades, but Tingle stayed in touch with Schwechheimer. They would see each other at baseball’s winter meetings every year and take time to visit.

“Lou was very wise; unflappable, calm and easygoing,” Tingle said. “He took everything in and when he spoke, he had a true message (to convey). He was overshadowed a little bit by the other owners when they were running the PawSox. In Wichita, I saw him in a different light. He had strong leadership and good mentoring of his staff.”

Forma concurs with Tingle’s assessment. Forma was already in southwest Florida working for Ripken Baseball when Schwechheimer’s group acquired the Stone Crabs, and he thought he would be fired after the team was sold, which typically happens when new ownership takes over.

This time, it was different. Schwechheimer asked Forma if he wanted to stay on board and work for the Wichita team and the new stadium development.

“I don’t know why, but as Lou would tell you, I grew on him like a fungus,” Forma said.

“We had a very special relationship,” he said. “I’m from New Jersey originally and can be quite loud, which would drive him nuts. We worked out of construction trailers as the new ballpark was built and he had the unfortunate experience of being right next to me.”

When asked what he learned from Schwechheimer about facility development, Forma said, jokingly: “Keep him out of it. Anytime you let Lou into the conversation, you’d have another idea. We had to explain to him that we poured the concrete already and it was kind of hard to move.”

When COVID-19 hit in March last year, one month from Opening Day, most of the Wind Surge staff worked from home and it was just Schwechheimer and Forma working in adjacent trailers for two months at the construction site, spaced safely apart. They kept the doors open to both trailers to communicate during working hours.

Sometime in early July, Schwechheimer got sick and quarantined at home. He thought it was just a cold but told everybody around him to get tested for the coronavirus. Schwechheimer eventually was hospitalized. He took a turn for the worse and died July 29.

“The first or second night in the hospital, he called me, yelling about something work-related,” Forma said. “I told him, ‘Don’t worry, we got this. Take care of yourself.’ I bought him an iPad to download movies. Entering his last week, he called me and couldn’t figure out how to use it. I think he used it one night.”

“I miss him dearly,” he said. “We are here to fulfill his dream and vision, and that’s our mission.”

As the 2021 minor league season approaches, Kobritz has mixed emotions, knowing Schwechheimer won’t be there to share in the joy of a new ballpark and what it means for the city, as well as those employed with the Wind Surge.

“We try to remind ourselves that he walked that ballpark last year after it was completed and before he got sick, and that he could imagine a situation where it was full and people were having a good time,” Kobritz said. “He could probably see that better than the rest of us could.”