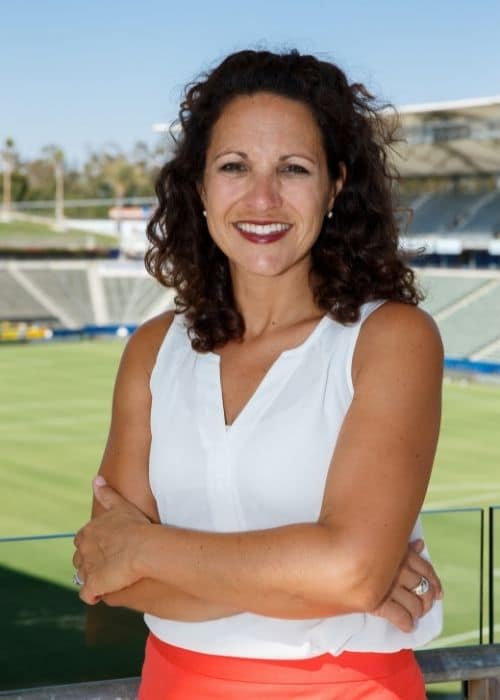 She’s been part of championship seasons, first-of-their-kind concerts and sporting events and led innovative initiatives at her company, but what Katie Pandolfo is most proud of this past year is different.

“The most impactful accomplishment this past year was joining forces with Dignity Health, our naming rights partner, to use our parking lots and stadium for a massive vaccination clinic serving 20,000 people over two weeks,” said Pandolfo, who joined Dignity Health Sports Park in 2004 as event manager and is now general manager. “This clinic highlights the importance of finding partners who share your same values and putting those values to work through initiatives that positively impact the communities we live and work in.”

That’s not to dwell on the pandemic, however.

“In mid-July we hosted our first full capacity event, which was an amazing feeling after a fan-less or socially-distant 18 months,” she added. “There is nothing that compares to a full stadium of screaming fans.”

That momentum is continuing to the workforce as well, she says.
“(It) was a tough year for staffing at every level, but I’ve already seen signs that 2022 will be much better and people are eager to head back to work,” Pandolfo said.

Dignity Health Sports Park is home to Major League Soccer’s LA Galaxy, which has seen three MLS cup victories during Pandolfo’s tenure. Her accomplishments in various roles at the stadium include overseeing production of the complex’s first-ever boxing match featuring Oscar de la Hoya in front of a sold-out audience of 27,000. She also has spearheaded efforts to increase public transportation at the stadium, and has developed an industry-first work-life-balance wellness program that includes onsite fitness classes.
“I am extremely fortunate to be located in Los Angeles, which happens to be home to a number of major events over the next six years,” she said. “The World Cup in 2026 and the Olympics in 2028 are at the top of my list — but I’m also excited to be a part of the LA Galaxy winning their sixth MLS Championship this season!” — Ryan Borba