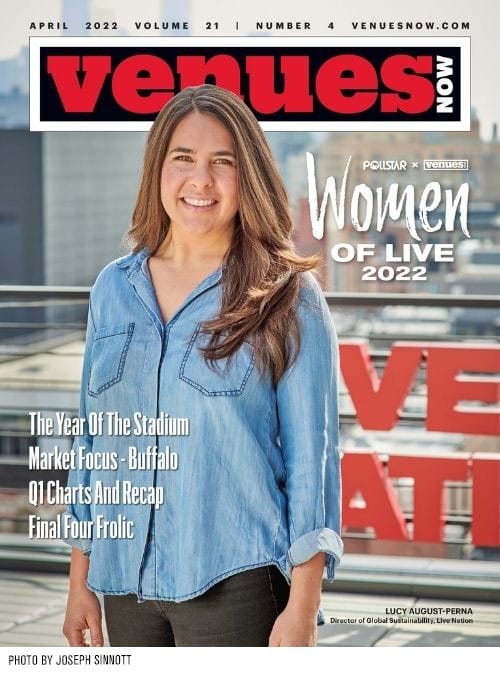 Sustainability is easy to understand: Don’t use more resources to meet your needs than future generations need to meet theirs.

But the concept of protecting and preserving the world’s climate and environment is much harder to put into practice. It requires a tenacious environmental advocate like Lucy August-Perna, director of global sustainability at Live Nation.

“As the leader in live entertainment, what we do will inevitably have an impact on the rest of the industry and has the potential to have an impact on society more broadly given our reach and the millions of fans we bring together at our events each year,” she said. “I’m excited to take our platform and what we’ve learned to help further inform the ways we can all take action on climate and
the environment.”

Creating a mind shift through education and implementing meaningful processes for diverting waste from landfills takes persistence and patience. August-Perna views it as a challenge worth taking.

The initiative was more than trash talk with the primary targets of reducing greenhouse gas emissions by 50 percent by 2030 and eliminating single-use plastics at all owned and operated venues and festivals. It was an ambitious undertaking before the onset of COVID. Live Nation owns 300 global venues, and stages 40,000 shows and 100+ festivals in a typical year. 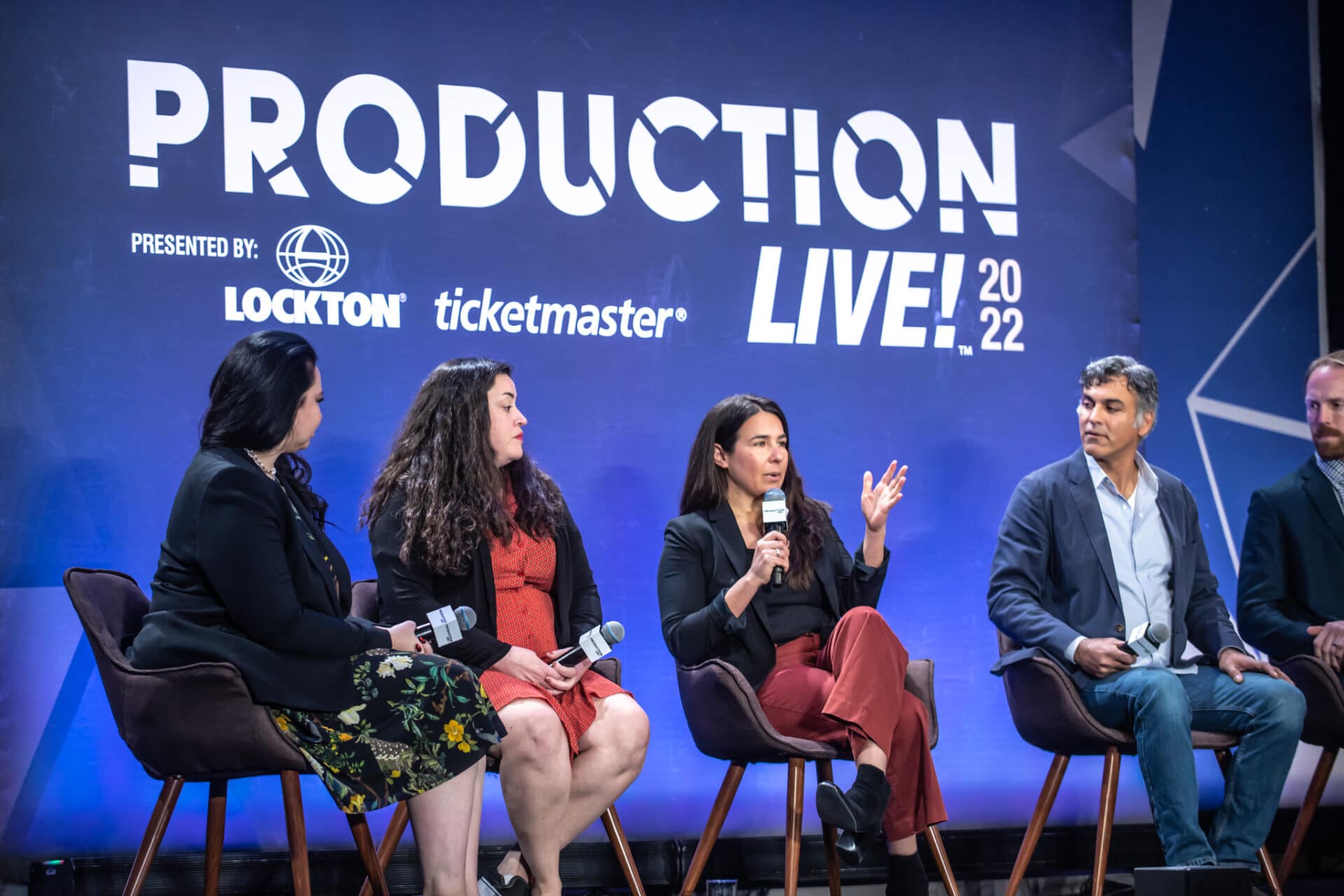 Go Green: Lucy August-Perna takes the mic during a Pollstar Live! panel discussion, “The Future Of Live Events is Clean and Green,” in February 2022.

The company’s position was to reduce the negative environmental impact associated with live events including waste disposal, recycling, energy and water consumption, as well as transportation and food sourcing.

One person can make a difference and now all Live Nation amphitheaters have sustainability coordinators who receive training and support from August-Perna to facilitate green initiatives. Live Nation also has sustainability leads who oversee Green Nation for EMEA (Europe, the Middle East and Africa) and UK/Ireland and work with cross-function teams in other regions including Latin America and Asia to help align and share best practices to maximize impact.

In Beson’s region, using reusable cups removed 15,000 single-use cups from the landfill. At Coastal Credit Union Music Park at Walnut Creek in Raleigh, North Carolina, the staff tend a garden and raise chickens, named Reba, Chick Jagger, and Show Call, to provide fresh eggs for visiting performers. Education and creating actionable ideas was critical to getting buy-in from the staff at each venue. 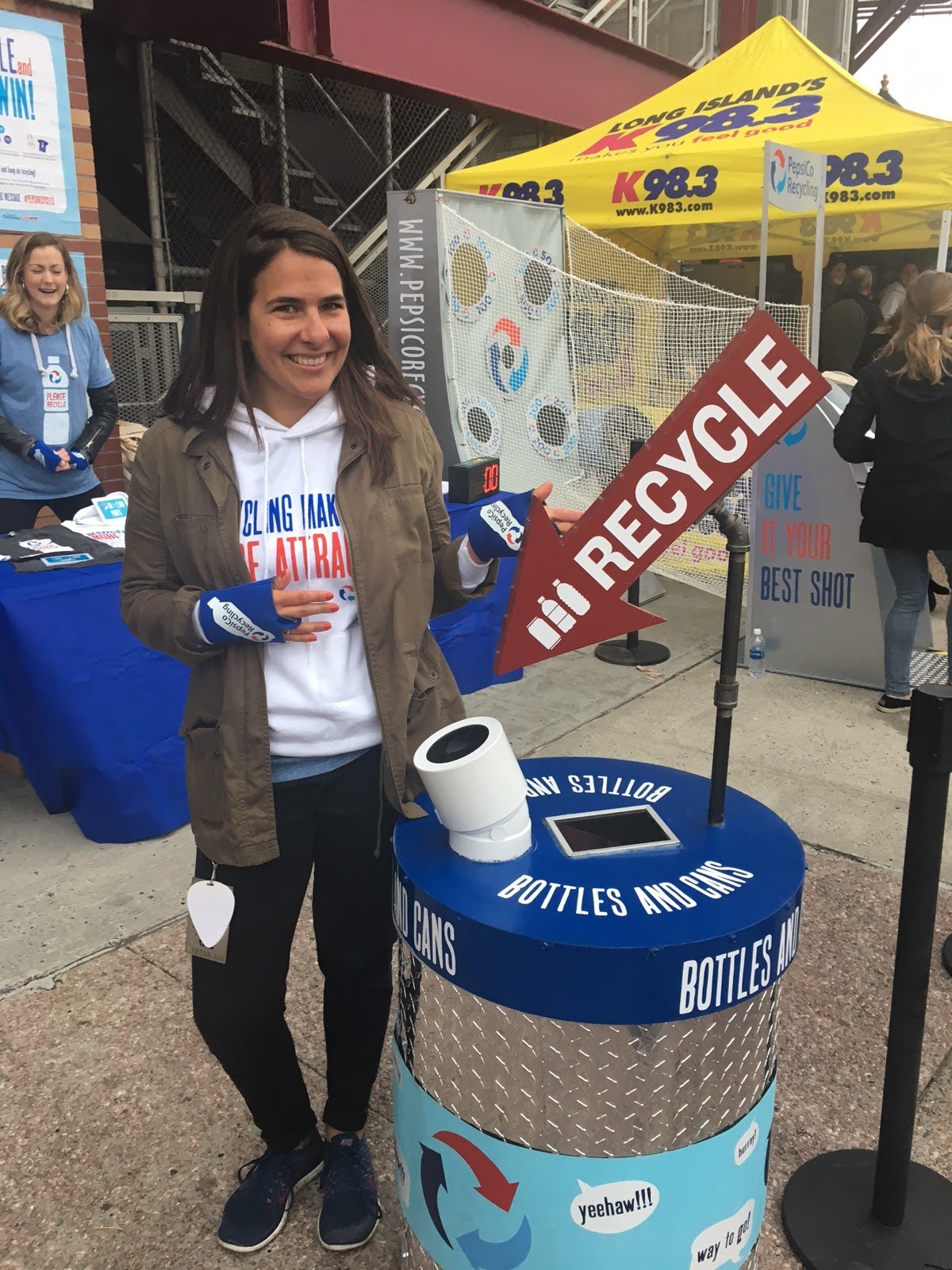 Feeling Blue: Lucy August-Perna does her part at Northwell Health at Jones Beach Theater. With August-Perna as global sustainability director, all Live Nation amphitheaters have sustainability coordinators who receive training and support to facilitate green initiatives.

“They were fearful of the unknown,” Beson said. “Some staff members had no idea about composting or recycling and now they have bins at home to separate waste. If you learn it, you use it, and Lucy was key in communicating why it is important.”

It is a mission embraced by more than the world’s largest concert producer. A Live Nation survey found the No. 1 issue for live music goers was the environment, and specifically plastic pollution. Eighty-six percent of the participants said they have reduced their usage of single-use paper and plastic products and 84 percent said that ending the sale of single-use products at live music events was an “urgent priority.”

An urgent need doesn’t mean there are immediate answers. Creating education platforms for employees and customers, finding local and national vendors to provide clean products and services, and convincing stakeholders that the investment in sustainability fosters brand loyalty and future business took time and tact.

August-Perna was the right person at the right time. With many restrictions lifted or relaxed and the industry amping up for a busy spring and summer touring season, August-Perna cites getting the Green Nation Touring program up and running as her most impactful accomplishment of the past year.

The program strives to get touring to a low-carbon future. Green Nation Touring combines climate science with workable solutions by providing resources to help guide the decisions made for every stage of a tour and generate discussion about how things can be done differently.

According to August-Perna, Green Nation Touring is developing a set of tools designed to help artists cut their emissions and invest in critical climate solutions over the next decade. The program is designed to help artists measure and understand their carbon footprint and provide ideas for reducing negative environmental impact. The tools will be coupled with actionable resources for each aspect of the tour from planning and booking, to production, venue offerings, and more.

“There has been so much excitement from the industry and from the artists we work with on sustainability,” said August-Perna. “It felt really important to take our own ambitions and learnings from across our global venues and festivals and build out a program to support the artists we work with who are so eager to participate in climate action and use their platforms to spark change.

“We want to do everything we can to support those efforts and I think the touring program sets us up to do that in a more strategic and intentional way.”

Identifying and engaging with like-minded partners and vendors strengthens the cause and provides the necessary framework for success.

Some of the basic requirements include outfitting venues with composting bins and recycling containers, adding climate-friendly, plant-based menu items, finding vendors in each market capable of removing the sorted waste, and providing water stations for refillable water containers.

“That alone was monumental,” said Beson, who only sells water in compostable or aluminum containers.

Water partner Liquid Death specifically chose aluminum cans because, unlike plastic, they are infinitely recyclable. According to the company, of all aluminum produced, more than 75 percent is still in current use, whereas less than 10 percent of the world’s plastic has been recycled.

“Lucy’s eye is always on the bigger picture and the need to act together; never easy, but the hallmark of Lucy’s leadership is generosity, open-mindedness, and fun,” said Tickell. “It is these qualities with Lucy at the helm that make Green Nation one of the most ambitious sustainability programs in the music business.” 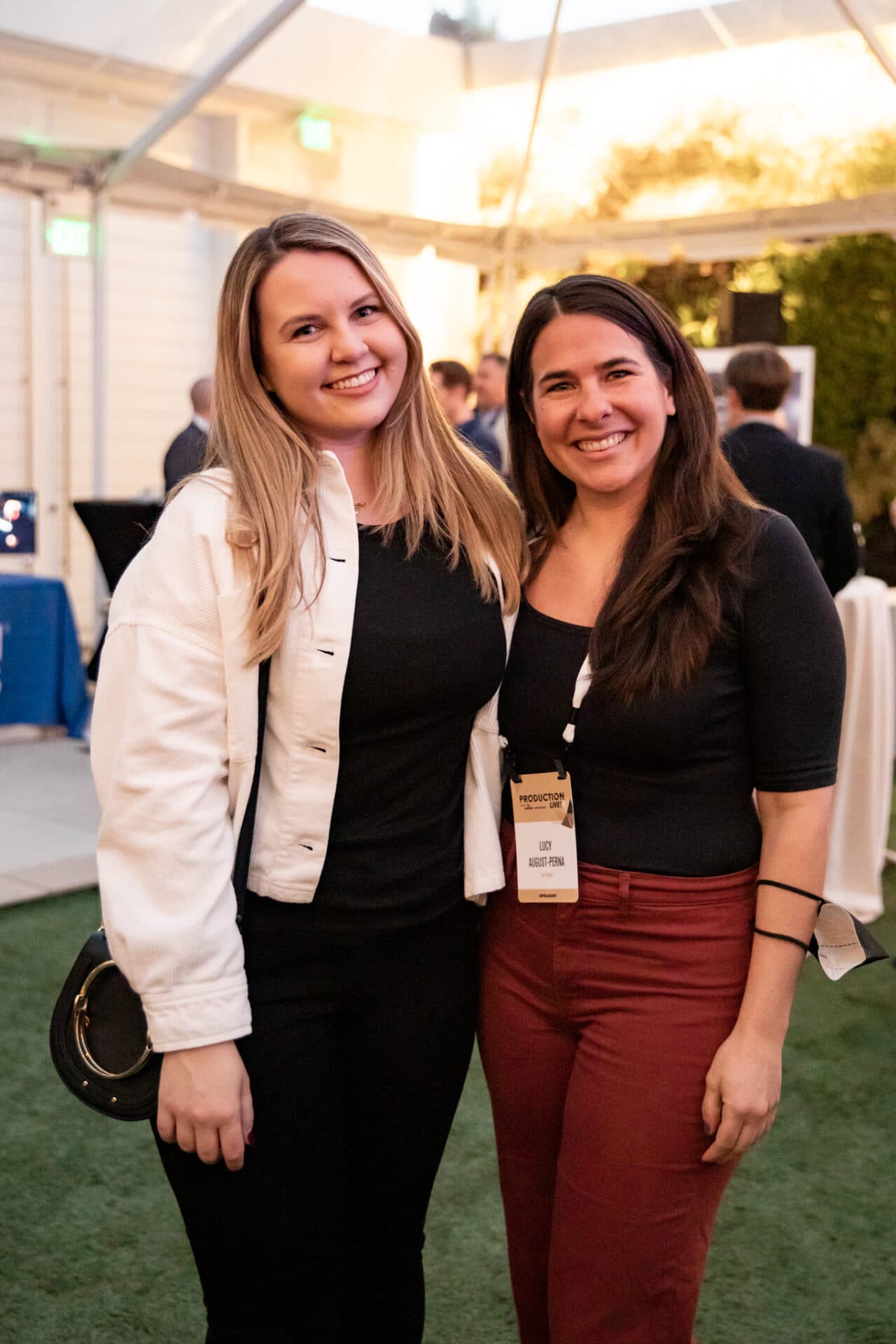 August-Perna, who says she is happiest in the ocean or the mountains, has an impressive track record of advancing sustainable initiatives at Live Nation, but she is constantly looking ahead.

“We’ve set some ambitious environmental goals at Live Nation including eliminating single-use plastics at our events, working toward zero waste concerts, and cutting our carbon footprint in half over the next decade,” she said. “Our teams around the world have already been working hard and making progress toward these goals – from C3 rolling out a reusable cup program across its festivals, which we anticipate will help reduce millions of single-use cups, to our venues in the UK switching to 100 percent renewable electricity, to the partnership with Liquid Death, which helped us avoid over 1.4 million single-use plastic water bottles across our U.S. venues in 2021.

“I couldn’t be more excited to build off this heading into what is going to be our biggest concert season yet,” she said. 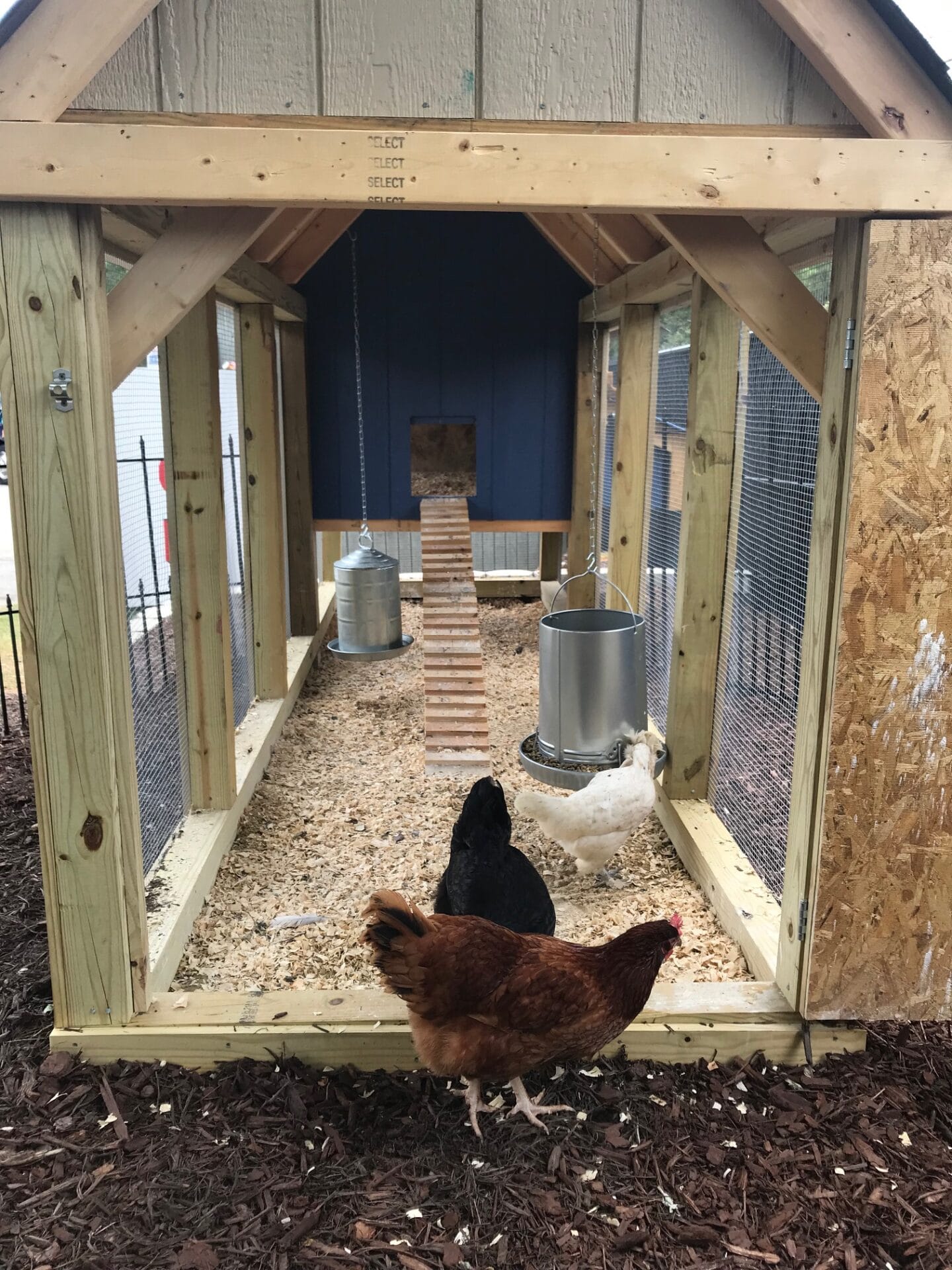 Prior to joining Live Nation, August-Perna was the social responsibility and advocacy manager for Specialized Bicycle Components, which advanced the cause of bicycle use over motorized vehicles.

She was the program manager for brands, music and sustainability at Effect Partners where she worked with national brands Clif Bar, Brita, and Glad and touring musicians including Dave Matthews Band and U2 to create best practices to enhance sustainability with concert tours. The effort included implementation of one of the first environmental riders, partnering with venues on the tour to develop sustainability programs, coordinating social impact work with non-profit partners.

August-Perna is as passionate about live music as she is about protecting finite resources and both interests had a recent convergence when Coldplay opened Climate Pledge Arena in Seattle.
“I’d been hearing from their team for months about these wristbands they pass out to fans at their concerts that light up,” said August-Perna. “Apparently, if you know you know. I finally got to witness it in person, and after nearly two years without a live show, the experience when those wristbands lit up for the first time during the opening song — it was emotionally overwhelming.

“To have the fans literally be a part of the show in that way, connecting people together in this emotional and visual experience was incredible and it felt very symbolic of the moment we’re in right now — both the return to live and bringing people together again and the recognition that climate change takes all of us participating in whatever way we can.” — Wendy Pearl