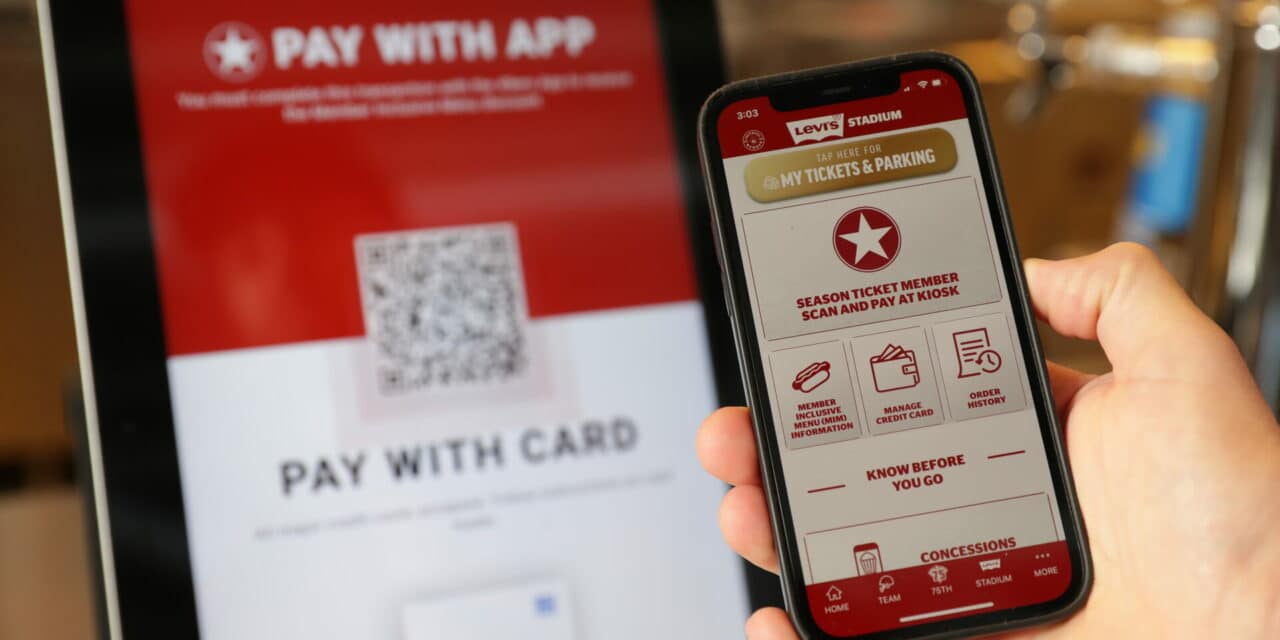 Per caps are up 44% over 2019 despite lower attendance

The San Francisco 49ers’ new all-inclusive concessions program has produced higher revenue than in 2019, when fans paid out of pocket for food and drink, according to data the team shared with VenuesNow.

After five regular season games at Levi’s Stadium, through this week’s Monday Night Football contest, concessions income is up with a 44% increase in per caps despite lower attendance, team officials said.

What’s driving that increase in sales is something the 49ers are still analyzing, considering the cost of 15 general concessions items such as hot dogs, chicken tenders, nachos and soft drinks is now folded into the ticket price for 50,000 season-ticket holders.

Under the Member Inclusive Menu, season-ticket holders are restricted to four items per transaction at concession stands. They’re charged for any additional items they choose to buy at one time.

Alcohol is not included in the all-inclusive program. Fans pay a separate fee for beer, wine and hard liquor.

“We’re still seeing the same level of purchases and transactions, even with fans essentially getting food items for free,” Javaid said. “Are there more alcohol purchases and higher-end purchases? We don’t have the answer yet, but fans are spending about the same amount of money they were before the program started.”

The program has gained traction as the season progresses.

With six weeks remaining in the regular season, the 49ers have seen twice the number of MIM orders since the program kicked off on Aug. 14, the date of the first preseason game at Levi’s Stadium.

The self-serve kiosk ordering system produced a season-high of 140 orders per point-of-sale unit for the Oct. 3 game against Seattle.

Overall, the 49ers are maintaining the same pace of concession orders as in 2019 but with greater fan satisfaction scores under the all-inclusive model, which is the most important factor, team officials said.

The 49ers, in conjunction with their concessionaire, Levy, launched the program this season after the pandemic delayed it in 2020. The state of California did not allow fans in the stands last season at sports venues.

Fans place their orders at the kiosks installed at concession stands. Member Inclusive Menu items are marked with a white star in a red circle on the kiosk screen. When finished with their order, fans tap the “Pay Now” button on the kiosk.

To complete the transaction and receive the discount, fans must open the app on their cell phone and scan the QR code that pops up on the kiosk, which takes the customer immediately to a checkout screen in the app for payment.

Apart from the kiosks, the 49ers set up seven concession lines to serve as express lanes for season-ticket holders. At those locations, fans only need to show their “virtual badge” displayed on the team app to verify membership in the program without having to order from kiosks.

For those lines, the best stand peaked at 164 orders per point-of-sale, which also occurred at the Seattle game.

Two express lines were added to the upper deck before the 49ers’ Nov. 7 home game against Arizona, producing an average of 149 orders per point-of-sale for the Monday night game against the Los Angeles Rams.

VenueNext, the technology firm that the 49ers co-founded seven years ago when their stadium opened, runs the point-of-sale network and is also the team’s mobile application provider.

The data indicates speed of service has improved through the kiosks. They’re producing transactions 20% to 30% faster over the average time at concession stands during the 2019 season, Javaid said.

Coming out of the pandemic, the 49ers anticipated supply chain issues and labor shortages, simply because of the amount of time and attention the team and Levy have spent on upgrading the concessions operation.

“Over the last two years, there have been a tremendous amount of challenges getting it up and running with permits and equipment,” Javaid said. “We invested millions in cooking equipment and signage and all of a sudden the pandemic hit. But because we were so invested in this program, we were looking at these things in March. We spent a little bit more money to make sure we didn’t have the supply chain and labor disruptions.”

Levy is busing concession workers from its accounts in Los Angeles, Sacramento and Reno to Santa Clara, a cost shared with the 49ers. They’re also providing bonuses for nonprofit groups as an incentive to work game days.

On the supply side, the 49ers and Levy found backup vendors to provide products should there be a breakdown in the process, which did occur with a hot dog supplier that couldn’t deliver in a timely manner, Javaid said.

“If we had not formed those relationships beforehand, we might not have had enough hot dogs, which would not have been a good thing when launching the concept,” he said. “As a country, that’s been one of the challenges. We’ve all become over-reliant on one producer.”

Starting with the Sept. 26 game against Green Bay, the 49ers started a “MIM-tern” program, hiring 25 recent college graduates and current students to support the all-inclusive effort. Those individuals are stationed at seven concession stands to help fans navigate the Member Inclusive Menu and reduce wait times.

Levy and the 49ers jointly share the expenses for paying those individuals.

The MIM-terns are armed with mobile ordering tablets. For the three most recent home games, MIM-terns have accounted for about 23% of all orders at those seven stands in which they have been used.

“Ultimately, they’re ‘line busting’ with handhelds,” Javaid said. “When lines get long, they can take your order and print out a receipt that you hand to the cashier and they get your food for you. That’s been a great piece of the success. They make a big difference.”

In one adjustment before this season, the 49ers made the decision to expand all-inclusive offerings in the club lounges to include higher-end fare beyond the 15 items available in general concessions.

The team and its food vendor felt confident that they had the proper amount of equipment to cover more items such as Tony Gemignani’s pizza and Guy Fieri’s Chicken Guy!, part of the menu in the United Club, according to Javaid.

In fall 2019, when the 49ers announced the all-inclusive concessions effort, team officials said season tickets would essentially go up in price about $20 for every seat per game to cover the cost of food and drink.

In reality, after sports was hit hard by the shutdown, pricing went up and down, in part after the 49ers evaluated the secondary market, given that the team had not raised ticket prices since Levi’s Stadium opened in 2014.

In the upper deck, some seats were reduced in price with the all-inclusive concessions model attached, Javaid said.

Other seats did go up in price.

“We felt those upper level end zone seats were too high priced,” he said. “We have seven years of data to see how fans sell tickets on the secondary market and which tickets they value more than others. It’s allowed us to reprice the building the way we wanted over the past few years.”

Senior Editor Don Muret has been a reporter for 35 years, including 25 years in trade journalism at SportsBusiness Journal and the old Amusement Business magazine before joining VenuesNow in December 2017. Previously, he worked 10 years as a sports writer for multiple daily and weekly newspapers. The Cedar Rapids, Iowa native has a journalism degree from Drake University and attended graduate school at the University of Iowa. He’s a diehard Chicago Cubs fan and loves live music. Muret lives in Charlotte with his wife, Dana, and their two teenage daughters, Madeline and Carolyn. Don can be reached at (704) 877-7399 or [email protected]