The Eastern Front and Center in Atlanta 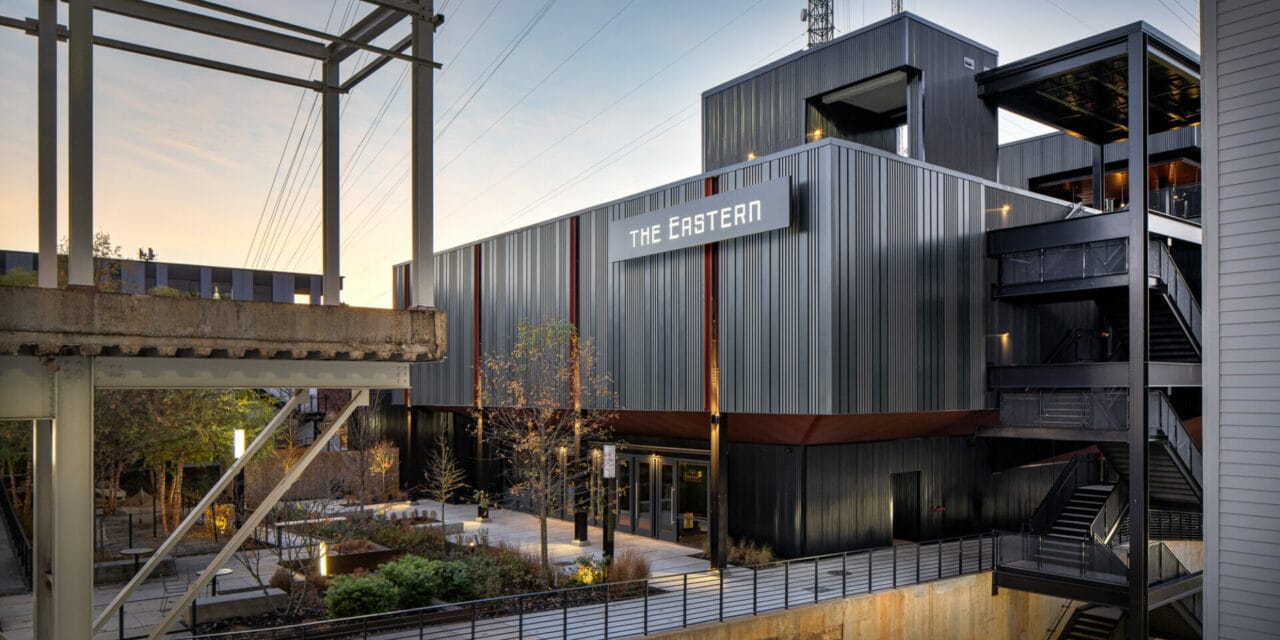 The Eastern, a new 2,300-capacity club designed by Perkins & Will, serves as an anchor for the redevelopment of a historic Atlanta neighborhood. (Courtesy Garey Gomez)

The new $17 million venue opened Sept. 1 as part of the revitalization of the Atlanta Dairies, a historic neighborhood that sits about two miles southeast of the city’s downtown district.

The Eastern is a joint venture between Zero Mile, a local promoter, and AEG Presents. Zero Mile also runs and books Terminal West and Variety Playhouse in Atlanta and the Georgia Theatre in Athens.

Atlanta’s newest club is part of an area that held a dairy co-op for 60-plus years before it eventually shut down due to a combination of financial woes and a spring 2008 tornado that caused a lot of destruction to the neighborhood, Atlanta Journal-Constitution reported.

But like many cities in the Southeast redeveloping older communities into entertainment districts, the Dairies has gone through a renaissance. Over the past six years, the neighborhood has seen new bars and restaurants open, catering to young professionals.

On its own, The Eastern, a piece of new construction, spans 37,000 square feet. The general admission venue features four levels above the floor and outdoor spaces to hang out as well.

Perkins & Will, an architect well versed in sports and entertainment facilities, designed the facility after it planned other projects as part of the adaptive re-use and urban renewal tied to the Atlanta Dairies.

The property was a brownfield site adjacent to a busy interstate highway. Project officials saw an opportunity to help complete a new urban courtyard setting that was part of the first phase of development, Walsh said.

Inside the club, the “fan shaped” floor plan effectively reduces viewing distance to the stage to provide better sightlines and the multiple levels maximize capacity in a relatively small footprint, she said.

Perkins & Will previously worked with Zero Mile on renovations to Variety Playhouse. It opened as a movie theater in 1940 and has been a club over the past 30 years.

The architect also looked to the promoter’s other venues for inspiration in designing The Eastern.

“We didn’t want the building to overwhelm its neighbors, so we used the sloping geography to our advantage,” Walsh said.

“By nestling the building into the landscape, we were able to create an intimate pedestrian space in the courtyard and still provide enough of a buffer to shield the development from Interstate 20,” she said.

The Eastern books a combination of jam bands, hip-hop, pop and and comedians such as Tig Notaro and RuPaul. AEG-owned Axs is the club’s ticketing provider.

Rick Mueller, president of North America for AEG Presents, declined to talk about the venue’s first 3.5 months of operation.

Bill Orner, Billy Strings’ manager, said he loves the new style of club represented by The Eastern, as well as the Mission Ballroom in Denver, Colorado and the Anthem in Washington, D.C. The band has played both of those venues, which opened over the past five years. 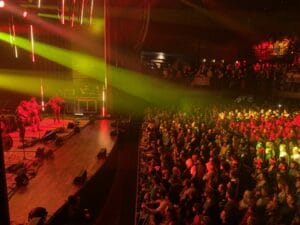 Billy Strings performs at The Eastern in Atlanta. (Don Muret/Staff)

The only thing lacking at The Eastern is a loading dock, but that’s typical of many 2,500-capacity venues, Orner said. The four dressing rooms and production office are a plus, he said.

“The only thing I would change is the catering is upstairs,” Orner said. “It’s still technically backstage but you have to take an elevator to get there.”

The Eastern appears to be an enjoyable fan experience in part due to its favorable sight lines, he said.

“I spend most of my time behind the curtain, but (the newer clubs) look bigger than they really are too, which is nice,” Orner said. “They’re paying attention to detail when it comes to everybody having a little space of their own.”

The Eastern’s rooftop bar at the top of the building, an outdoor space with roof cover, serves heavy appetizers such as hamburger sliders, chicken pot stickers and veggie spring rolls. Prices run $5 for fries to $14 for sliders. The outdoor bar is also the club’s designated smoking area.

Inside the venue, restrooms and smaller bars are laid out well to avoid bottlenecks with foot traffic.

Alcohol drink prices, $10 for 16-ounce beers and seltzers, are not outlandish compared with amphitheaters.

From looking at the crowd at the Billy Strings show on Dec. 11, it still pays off to get there early to be in the best position to view the show. In some spots, the upper levels were stacked five deep with standing patrons.

Looking ahead, Billy Strings continues to build momentum with a busy tour schedule and larger venues.

In 2019, the last time the band played in Atlanta, the group performed at Terminal West, capacity 625. Now, the quartet has moved on to facilities that are almost quadruple the size of that club, Orner said.

Some are midsize arenas such as ExploreAsheville.com Arena in North Carolina and Mohegan Sun Pocono in Wilkes-Barre, Pennsylvania.

Next up in an arena setting is a half-house show at Greensboro Coliseum, where capacity will be 6,800 in the lower bowl for the Feb. 11 concert, said Scott Johnson, the facility’s deputy director. The coliseum in North Carolina has 21,000 total seats.