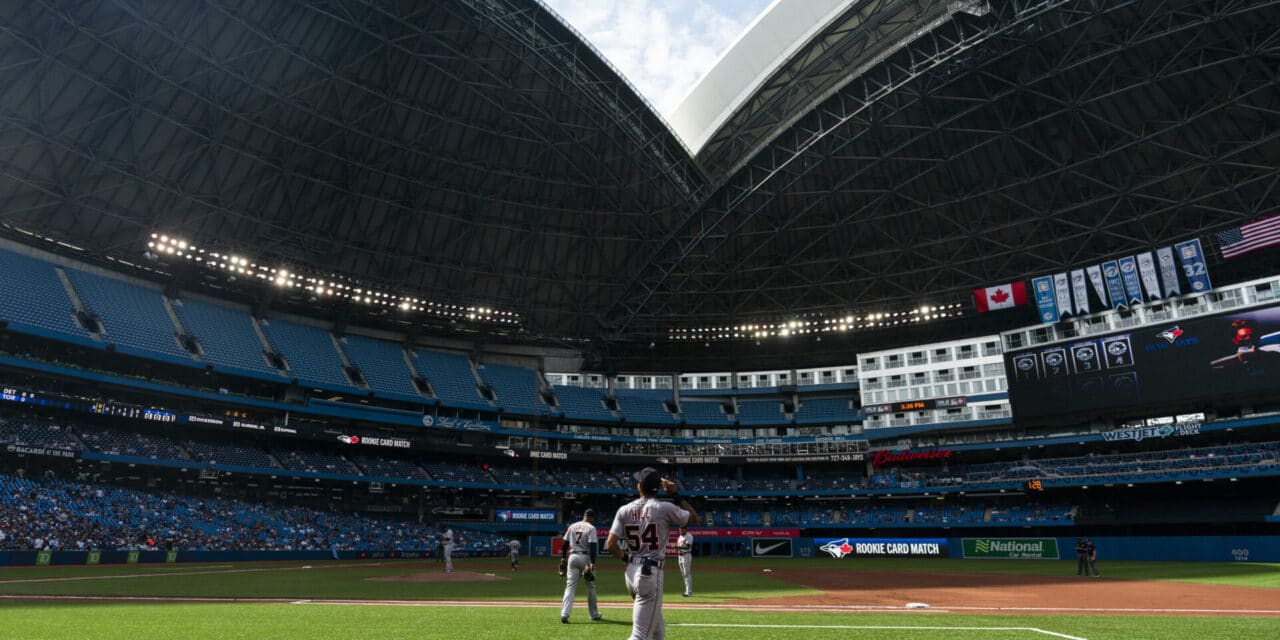 Rogers Centre, shown here on Aug. 21, 2021 for the Detroit Tigers-Toronto Blue Jays game, will be renovated at a cost of $200 million to $250 million, sources said. (Getty Images)

Populous to design renovations; PCL Construction is the builder

The Toronto Blue Jays have decided to renovate Rogers Centre instead of building a new stadium to replace it, according to industry sources familiar with the Major League Baseball team’s plan.

Populous, which designed renovations to the Blue Jays’ Florida spring training facility, will plan upgrades to the 32-year-old building, and PCI Construction is the general contractor.

Both firms won proposals issued by the team over the past few months.

The project cost is estimated at $200 million to $250 million (Canadian figures)  for an extensive makeover, sources said. There is no timeline for when construction would start.

Mario Coutinho, the Blue Jays’ vice president of stadium operations and security, did not return an email and phone call for comment.

Anuk Karunaratne, the team’s executive vice president of business operations and Sanj Perera, senior manager of project management, both principally involved in stadium renovations, did not return an email for comment.

The move represents a significant turnabout for the Blue Jays regarding the future of their venue, which stands as the first retractable-roof stadium in baseball when it opened in June 1989.

In November 2020, Rogers Communications, owner of the team and the facility, proposed that the stadium be torn down and replaced with a new building on site in downtown Toronto.

The new facility, proposed for the southern edge of the current property, was to serve as an anchor for redevelopment of Toronto’s central business district.

Brookfield Asset Management, an investment firm with $237 billion in real estate assets, was part of the redevelopment effort, several Canada media outlets reported at the time.

The decision to renovate over new construction most likely came down to sheer economics, sources said.

Globe Life Field, for example, a retractable-roof facility and home to the Texas Rangers, had a project cost of $1.2 billion. The stadium opened in 2020.

In Toronto, the Blue Jays love the current stadium location, plus, there’s really no room to build a new one elsewhere downtown, one source said.

“If they knock (Rogers Centre) down, it would take four to five years to rebuild,” the source said. “I’m sure they looked at all the options.”

In building a new stadium, the Blue Jays would be faced with the challenge of finding a temporary home during multiple years of construction, which ironically, they’re familiar with during the pandemic.

They played home games over most of the past two seasons at Sahlen Field, a triple-A ballpark in Buffalo, New York, and TD Ballpark in Dunedin, Florida, their spring training home and complex which underwent a $100 million renovation completed in 2020.

In late July, the Blue Jays returned to Rogers Centre to play home games for the final two months of the 2021 season.

The stadium has been improved over the years, including suite renovations completed in 2019 across the 300 level and behind home plate where the old press box was situated.

In addition, the retractable roof mechanism has been updated over the past decade in multiple phases, a critical piece of maintaining the stadium’s viability in a winter climate.

Structural engineer Walter P Moore was involved in the roof repair project. The roof now opens and closes in 20 minutes compared with 40 minutes to 45 minutes when the stadium originally opened.

In October, the Blue Jays announced they would install a new videoboard at Rogers Centre and make some concourse improvements for the 2022 season

More substantial upgrades would focus on making the multipurpose stadium more conducive to baseball, although the details are unknown at this point, sources said.

The Toronto Argonauts, a member of the Canadian Football League, played at the stadium from 1989 until 2016, when they moved to BMO Field, home of Major League Soccer’s Toronto FC.

The original cost to build what was initially called the Toronto SkyDome was about $600 million.

The roof itself accounted for 25% in construction expenses, sports architects said. The 11,000-ton structure was designed to be big and heavy to withstand snow loads in Canada.