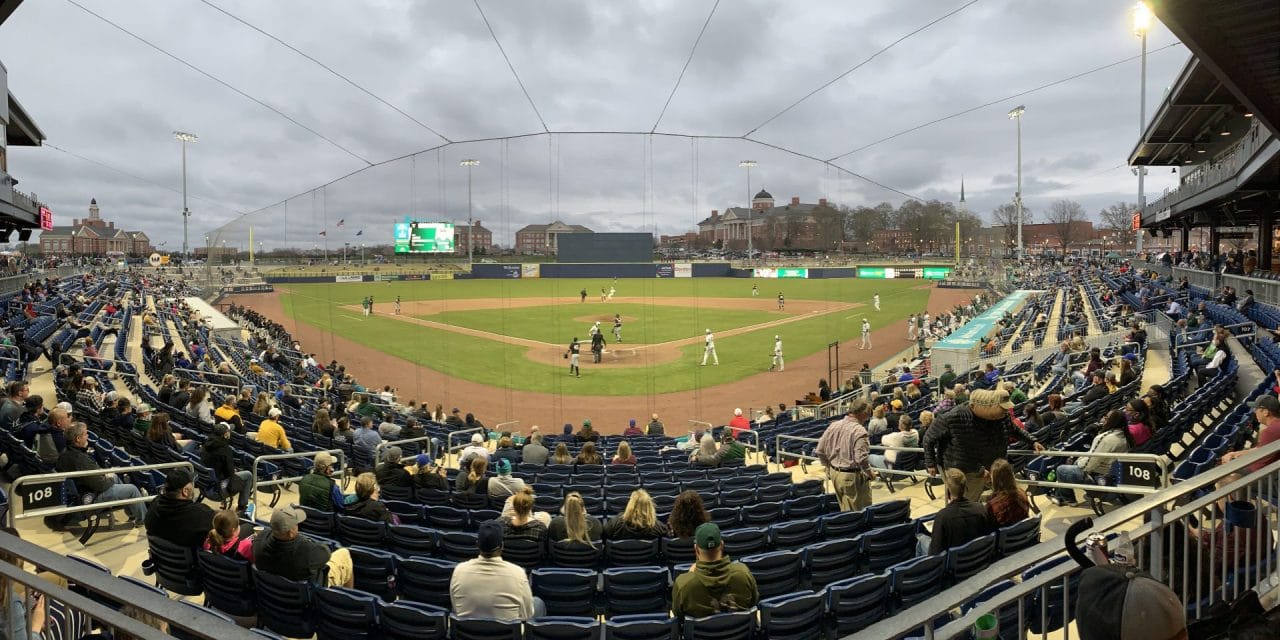 Team found way to make stadium part of city, even with opening delayed

KANNAPOLIS, N.C. — Atrium Health Ballpark finally opened for baseball this week, one year after the venue was poised to debut for the Kannapolis Cannon Ballers, the Chicago White Sox’s low-Class A affiliate.

The pandemic put the brakes on Minor League Baseball and the 2020 season was canceled. No ribbon cutting.

Capacity was restricted to 30% for Tuesday’s college baseball game between Charlotte and Appalachian State,  the first on-field event since the 4,930-seat ballpark was completed last year in Kannapolis, about 25 miles northeast of uptown Charlotte.

It was perfect for a soft opening before the Cannon Ballers’ first regular-season home game May 4.

For some in attendance, it was already a familiar sight, thanks to the Cannon Ballers and the city of Kannapolis, which funded the $52 million facility, doing a really smart thing two months after the pandemic began.

Starting in May 2020, they promoted the facility as a public park, given the new safety protocols. They opened the concourse and a main concession stand seven days a week for people to get some exercise and grab a bite to eat for lunch and sit in the seating bowl.

In addition, the open-air outfield bar was open on weekend nights for people to grab a beer, gaze at the green grass in front of them and dream about watching baseball there someday.

The kids playground and splash pad in the left-field corner became a popular summer destination for parents needing to get their kids out of the house. The Kinetic Club, the ballpark’s lounge on the upper level, was converted into a restaurant after Labor Day when the weather turned cool.

“It gave us a chance to really get to know the building,” Brown said. “People have flocked to it; it’s really been a wonderful way to expose people to a beautiful facility and get them excited about Cannon Ballers baseball.”

Many were converted into food service operators to feed customers coming in off the street. The team was able to salvage about one-quarter of its projected revenue for 2020 before the shutdown, Brown said.

“That’s the struggle a lot of teams are facing now because some of their good people are gone,” he said. “We felt like the investment in our people was worth it and it bore out even though we didn’t know that it would prove itself. It was a blessing.”

The city’s vision for the ballpark as a true community gathering place beyond the games is what attracted Brown to join the Cannon Ballers in 2018. He spent about four years with the Charlotte Knights as they opened a new Triple-A ballpark in 2014. 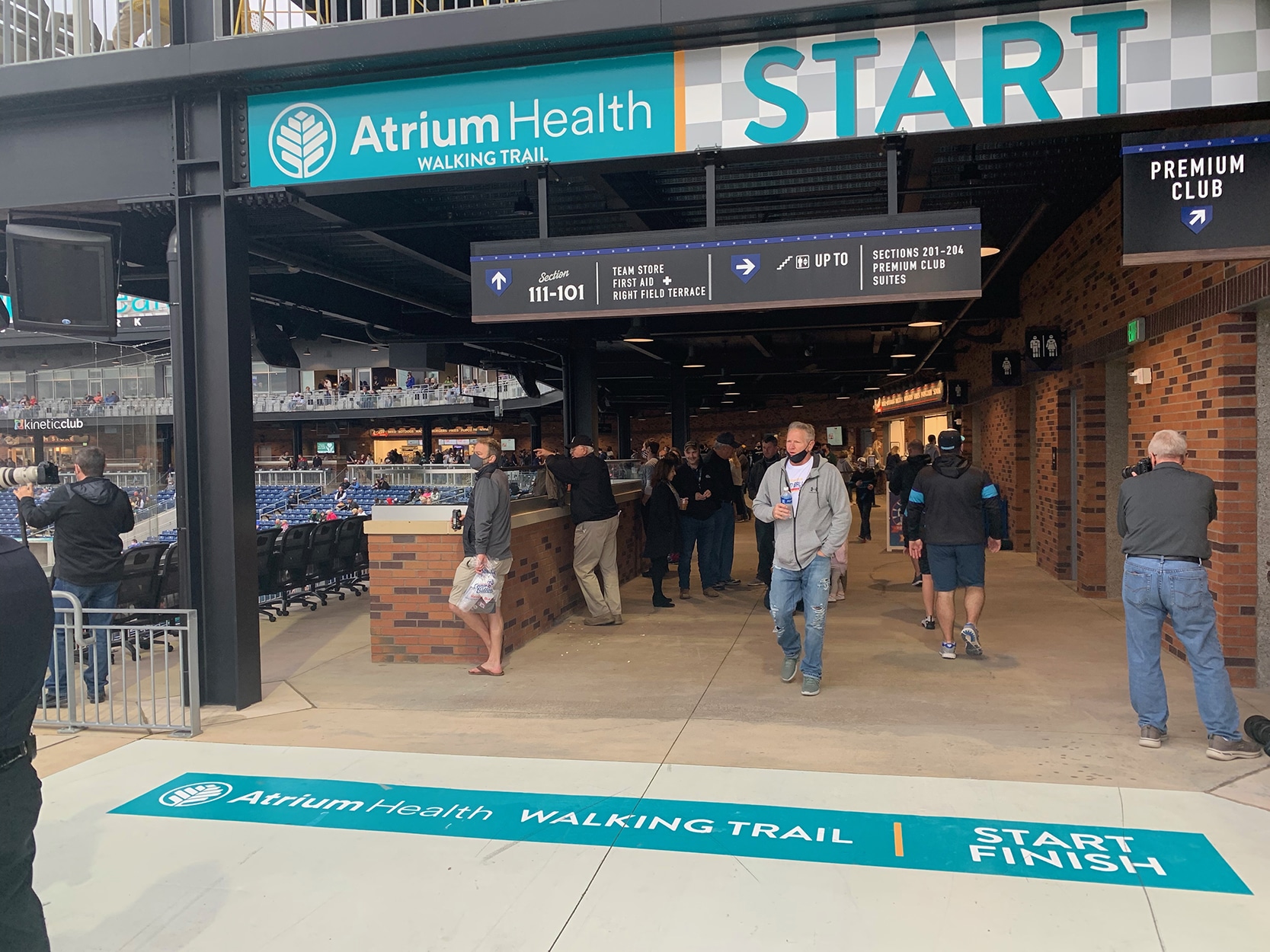 “We’ve got activity here every single day,” Brown said. “This is the place to be, and it’s really been fun.”

Over the past 10 months, there have been no security issues, he said. The ballpark is open to the public every day with the exception of Thanksgiving and Christmas.

The team partners with the city’s parks and recreation department to staff the facility and maintain it during public use hours, which extends to dumping trash and keeping the third-base restrooms clean and stocked.

The stadium operations and groundskeeping crew have offices in the ballpark. (The rest of the team’s administration works out of an old Wells Fargo Bank branch down the street.) The constant foot traffic and community pride helps out as well, Brown said.

“Usually, ballparks are locked down all day because everybody is worried about vandalism,” said Eddie Smith, deputy city manager, who led the city’s effort to develop Atrium Health Ballpark. “Ours is secure when it’s closed. A (tall iron) gate surrounds the entire property.”

Temerity Baseball bought the Kannapolis team in October 2018, which at the time was named the Intimidators after NASCAR driver Dale Earnhardt, a Kannapolis resident (and who died in 2001 competing in the Daytona 500).

In 2019, the new owner renamed the team the Cannon Ballers.

The ballpark sits on the former site of Cannon Mills, which stood among the world’s biggest textile mills.

For Smith, the biggest takeaway from the tour was to design wide concourses and plenty of storage space.

The change in ownership occurred midway through the design process. Temerity Baseball, headed by Andy Sandler, the group’s chairman and CEO, made few changes to the original blueprints, which reaffirmed the project vision for the city and the architect.

“They were surprised at how well the ballpark functioned,” said Jason Michael Ford, an associate principal with Populous and project manager on Atrium Health Ballpark. “It could have been a disaster.”

The ballpark is an anchor for redeveloping downtown in Kannapolis, a city of 50,000. Planned adjacent to the ballpark is a six-story building that will house team offices, a team store and about 200 apartments.

A proposed hotel is part of the mix. Over the past six months, a craft brewery and bar, bakery, hairstylist, soap company and candy store opened near the ballpark. This week, 18 residents moved into a 275-apartment building on top of a 400-space parking deck. All units are leased with move-ins phased over time, Smith said.

All told, the city has invested $100 million in revitalizing downtown. It’s paid off. For every dollar of public investment spent downtown, the private sector has responded with $4 of investment, Smith said.

“A previous owner of the team, Brad Smith, famously said, ‘Conveniently located to nothing,’” he said. “Motorists would get on and off I-85 to attend events at the old ballpark (built in 1995), never knowing there was a quaint downtown three miles away. The former park is best suited as a business park and that’s the direction it’s headed.”

At the new ballpark, designed by Populous and built by Barton Malow, two features stand out. The stadium’s batting cages at event level have windows facing the street providing views of hitters warming up for the game. 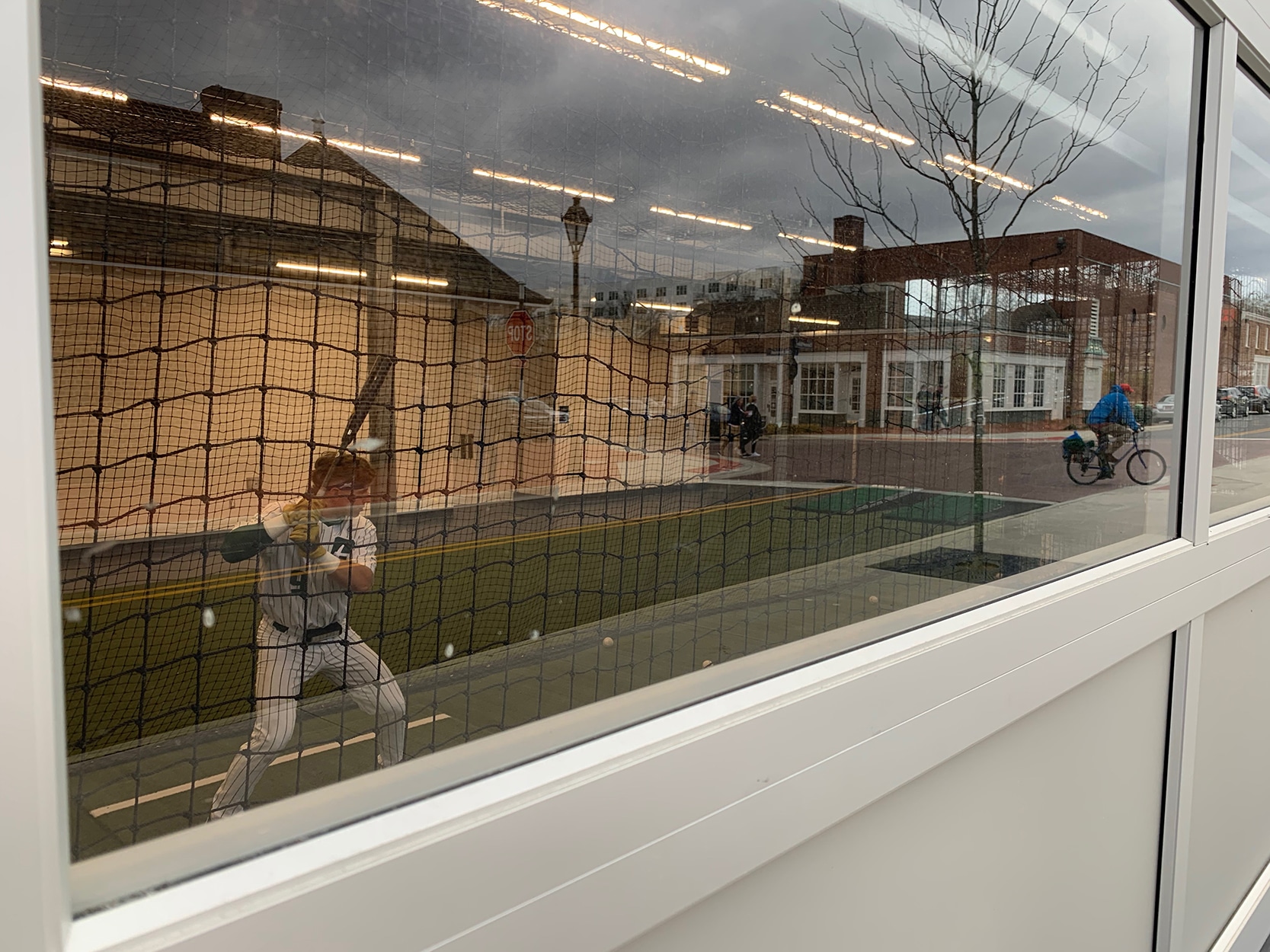 Fans can watch players in the batting cages through windows from outside the ballpark. (Don Muret / Staff)

It was part of the vision the city had for blending into the fabric of downtown, said Ford.

From that level near the batting cages, a tunnel leads to the field and the dugout suite, a premium space that connects to the home team dugout. Unlike other ballparks that market self-contained spaces with walls as dugout suites, the Kannapolis version is open-air and has more of a seamless feel for those sitting in that area.

“It puts them in the game with the players,” Ford said. “You get the same bench as they do in the dugout. You can’t get a better view. There’s no rail in front of you, just a backstop net. You smell things, see things and hear things that people up in the seating bowl can’t experience.”

The Cannon Ballers sell the dugout suite as a single-game space with 40 tickets for $2,000, which includes food and drink served in a party room next to the batting cages. Alcohol is a separate fee.

Atrium Health Ballpark has seven suites with 12 fixed seats that sell for $30,000 a year.

There are four 14-seat loge boxes, equally distributed down the first and third base lines. They’re sold for single games and consist of high-top chairs and counter space. The cost per loge is $195 and excludes food and drink.

The Sky Lounge, another open-air hospitality space, sits under the roof cover down the left-field line. The 50-ticket package includes food and drink and costs $1,675 for single games.

“We didn’t go crazy with premium,” Ford said. “Inventory remains fairly select in those categories. It’s still Single-A and that’s kind of how it’s always been with the picnic terraces and high tops. It has everything Globe Life Field has with the exception of the roof. We had to make it economical. That’s the hardest part in baseball.”

Concessions, run by Professional Sports Catering, a Levy affiliate, are reasonably priced compared with some other minor league parks. Hot dogs and soft drinks cost $4, cheeseburgers $5. Beers cost $6 to $7. City officials drove the point home to have family-affordable pricing in discussions with the team and the vendor, Smith said.

Atrium Health, the Carolinas’ biggest healthcare provider, signed a 10-year deal for the ballpark’s naming rights. The hospital’s wellness campaign fits well with the public park model through the branded walking trail on the concourse.

“It’s kept the team going strong and has brought people downtown, which has helped with recruitment of new businesses,” Smith said. “We’ve worked closely with local health officials. They knew what we were trying to do. As bad as it was, it’s still great for the team and downtown.”