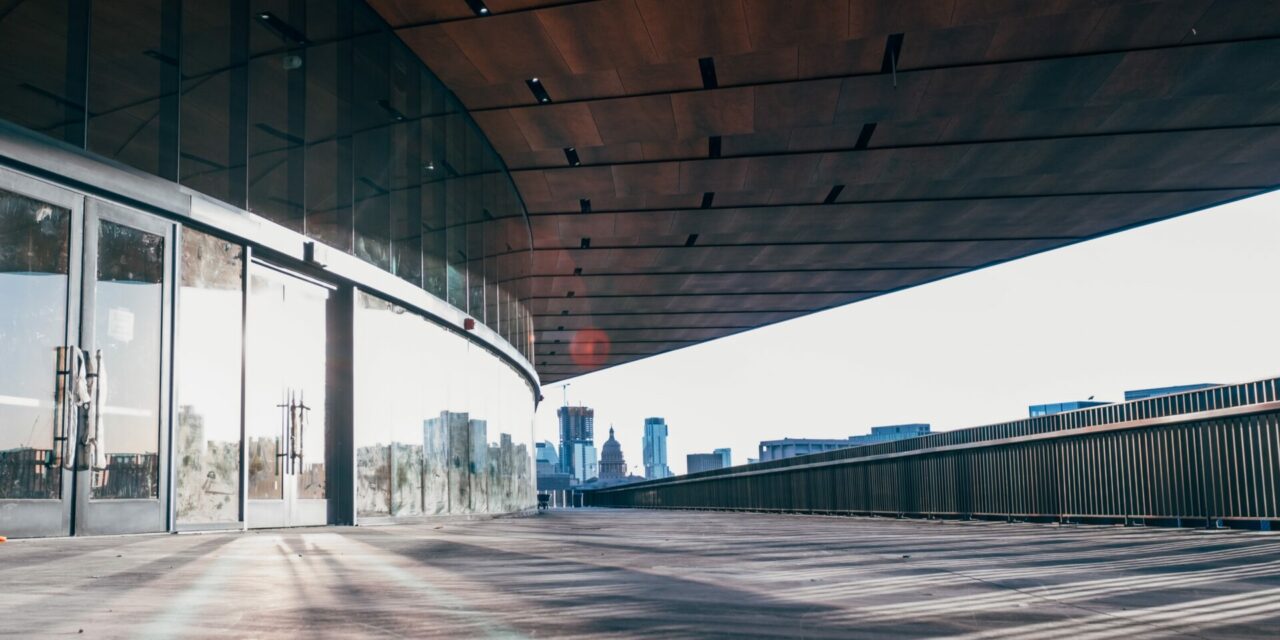 No challenge proved too tall for construction crew at Moody Center in Austin, Texas.

Under the red digital glare of a NASA-style countdown clock, AECOM/Hunt’s vice president of field operations Sid Perkins seemed cool and calm for a construction boss just days away from substantial completion of the $350-million-plus Moody Center to Oak View Group, the building’s developer and operator.

“This is normal for the end of a major (arena or stadium) project,” said Perkins, who has gone through the process 15 times and has been in the business for 50 years. “These last two to three weeks will be 70-hour-plus weeks. You get used to it and brace for it.”

He’s never failed to finish a project on time and on budget and Moody Center was not going to be his first, he said.

That’s despite the global disruption of the pandemic and the resulting supply chain nightmare, he said, explaining that being able to warehouse materials, including some that got through U.S. Customs before importation delays became unmanageable, was key.

“Without that, we would have been killed by COVID,” according to Perkins, who said the Italian wood that adorns the exterior “was in a warehouse in Dallas ready to be fabricated into individual pieces” long before it was installed.

“We allowed subs to draw for stored material,” Perkins said. “As soon as we signed the contract they (were able to) acquire the material, give us a bill of sale and put it in a bonded warehouse and we paid them for those materials.”

Still, some items that would normally take six weeks to get delivered would take 20 to 40 weeks, he said.

He said the Moody Center project may have been the most challenging for a number of reasons, not the least of which was getting trucks delivering construction materials in and out of the site.

“Logistics-wise, there’s no space,” he said. “I have a soccer stadium on the north, a new road project on the west, about 22 feet between myself and the energy plant that sits on the south and then on the east I go out to within about three feet of the I-35 frontage road. So, there’s zero space.”

In that regard, his experience on the new Busch Stadium, home of the MLB St. Louis Cardinals, was analogous to his work in Austin.

“Plus, it’s similar in that it had 35 feet of fall north to south across the site and it had 15 feet east to west,” he said. “This has a very significant fall.”

The coronavirus contagion threw multiple curves during the construction process.

For three weeks, Perkins and two other people were the only ones on his site staff who were not infected.

“We lost about 220 workers about 12-14 weeks ago with the Omnicron wave,” he said. “About a quarter of my workforce went out. It’s been difficult.”

The Moody Center was the only Hunt project — including SoFi Stadium in Inglewood, California — that did not shut down completely during the pandemic, he said.

Workers were masked for 10 weeks before the state of Texas mandated that there would be no mask mandates, Perkins said.

Another big challenge was getting the utility work done, what’s called ‘abling’ in construction parlance, he said.

“When I took the contract, there was $12 million in abling work which all had to be done around the (arena) before I could start any of the exterior,” he said. “That blossomed to about $25 million so it doubled in scope and had to be done in the same time period.” 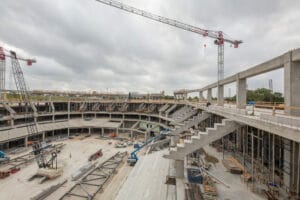 Dealing with multiple stakeholders — OVG, the university, architects — was no easy task either, but again, past experience proved invaluable as Perkins had worked on The Ballpark of the Palm Beaches, the Florida spring training stadium of the Washington Nationals and Houston Astros.

“It was similar in that I had two separate ownership groups to deal with,” Perkins said.

To keep Moody Center beneath the maximum height allowed by UT, 380,000 cubic yards of rock were excavated as crews dug 75 feet at the deepest point, Perkins said, adding that the rock was so hard two (Caterpillar) D-11 bulldozers, some of the biggest in the world.

“There’s on-grade entry at three different levels,” a first for Perkins, he said.

Speaking of utilities, schematics didn’t accurately specify depths, leading to “numerous design adjustments,” Perkins said. Utility work wasn’t completed until about February of 2022, “which limited my ability to pour all the hardscape, all the concrete around the building. We started utilities almost three years ago.”

Roof materials were not available, leading to alteration from original specs.

“I put a temporary roof on this in order to continue with interior work,” he said.

The permanent roof was in place and Perkins said “Texas Orange” pigment approximating UT’s signature Burnt Orange was incoming so that the Longhorns logo could be added.

“I’ve been scouring all over the world in order to get that pigment to make that (PVC) membrane,” he said, explaining that the precise Burnt Orange pigment was nowhere to be found.

Perkins likens his role to that of an orchestra conductor.

“Everyone has to be in tune with everyone going before and after,” he said. “I have about a 40-person staff here. My three senior superintendents have been with me for probably five or six stadium projects. We’ve had a great experience working together and we know how one another think.”

Moody Center isn’t his favorite project — that would be Comerica Park, home of the MLB Detroit Tigers, where Perkins spread his father’s ashes — but he loves the fact that the arena is being built as much for music as it is for sports.

“Music is my first love and I’m looking forward to coming back to Austin for the remaining years of my life and seeing a lot of good shows,” he said, adding that his tastes are as eclectic as the lineup Moody Center has already put in place. “Blues is probably my favorite. I saw Stevie Ray Vaughan here before he ever recorded. I saw Bonnie Raitt here. It’s just a great music town. I wouldn’t typically have taken this project but I figured I’d go to Austin and have three years of good music.”

The pandemic put a crimp in that plan, but with live entertainment coming back to life, Perkins is back at it, having seen Buddy Guy at Austin City Limits Live at the Moody Theater and he plans on hitting the iHeartCountry Festival at Moody Center on May 7.

In the end, it’s seeing the finished project that makes it all worth it for 26-year Hunt Construction Group veteran Perkins, who said “the amount of time, stress and pressure” of building a major sports and entertainment venue wouldn’t be worth it without that tangible evidence of completion.

“I don’t watch a lot of sports, but I can turn (the TV) on now and see one of my buildings every weekend, maybe two or three,” he said. “It’s very satisfying.” 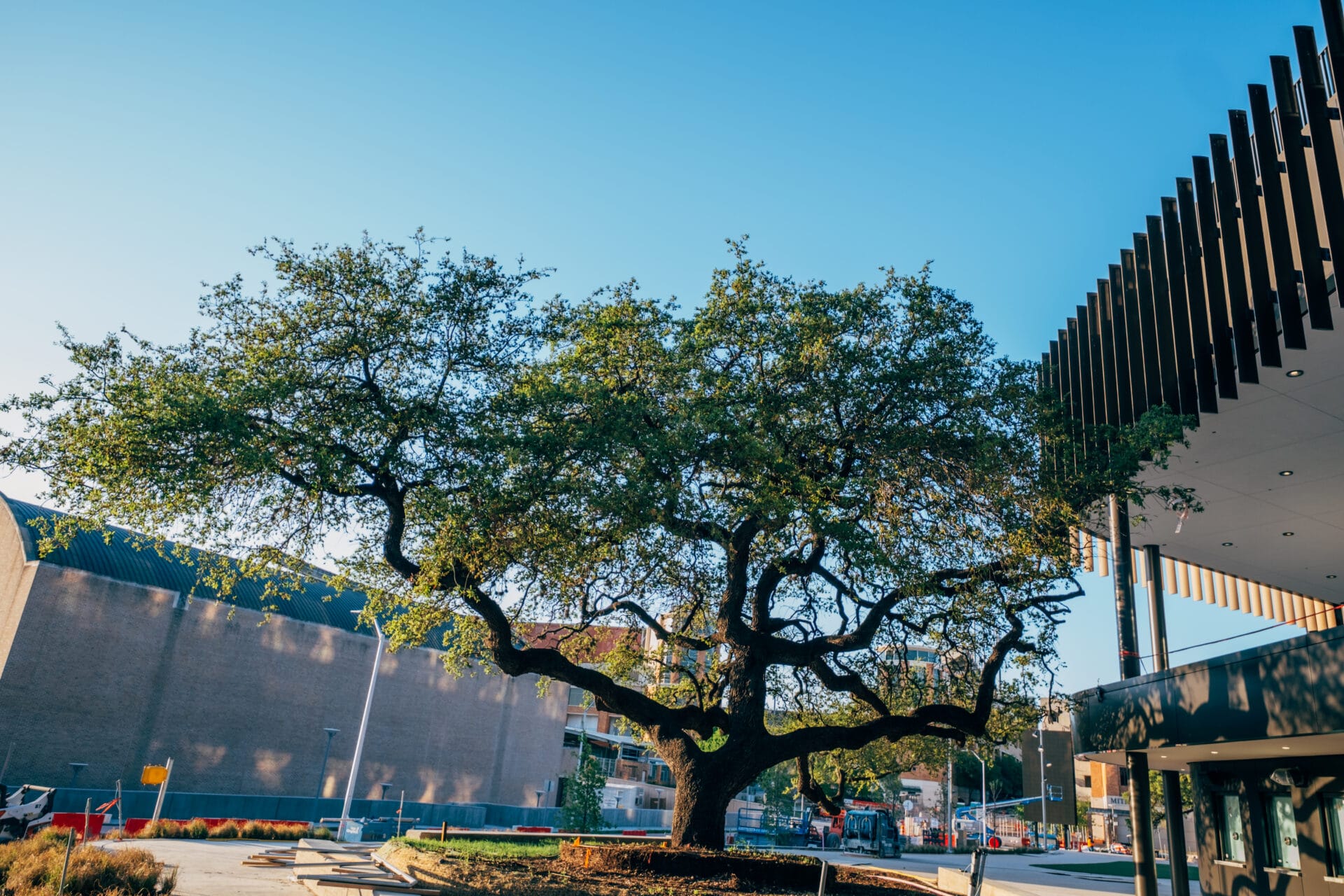 Some of the more than century-old oaks that grace the 437-acre University of Texas campus in Austin have been threatened — and saved — a number of times. A few of them were painstakingly preserved as the Moody Center arena was under construction.

“We relocated four huge live oak trees,” AECOM Hunt vice president of field operations Sid Perkins said. One is over 200 years old. “You have to excavate all the way around them. You drive pipe underneath them. Then you excavate and you put these big balloons underneath them; big, long balloons.”

The sprawling University of Texas Campus, affectionately known as “The 40 Acres” for its original plot of land designated by the state prior to its 1883 opening, is dotted with 100-year-old plus live oak trees.

Legend has it that three trees on the west side of campus were the only ones left standing on a hill that was cleared for a fort during the Civil War.

“You don’t want to touch trees in Austin,” Perkins said, noting the authority of arborists in Austin as well as UT who approve the removal or relocation of the historic trees.
A few smaller trees had to be cut down, but even then, they were taken to UT to be cut into boards where possible. What wasn’t used was ground down for use in planting beds throughout the campus and elsewhere in town, Perkins said.

“The intent was any tree you had to harvest, you made 100% use of all the material,” he said.