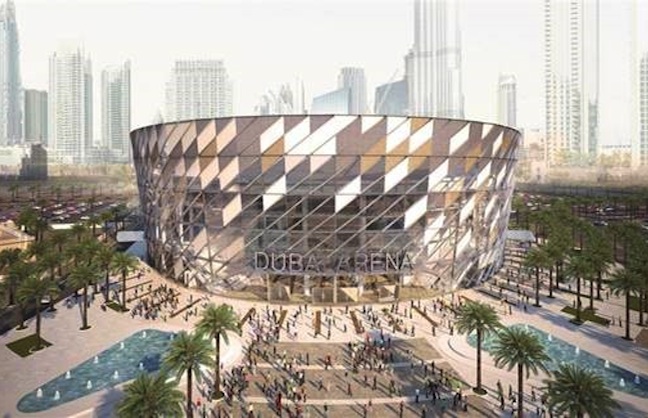 AEG Ogden, part of Anschutz Entertainment Group (AEG), has signed a 10-year contract to manage the 20,000-seat Dubai (United Arab Emirates) Arena, when it opens in 2018.

AEG Ogden Chairman and CEO Harvey Lister said the venue is on a fast track, given the ability to work multiple shifts on construction projects in that climate. Design is 60 percent complete and they will be on the ground in six months.

“It’s taken a long time for something to emerge out of the  Middle East that was real; there have been lots of dry gulleys,” Lister told Venues Today. This project is very real and has some exciting potential.

AEG Facilities Global Solutions division, which launched in August and is headed by Jay Cooper, will be heavily involved in the Dubai project, Lister noted. AEG Ogden has dispatched Steve Scott from its Brisbane headquarters and Gary Thomas from the Sydney office to Dubai.

Lister said a GM and the rest of the team will not be named for about six months, though internal candidates are being considered. There are a number of candidates ready to move up, but relocating people offshore requires the right personal family situation as well as professional know-how.

First, it is well positioned on the music trade route out of Europe and into Asia and Australia, “the yellow brick road.” It will be a lucrative new stop for international tours, he said.

Second, it is being built to accommodate a variety of events, most notably the large weddings that are major private events in the Middle East, many times multiple-day bookings. Likening Dubai Arena to T-Mobile Arena in Las Vegas, which he called the new benchmark, Lister said it will have that kind of National Basketball Association-caliber capability and state of the art production, but will be scalable. The architects will devise a way to bring the trusses down from the ceiling and move the walls in to create a mini-arena environment capbable of large-scale production for events like the weddings they will book, he speculated. “These are significant productions.”

They are also looking at sports events and family shows, both for the growing number of ex-pats and the well-educated locals, many of whom studied abroad. They will strive to accommodate the growing business of tourism in Dubai as well.

Dubai Arena is owned by Meraas, a Dubai-based holding company with operations and assets in the United Arab Emirates. Meraas follows a clear mandate to strengthen Dubai’s global position and has launched several projects in the property, hospitality, retail, healthcare, leisure and entertainment sectors. For more information: www.meraas.com

Dubai Arena will strengthen AEG’s position in the Middle East where stage one of the US$1.5 billion Oman Convention and Exhibition Centre opened last month and work is proceeding on stage two which includes a 3,000-seat theatre,  Lister said. “We have a full team on the ground there and have for many years.”

The City Walk site for the arena is in close proximity to the Dubai International Airport and accessible via the Dubai Metro.

The project management contract for the destination was awarded to DXB Entertainment PJSC.