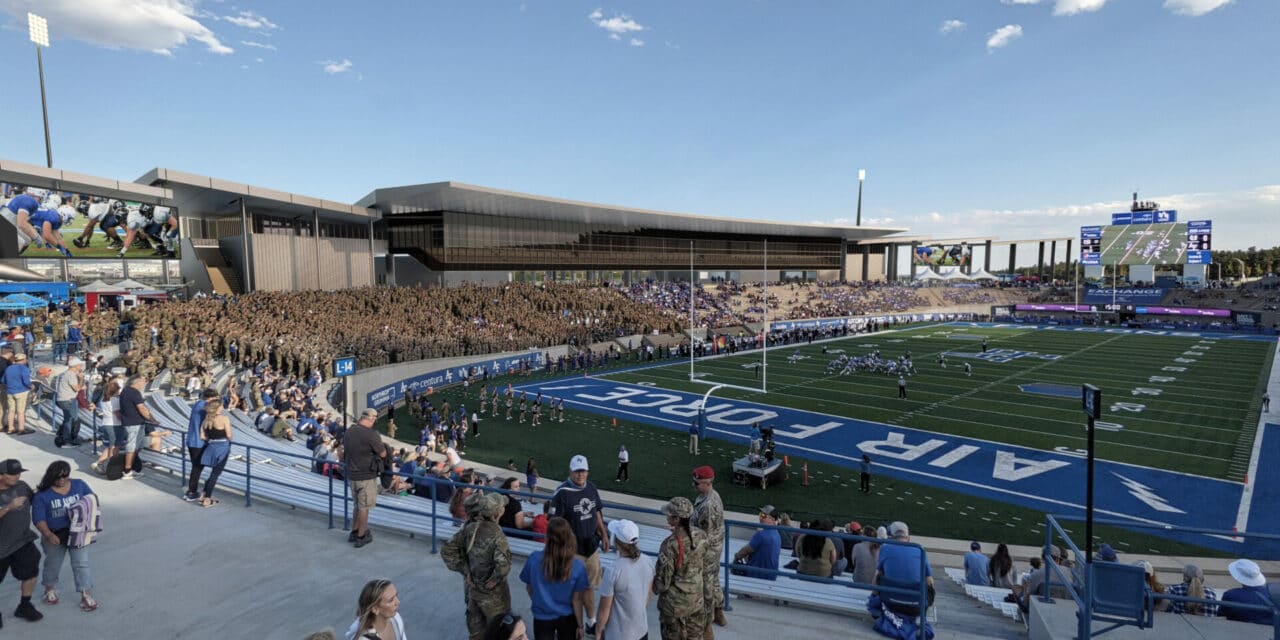 A photo composite shows the addition of a new building stretching across most of the east side of Falcon Stadium, to include a club tied to 1,500 seats. (Courtesy HKS)

The third phase of renovations to Air Force Academy’s football stadium, the centerpiece of which is the addition of 1,500 new premium seats, could potentially start after the 2022 season, according to Athletic Director Nathan Pine.

The $70 million project, part of a total of $180 million in improvements over multiple years to 60-year-old Falcon Stadium, was announced in September.

To this point, a timeline for Phase 3 has not been made public, but Pine feels confident the construction of an 88,460-square-foot building along the stadium’s east side could be completed in time for the 2024 home opener in Colorado Springs.

It will take 18 months to build the addition, which includes a club spanning 49,500 square feet supporting a mix of indoor club seats and loge boxes.

While the school’s development staff secures those pledges, Air Force Academy officials have teamed with HKS to complete design drawings, and are going through an environmental assessment required at the institution.

In 2015, the first phase covered two new scoreboards and ribbon boards in both end zones, an upgraded sound system and revamping the Blue & Silver Club on the stadium’s west side. The second phase, completed in 2018, introduced a club with 250 capacity on the north side, plus recruiting entertainment space.

HKS, headquartered in Dallas, has worked on Falcon Stadium improvements over the past four years.

As part of the third phase, the goal is to improve flow into the stadium with a new exterior plaza and grand entryway, as well as new restrooms, food and retail concessions for general seating on the east side.

In addition, a key piece is reconfiguring the field access ramp and removing some seats in the lower bowl to create enough clearance for semi trucks to drive on the field to allow Air Force Academy to expand its foray into holding concerts and other special events apart from college football, lacrosse, commencement and high-profile speakers addressing cadets on a regular basis.

“We did host the NHL Stadium Series in (February) 2020, right before COVID, and that was one of things we learned is the need to improve ramp and truck access,” Pine said. “It really makes load-in and load-out a more viable option for special events. It’s something we wanted to make sure we addressed in this phase along with premium seating.”

Market research, which included looking at college football stadiums at the University of Colorado and Colorado State University in Boulder and Fort Collins, dictated the demand for more club seat products.

School officials have also seen the work HKS did at Texas Christian University, where the $160-plus million renovation of Amon G. Carter Stadium features some of the nicest premium areas in college sports.

Loge boxes are part of the blueprints after school officials, as part of their research, heard about the appetite for the hybrid product at Coors Field and Empower Field, Denver’s MLB and NFL facilities.

When the east side expansion is completed, the final count of premium seats will make up 5% of total seating at Falcon Stadium.

At Falcon Stadium the 5% number is still well below other college football venues, where premium seats make up 15% to 20% of total capacity, Pine said.

Future phases could bump that percentage up in Colorado Springs, he said.

“Part of it is taking the approach that rather than go to the full 15% of the stadium (for) premium all at once, we’re going to grow into it,” Pine said. “We’ve got a little over 700,000 people in Colorado Springs and we have the population to support it. We’re being told by our fan base there’s a need for more than we have available now. We feel like we’re going about it the right way.”

The new club will be elevated above public spaces on the east side. The building design extends to heated outdoor decks flanking the north and south ends of the club that could be used to entertain recruits prior to kickoff and flipped over for corporate hospitality during the game.

Under NCAA compliance rules, recruits must sit in seats in the bowl once the game starts, Pine said.

The exterior of the new addition will carry through the distinctive international style of architecture prevalent on campus, a theme that hasn’t really translated to the existing version of the stadium, said David Skaggs, an architect and principal with HKS working on the project.

Much of what HKS has explored for design is inspired by aircraft used to train Air Force cadets, Skaggs said.

There’s a lot of metal on the exterior skin with aggressive shapes that harken back to various generations of fighter jets. The winged form of the roof overhead also calls to mind the image of an airplane, he said.

All told, Phase 3 will ultimately reduce total stadium capacity from 40,000 to between 34,000 and 35,000, which Pine feels is the sweet spot for football games.

“We’re not immune to the trend of lower attendance in college football,” he said. “We’ve seen good crowds this year, but it’s not at capacity. That’s telling us that by reducing that number a little bit but also adding some of the amenities we don’t have now will help us.”