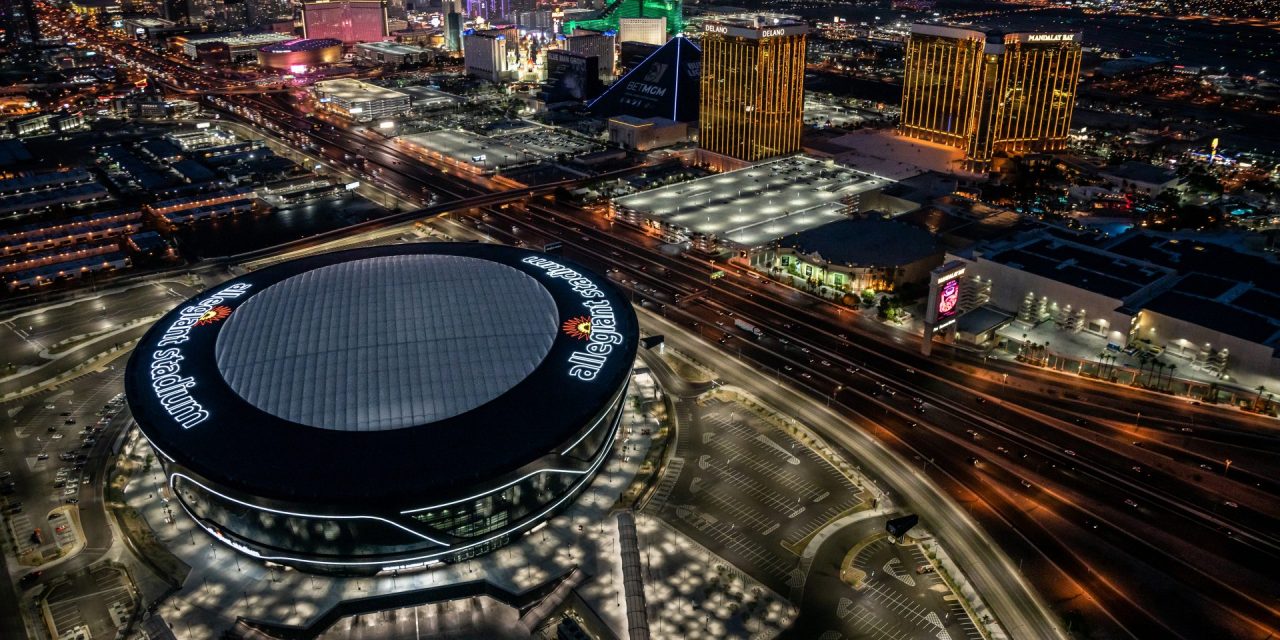 Allegiant Stadium, just off the Las Vegas Strip, has the flash to fit in with the city’s architecture. (Jason O’Rear/HNTB)

The exterior images of Allegiant Stadium, the sleek new $2 billion home of the Las Vegas Raiders, show a building that pops on the city’s famed Strip. White ribbons of LED lights accentuate the jet black outer walls. It’s a diamond in a city full of glitzy architecture.

For now, though, it’s a split decision in the market regarding the venue’s two tenants. Vegas, like the rest of the country, is in recovery mode during the pandemic. This season, Allegiant Stadium is closed to the public for Raiders games, a decision team owner Mark Davis made.

That’s not the case for University of Nevada-Las Vegas football, the stadium’s co-tenant. As of mid-October, the Mountain West school planned to allow a limited number of fans to attend the four home games, part of an abbreviated 2020 schedule. UNLV’s first home game is set for Halloween night against archrival Nevada-Reno.

Pat Christenson, president of Las Vegas Events and former director of UNLV’s Sam Boyd Stadium and Thomas and Mack Center, has toured Allegiant Stadium. In a city with a sterling reputation for high-end hospitality, Christenson said the Raiders captured the right balance of premium spaces to meet corporate entertainment needs and still provide enough general seating for hardcore NFL fans with views close to the field.

“It is surprisingly intimate,” he said. “We all know the evolution of suites changed the trajectory and the sightlines for stadiums. They’ll do 65% locals for the games, but then when you look at everything else, that’s predominantly going to be visitors.” 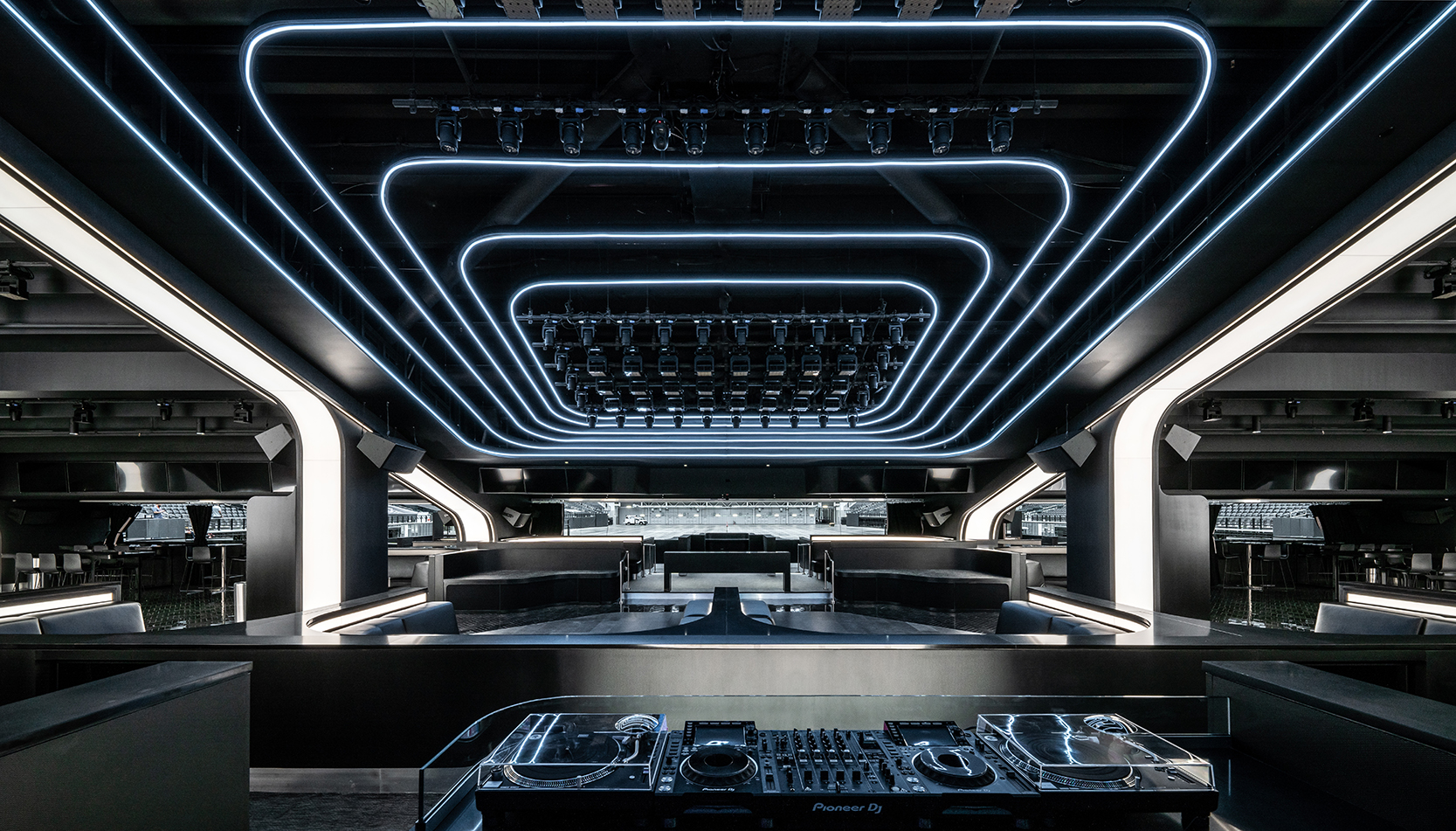 The stadium sits at the southern end of the Strip along Interstate 15, which forms the gateway into Las Vegas from Los Angeles. It’s appropriate, considering the Raiders spent a dozen years in Southern California playing at the Los Angeles Memorial Coliseum, sandwiched between 48 years the team spent at multiple venues in the Bay Area.

In Las Vegas, the rebranded Raiders put a stamp on the city as a big league market, a few years after the NHL’s Vegas Golden Knights arrived in town. Allegiant Stadium opened less than five years after the Raiders’ first meeting in Vegas with public and private stakeholders in February 2016, team President Marc Badain said.

The process from start to finish came at near-lightning speed compared with the team’s lengthy efforts to build a new stadium in California. The piles of faded blueprints date to 1992, when the Raiders proposed building a new stadium inside LA Coliseum, said Nichols, HNTB’s principal-in-charge at Allegiant Stadium.

Nichols worked on the LA Coliseum plan, along with other projects to renovate Oakland-Alameda County Coliseum to better accommodate the Raiders, who most recently shared the 54-year-old stadium with Major League Baseball’s Oakland A’s.

“This has been a 30-year pursuit,” Nichols said. “It’s been a privilege to finally help the Raiders get their new home. They spent a lot of time thinking about this project, realizing they had one opportunity to get it right.”

In 2015, HNTB teamed with Manica Architecture to design a shared-use NFL stadium in Carson, Calif., for the Raiders and the old San Diego Chargers. It fell apart after the Chargers moved to LA and became a tenant at SoFi Stadium in Inglewood, Calif.

Las Vegas quickly filled the gap. The two firms reunited for Allegiant Stadium with David Manica serving as the design architect and HNTB filling the role as architect of record. The joint venture of Mortenson-McCarthy built the stadium and CAA Icon was the owner’s representative.

“This is a real get-to-yes town,” Badain said. “By March 2017, we had public funding, land acquisition and league approval. For that to occur in 13 months doesn’t (typically) happen. There was a talented, coordinated group of people that saw a vision for this community and went about executing it. We were fortunate to be part of it.”

ASM Global runs Allegiant Stadium, and the management firm will pursue high-profile events such as the Super Bowl, Pro Bowl (which it is scheduled to host in 2022), Final Four and College Football Playoff, along with concerts, in a city that embraces the spectacle of those massive productions.

“It’s about all the other events that you can host in a venue like this and that’s a big part of the infrastructure that Las Vegas was missing,” Badain said. “The reason they got behind this project was to increase tourism, and the fact that it’s adjacent to the Strip was a bonus.”

For the Raiders, the benefit of such a long journey in stadium development was the extensive research they compiled during their tours of every new NFL venue opening over the past two decades, Badain said.

There are influences from other NFL facilities such as the removable field tray (State Farm Stadium) and giant glass doors (AT&T Stadium, Lucas Oil Stadium and U.S. Bank Stadium). In Vegas, they’re called lanai doors, a word that  comes from a kind of outdoor patio named for one of the Hawaiian Islands. 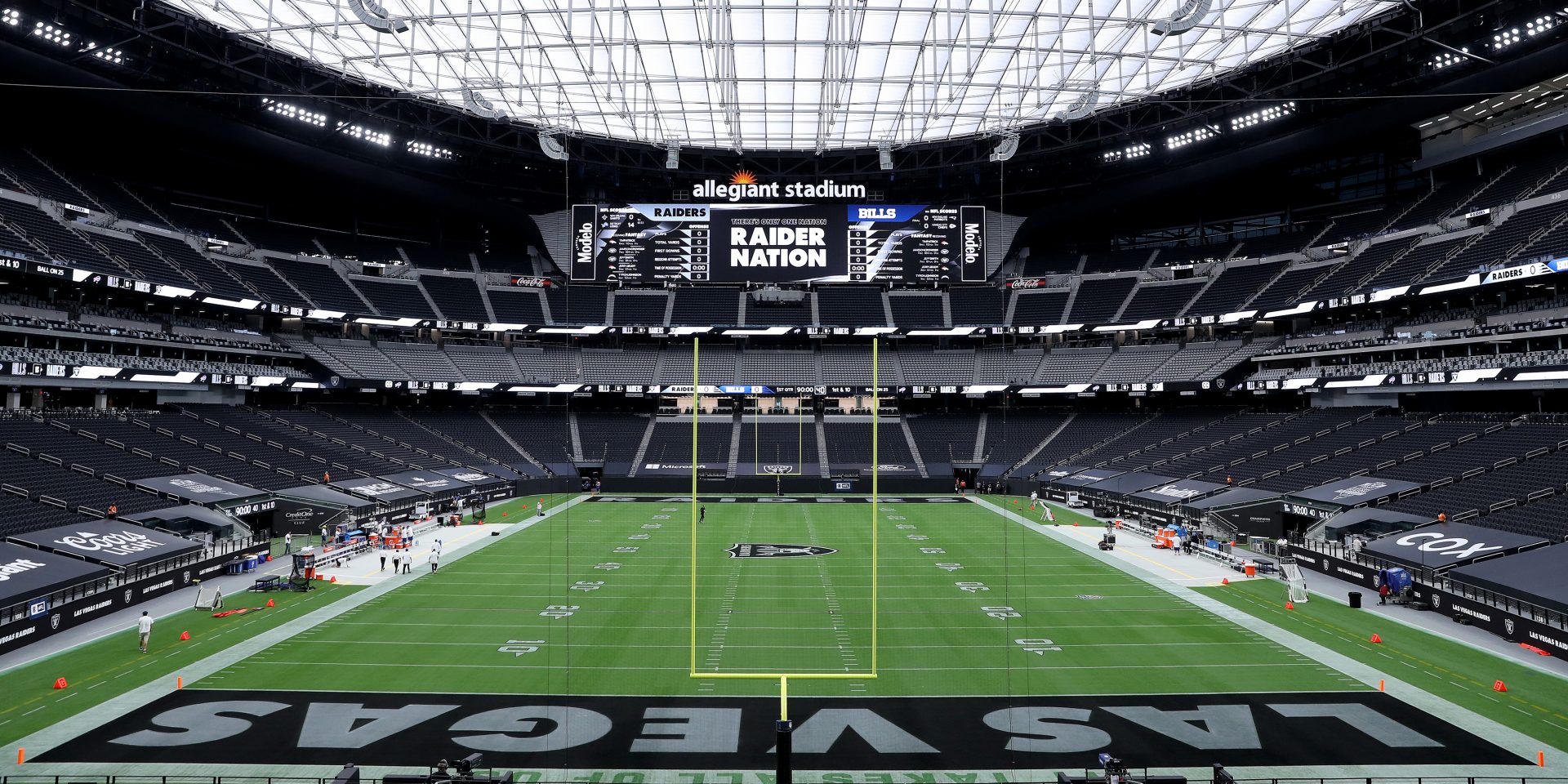 Light comes through the fixed ETFE roof at Allegiant Stadium before a day game. (Getty Images)

Those four doors fill a space 80 feet tall and 220 feet wide on the north end and open to an expansive view of center city Vegas and the nearby Luxor and New York-New York hotel casinos. The doors provide the open-air feature that the Raiders desired after going with a fixed roof over a retractable structure.

Allegiant Stadium’s centerpiece is the Al Davis Memorial Torch, situated at the stadium’s south end. It’s a tradition first started by the Raiders in Oakland and Los Angeles, where former players lit a real torch before NFL games.

In Vegas, the simulated torch is named for the Raiders’ founder and father of Mark Davis. Al Davis died in 2011.

In that same end, the notorious Black Hole, filled with the team’s most fervent fans in menacing costumes matching the Raiders’ black and silver colors, will take shape after they’re admitted back into the stadium post-COVID.

The Black Hole originated in Oakland and many season-ticket holders that sat there bought seats in Vegas to resume the tradition. At Allegiant Stadium, the Raiders won’t sell sponsorship of the new Black Hole.

“It’s something that the fans created organically, and that they technically own as a brand,” Badain said. “It’s not our mark. Our expectation is the crowd and the game day experience will be just as exciting as it’s always been.” 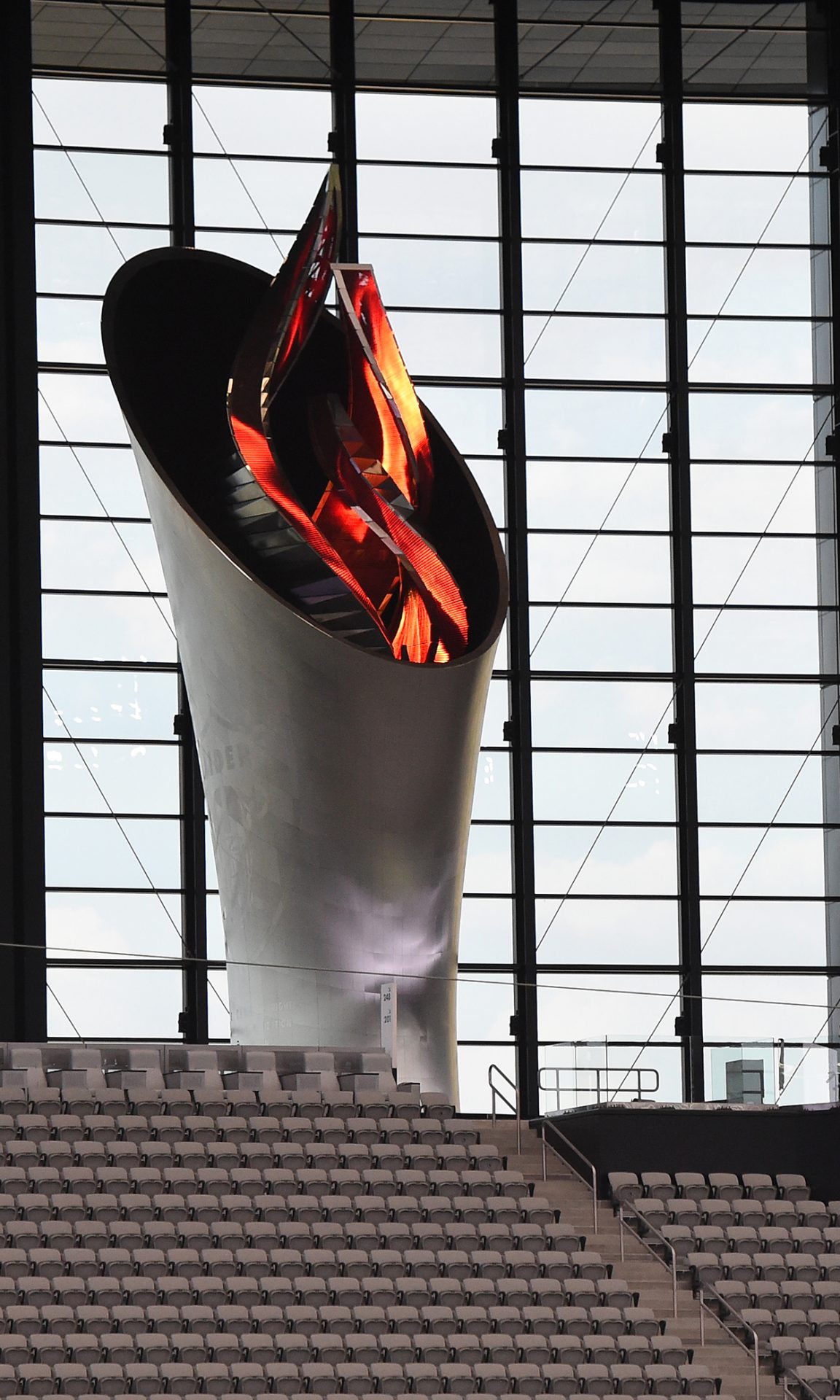 All told, 60% of season-ticket holders are from Nevada and a little over 20% are from California. The original projections were 75% local and 25% tourists.

From that standpoint, more Raiders season-ticket holders than first anticipated will travel to Las Vegas for a big weekend. The team drew a strong response from Northern California and it was even stronger from Southern California, Badain said.

“At one point, we had 80,000 people on the season-ticket deposit list,” Badain said.

The cost to buy tickets is a separate fee. Those prices run $4,500 a person for a midfield seat to $650 a person in the stadium’s upper corners, according to the Raiders’ website.

Most premium inventory has sold out among the 127 suites, 8,100 club seats and 88 four-seat loge boxes.

In Las Vegas, the gambling capital of North America, the potential for sports betting at Allegiant Stadium will most likely be a mobile platform, per NFL and local restrictions. Badain is unsure when the platform would be activated.

Mobile betting takes precedence over a brick-and-mortar sportsbook because of the agreement the Raiders signed with the Las Vegas Stadium Authority for hotel taxes to provide $650 million in public funding for construction.

“There’s a provision for no gaming inside the building, which was important to (protect) the resort corridor helping to fund the venue,” Badain said. “We have no issue with that. It was before the federal ban on sports gambling got struck down (in 2018) and the landscape changed substantially. If it changes, it requires (new) legislation.”

Caesars Entertainment, MGM Resorts and San Manuel Casino are all founding partners with branded hospitality spaces as part of their deals. MGM alone bought a 100-plus person suite/club combo. In theory, there’s no shortage of hangouts for gambling enthusiasts to place wagers on their mobile devices.

Allegiant Air, the stadium’s naming rights holder, signed a 20-year deal reportedly valued at up to $25 million annually. The Las Vegas-based carrier will have plenty of opportunities to fly clients to town and entertain them at a game, Badain said.

One hospitality space yet to be branded is the North End Zone Field Club, featuring one row of standing-room space with banquette seating behind it. The event-level lounge was inspired by Las Vegas nightclubs such as Hakkasan, designed with two DJ booths, a dance floor and theatrical lighting. It’s a mix of Vegas culture and sport and will also be a great product for concerts, Badain said.

Before the pandemic hit, Allegiant Stadium was poised to become the first new NFL venue as a cashless operation. Over the past seven months, many arenas and stadiums have made that conversion to protect fans and staff.

In that respect, the Raiders and Levy, their food provider, were ahead of the game.

“We’ve seen the market trends which (Mercedes-Benz Stadium) started, both for cashless and fan friendly pricing, which you’ll see in our building,” Badain said. “This market has very high expectations and you have to over deliver for your clients.”

Levy is familiar with those standards. The Chicago concessionaire has a major presence in Vegas, running food at T-Mobile Arena, Las Vegas Speedway and Las Vegas Ballpark, plus other restaurants in town.

Parking, always a top concern for customers, should not be an issue, Badain said.

There are 2,500 parking spaces on site and the Raiders spent more than $50 million to acquire additional property near the stadium and lease other parcels for 17,000 total spots. That’s more than the 11,000 to 12,000 spaces the team needs for game day parking, per their research.

“This will be a stadium where a lot of people will use ride share, shuttles or by walking,” Badain said. “They’re going to close the Hacienda overpass, which is the street that connects us to the Strip. From the Luxor, Mandalay Bay and Delano hotels, you can walk across the bridge and make your way into the stadium.”

For Raider fans, it’s a pathway they have to wait a bit longer to use.

“It’s going to be an electric place for Raider Nation to call home,” Badain said.