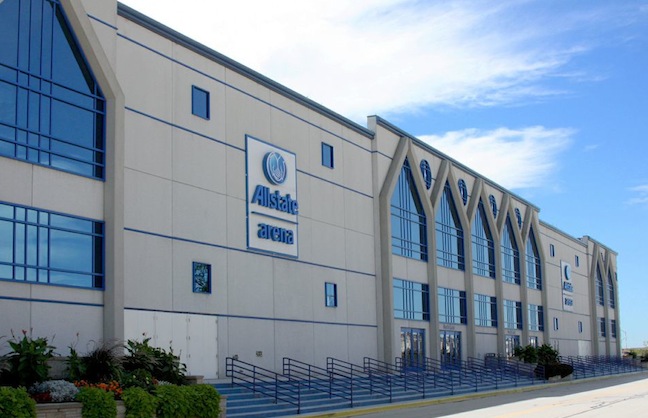 Allstate continues a long partnership with local arena in its homestate. (Photo by Allstate Arena)

Though it may seem like facilities change names quickly these days, some partnerships prove the test of time. Allstate and Allstate Arena in Rosemont, Ill., have come to an agreement that will maintain the venue’s name for an additional 10 years, adding up to a 25-year relationship.

Pat Nagle, executive director at the 18,500-capacity arena, said he couldn’t be more thrilled to continue the partnership with Allstate, in part because of the company’s people.

“Not only are they one of the elite companies in Illinois and are very well known and well respected, the best part is the people I deal with over there are top of the line,” he said.

The 10-year, $15-million deal will be paid in $1.5-million-per-year installments and includes a five-year extension option.

The value for the facility’s naming rights has gone up. When Allstate first came on board for sponsorship, the initial deal was about $10 million over 10 years, later renewed for an additional $5 million for the subsequent five years.

“Allstate continues to value its relationship with Allstate Arena and the Village of Rosemont, Ill., and considers the partnership with the arena an important component of Allstate’s hometown insurer strategy,” said Amanda Polito, Allstate integrated Marketing Communications director. “The arena supports Allstate’s strategy by offering a variety of entertainment and sports events relevant to a broad range of consumers.”

The 34-year-old venue has focused upgrades to stay current in the market and continues to bring major events to the market. For instance, Garth Brooks is kicking off his tour at Allstate Arena with 11 shows beginning Sept. 4.

“We sold out of 10 of the shows in two-and-a-half hours and added an 11th show,” said Nagle, adding that the concerts will account for more than 200,000 tickets.

Funds from the deal will go toward replacing a more-than-decade-old videoboard sign on the most-traveled road in Illinois, I-94. Allstate will maintain its suite in the deal as well as all prior assets. There may also be a few unique additions.

The arena is looking into putting signage on the roof of Allstate Arena.

Nagle said the idea came about courtesy of Google Earth and a nearby Target Superstore that displays a giant red bullseye logo on its roof.

“Allstate saw that and wanted to know if they could do something like that on our roof, so we said we’d look into it,” said Nagle. Funds from the naming rights extension will also go toward this additional rooftop signage.

Allstate will also receive a free rental of the arena for an upcoming charity event. The event will sell tickets, with the proceeds going toward the facility’s hard costs only, and the rest going to the charity.