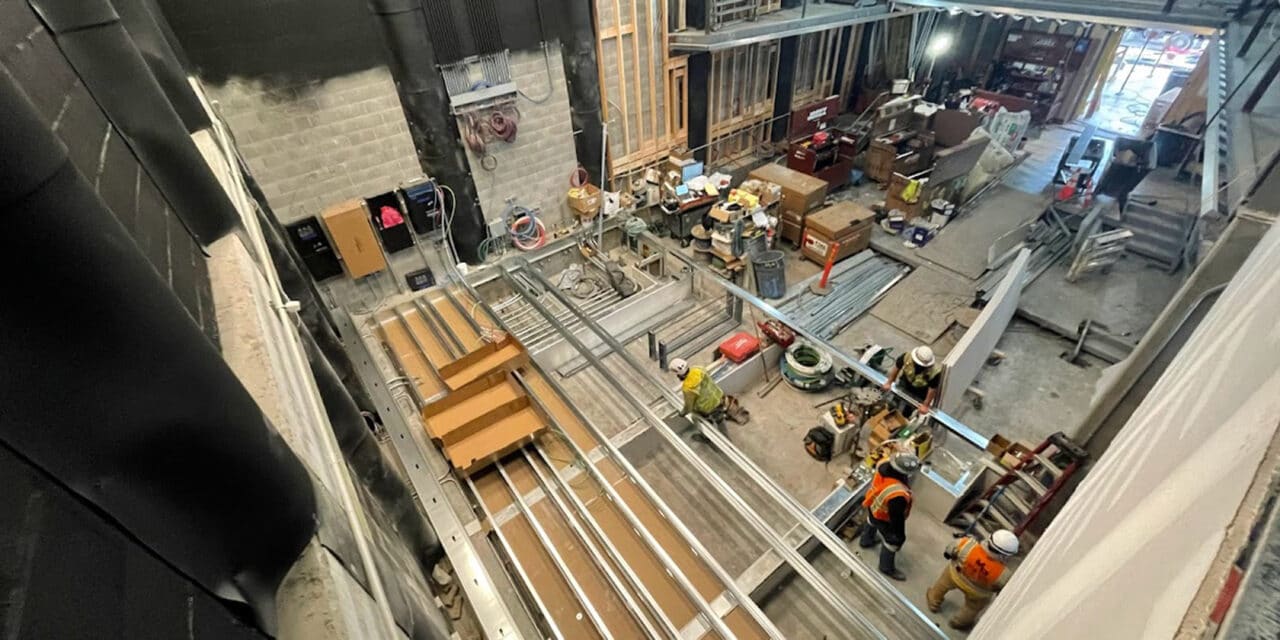 A construction shot from inside The Guild Theatre in Menlo Park, California. (Drew Dunlevie / Courtesy venue)

The independent Guild Theatre in Menlo Park, California, will have its grand opening as a state-of-the-art concert hall Jan. 18 with its first concert, headlined by Portland, Oregon, alt-rockers Strfkr. The theater is run by the nonprofit Peninsula Arts Guild, which has established an exclusive ticketing partnership with ticketing platform Dice.

“We’re thrilled to see the project finally come to fruition,” said Peninsula Arts Guild President Drew Dunlevie. “We started the nonprofit four years ago with the simple goal of bringing some entertainment and culture to an underserved market here in the mid-Peninsula. We also look forward to supporting many artists’ philanthropic endeavors. We like to say we’re solving for fun and good.”

Added Dice President Russ Tannen, “Dice is excited to be joining forces with The Guild Theatre, which is poised to become an incredible live events space in Menlo Park. Seeing a show at the Guild will always be a seamless and fair process for both the fan and the artist.”

The newly remodeled music and event performance space has a capacity of slightly over 500 and will feature a schedule of diverse events from rock and soul to Americana, jazz and world music, with artists both local and universally known.

The Guild Theatre was one of the last of the single-screen movie houses in the area, closing its doors in 2019 after a nearly 93-year run. The new venue will boast a full cinema surround sound system and audio created specifically for the room by Meyer Sound and renowned audio engineer David Vincent, who has worked with Metallica, Cirque du Soleil and the Montreal Jazzfest. Among the industry vets who’ll be running the venue are General Manager Tom Bailey, who held a similar post at the Capitol Theatre in Port Chester, New York.

“The Guild Theatre will be a first-rate venue in all respects, from state-of-the-art sound and lights to a unique, stylish and spacious ‘green room’ setup for our talent, to top-quality beverage options — at reasonable prices — for our patrons. We intend to make Menlo Park a nightlife destination with great live music and hope to become a cornerstone of this community,” Bailey said.

The Guild Theatre is hiring qualified candidates to join in on the action. For more information, go to guildtheatre.com/employment.

This story first appeared on Pollstar.com.