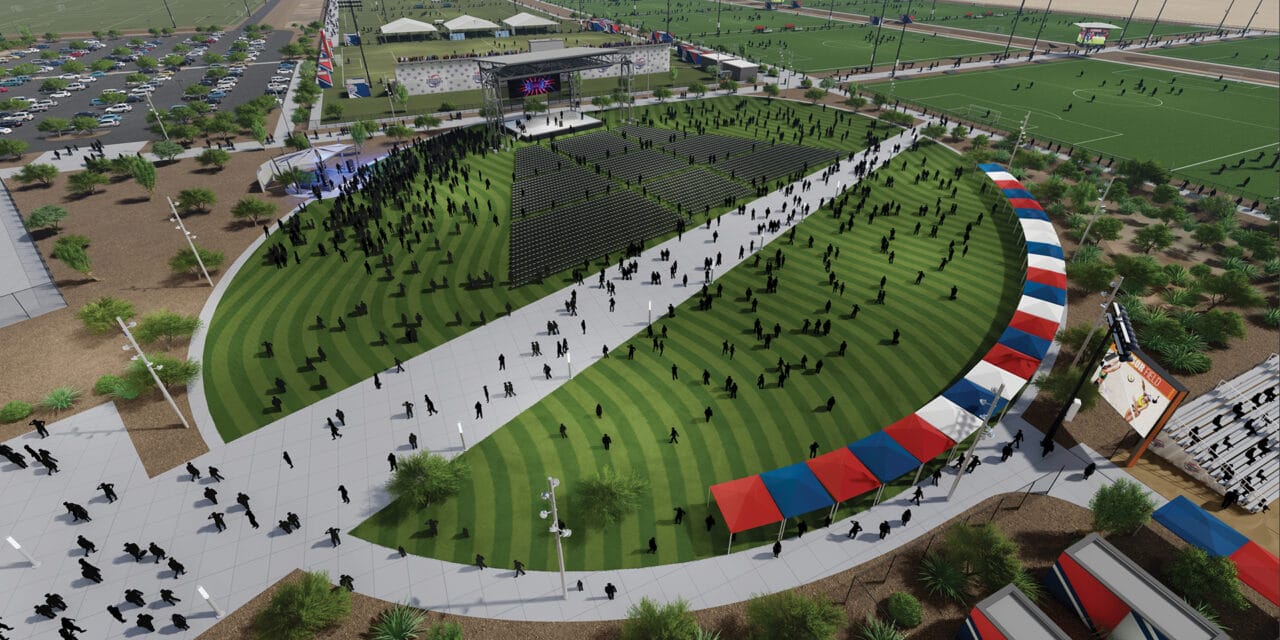 The sports complex, shown in a rendering, will include an amphitheater that can be used for concerts. (Courtesy Legacy Sports USA)

Complex, set to open in January, covers 320 acres in Phoenix suburb of Mesa

Bell Bank has signed a 10-year naming rights deal for a massive youth sports complex under construction in Mesa, Arizona, as the North Dakota-based financial institution expands its presence to key markets across the country.

Financial terms were not disclosed, but industry sources said the annual value runs in the low seven figures.

Naming rights for these types of venues typically run under $500,000 a year, said officials with OVG Global Partnerships, the agency brokering the deal for the developer and OVG Facilities, which was selected to run the complex.

OVG Partnerships and OVG Facilities are both divisions of Oak View Group, which also owns VenuesNow.

The scope of Bell Bank Park provides immense value, according to project officials. It’s projected to host 5 million athletes and their family members every year. That number is greater than the combined annual attendance for Phoenix’s four big league teams, they said.

Bell Bank, a 55-year-old company based in Fargo, North Dakota, operates in retail banking and mortgage banking, among other financial services. The bank has more than $10 billion in assets.

In Mesa, the naming rights agreement builds on the bank’s other sports-related assets.

Sarver previously worked for Minnesota United FC in sponsorship sales and for the Minnesota Timberwolves in community relations. She contacted Brach and discussed  the opportunity before submitting it to Kyle Kennedy, president and banking director for the Phoenix region.

Over the next two months, Bell Bank and OVG engaged in talks for naming rights before the deal was signed.

Bell Bank continues to expand its presence across Arizona after acquiring a mortgage company there in 1998. Twenty-one years later, in 2019, Bell Bank opened its first full-service location in Chandler.

Kennedy joined Bell Bank in 2019. He was focused on sponsorships of Phoenix’s big league teams before he toured the Mesa complex and met the Legacy Sports group. Through those discussions, he realized it would become the largest youth sports complex in the country, with 75 more acres than ESPN Wide World of Sports in the Walt Disney World Resort near Orlando, Florida.

“We view our bank as being a little bit different and to have a park stick out like that was really intriguing,” Kennedy said. “We started doing the math … and all of a sudden, it became (a situation where) we have to do this. It will be a great investment.”

The bank has three retail locations in Greater Phoenix, the country’s fifth largest city. It plans to open three more full-service sites, to go along with five mortgage banking branches.

Dan Griffis, president of OVG Global Partnerships, said, “They are investing heavily in Arizona and saw this as a platform that would give them opportunity, based on the pure amount of people and families that will be coming through and enjoying this complex.”

Legacy Sports USA formed Legacy Cares as the nonprofit overseeing the complex, which in turn signed a deal with OVG Facilities to run it. Project funding came through a series of tax-exempt bonds issued by Ziegler, a specialty investment bank.

Legacy Sports and some of its partners maintain an equity share, according to Chad Miller, the company’s CEO.

The complex meets the demand for club sports that need places to play and compete on weekends. Legacy Sports USA officials have signed 10-year contracts for most of its Mesa venues, Miller said.

The complex has commitments from groups across the country, as well as the United Kingdom and South America, he said.

It will be the home of USA Pickleball, the national governing body for the fast-growing sport played with a paddle and a plastic ball with holes. It blends elements of tennis, badminton and table tennis. All told, Bell Bank Park will have 41 pickleball courts.

In addition, there is a 17,000-square-foot restaurant, plus other food concessions across the park to accommodate athletes and families coming from out of town. OVG Facilities plans to run the concessions operation in-house.

Live entertainment is a key component of the property.

Bell Bank Park has a concert venue called the Great Lawn, a three-acre amphitheater with a permanent stage in the center of the complex. It backs up to an entertainment corridor that Miller compares to Fremont Street in Las Vegas.

Twenty-five acres has been designated for music festivals and overflow field space.

The vision is to book national touring acts and family-style shows at the Great Lawn on the weekends through OVG Facilities and its relationships with national promoters, Miller said.

Apart from naming rights, OVG has sold eight sponsorships for the complex and the group expects to sell up to 20 partnerships, Griffis said. To date, no other deals have been announced.

Bell Bank Park is the first of three youth sports complexes Legacy Sports USA plans to build. The other two projects will be announced over the next 90 days, Miller said.