Cheq In: Friends outside venue can order concessions for fans at events 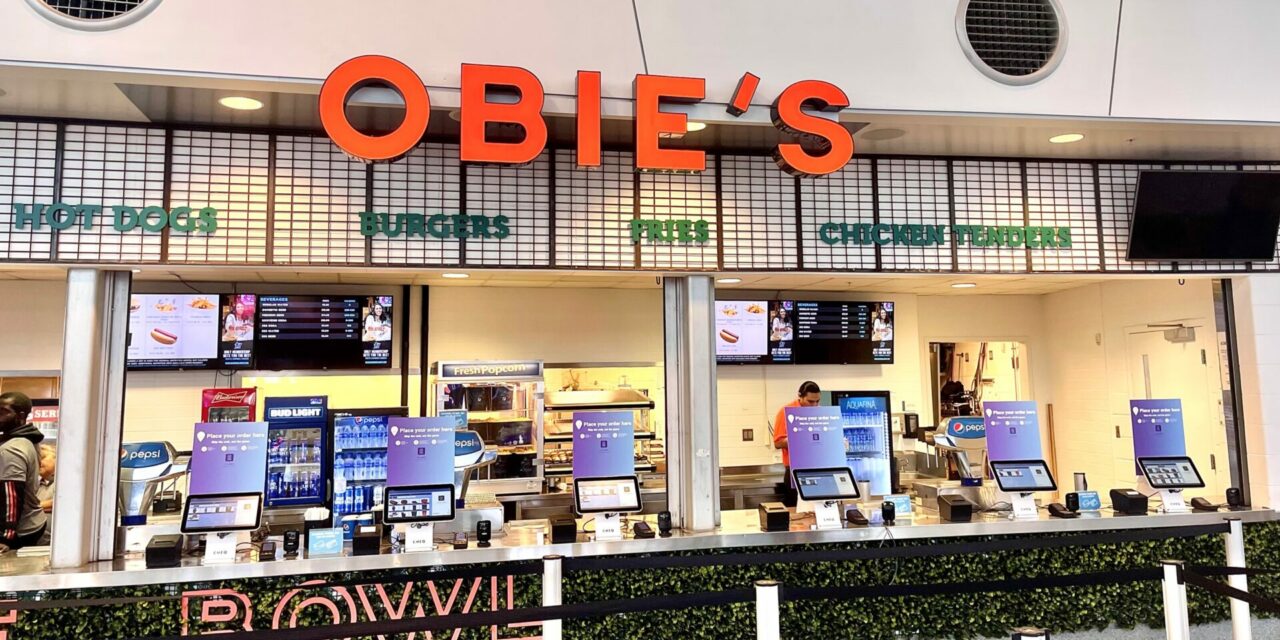 The Miami Dolphins have signed a deal with mobile point-of-sale vendor Cheq, which extends to a social media component allowing followers outside Hard Rock Stadium to order food, drink and merchandise for delivery to fans attending the event.

The five-year agreement includes a sponsorship role and positions Cheq as the Dolphins’ official in-stadium mobile ordering and delivery partner.

The Dolphins were on the front end of mobile delivery connected with social media when they tested Tweet-a-Beer in 2014. Most recently, the Dolphins have run mobile ordering in-house on a limited basis in conjunction with their concessionaire Sodexo Live! as more teams and facilities expedite the technology as part of upgrading health and safety protocols during the pandemic.

“As our fans are now used to using mobile across the board (including ticketing), we wanted to make sure they had the easiest possible way to make the whole experience smoother,” said Jeremy Walls, senior vice president and chief revenue officer for the Dolphins and Hard Rock Stadium. “It’s been express pickup and the fans that did use it enjoyed it, but by using Cheq we can scale it more and it’s all on us to market it appropriately.”

Cheq, an 18-month-old Seattle startup, got its start in bars and restaurants and has 100 clients in that industry. At sports venues, Cheq competes against Venuetize, Appetize, MyVenue, Square, Clover Sport and Shift4 in the point-of-sale space for  mobile ordering and kiosks.

At Hard Rock Stadium, Cheq will install kiosks at five concession stands on the 100 and 300 levels. For teams and concessionaires that prefer to keep their POS system intact, Cheq is agnostic and can integrate with others on the back end for inventory management and sales data, Stone said. 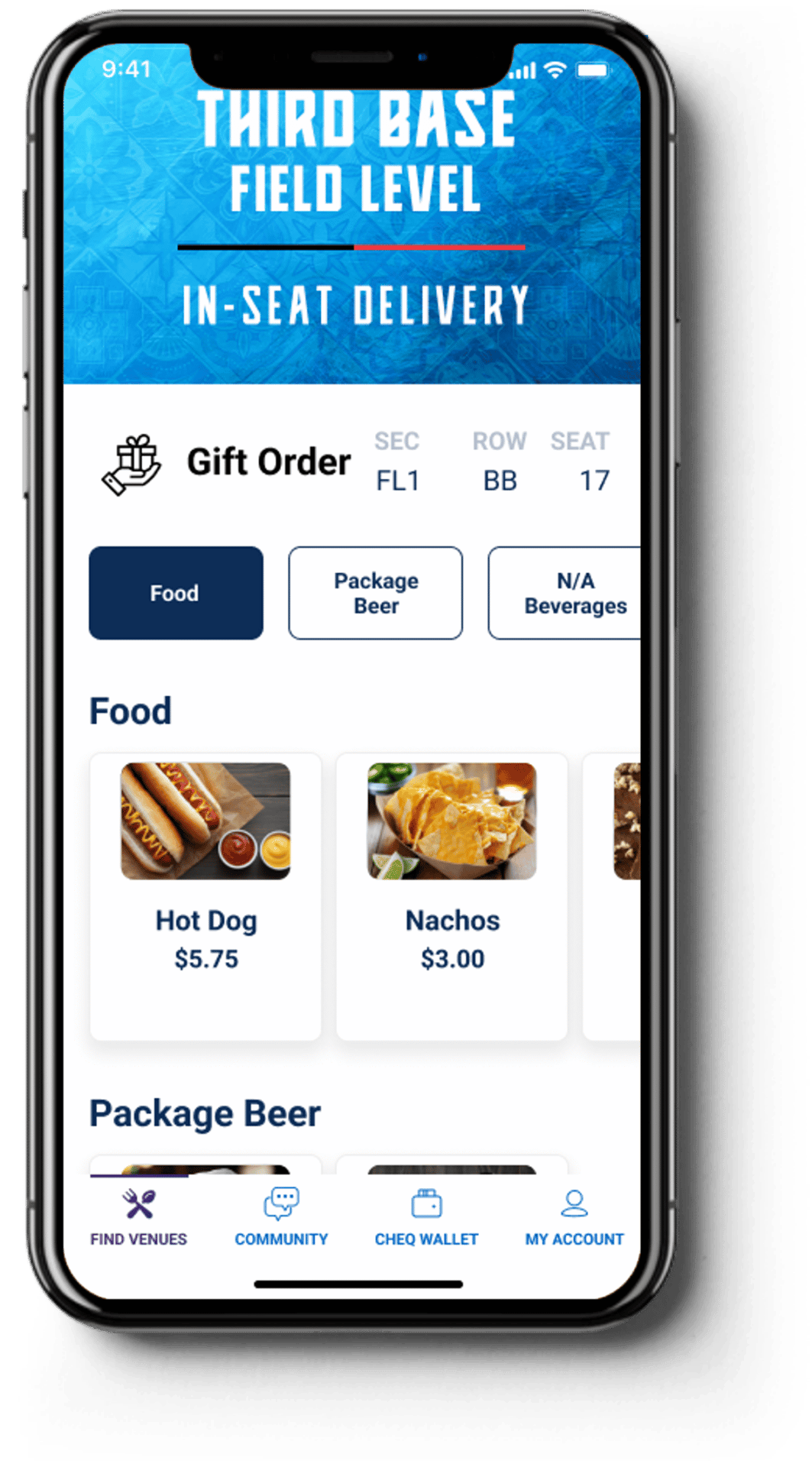 CHEQ IT OUT: Cheq’s mobile order platform is tied to social media.

For Cheq, which charges a small fee to the consumer for all mobile order transactions, both in-venue and outside the facility, the power of its platform is the social payments function. It’s something new in sports for a POS firm, Stone said. The social media element for both the Marlins and Dolphins stadiums will be activated in September. Levy runs the food at LoanDepot Park.

“We’ll work with Cheq on innovations that make sense, test some things in Year 1 and grow from there,” Walls said. “All the creative ideas — we like that they think that way, but we wouldn’t have done the deal if the core technology wasn’t going to help our fans.”

Here’s how the social media piece of the technology works:

Fans attending a Major League Baseball or NFL game in south Florida can update their status on the Cheq mobile application and other social networks to let family and friends know they’re in attendance. With a few clicks, social media followers in Los Angeles, for example, are steered to the Cheq app, where they can order from a menu of  food, drink and retail items to be delivered to their friend’s seat. The app accepts ApplePay, GooglePay and Samsung Pay, among other forms of payment. Fans sitting in sections without in-seat delivery receive a QR code attached for pickup at a designated area, Stone said.

For alcohol purchases, the person on the receiving end must provide proof of legal age before obtaining the item, Stone said.

On their own, teams can use Cheq technology to send gifts to season-ticket holders in real time, he said.

“Our consumers are the marketplace with the ability to increase transactions in stadiums by not just people inside the venue,” he said. “That’s our goal. We’re excited to roll it out because it’s working well with our restaurant clients already. The technology can do all these things that increase the amount of transactions inside a stadium from people who aren’t even there. We’re not saying it’s going to happen right away but we feel the business model is sustainable for a team longer term.”

For those questioning why somebody who’s not at the stadium would want to buy a friend attending the event a beer and a T-shirt, Stone said there’s demand for mobile purchases completed from outside the venue, according to data from Cheq’s restaurant clients.

In one test, a Generation Z social media influencer at a Seattle bar received 18 drinks in 30 minutes paid for by their followers through Cheq’s platform. The influencer shared those drinks with everyone at the bar. The viral experience gave the tech firm confidence that it could work in a sports setting.

“You’d be surprised; that demographic is a crowd-sourcing model,” he said. “They have no (problem) asking for that kind of stuff from their followers and friends, people who don’t even know them, such as sending them drinks in real time.”

For issues tied to overserving fans at events, Cheq’s system has the ability to shut off alcohol purchases in their mobile app at the same time as the stadium concessionaire. The technology restricts purchases to two alcoholic beverages at a time, similar to the rules at sports facilities, Stone said.

Mobile ordering adoption at sports venues in general is an issue for all teams, food providers and tech firms. It’s typically 2% to 5% of total transactions, industry experts say, although the Marlins have seen upwards of 10% adoption through Cheq’s system without the social media function, Stone said.

“We’ve had more success with the Marlins than they thought,” Stone said. “We’re bullish on that front as well.”