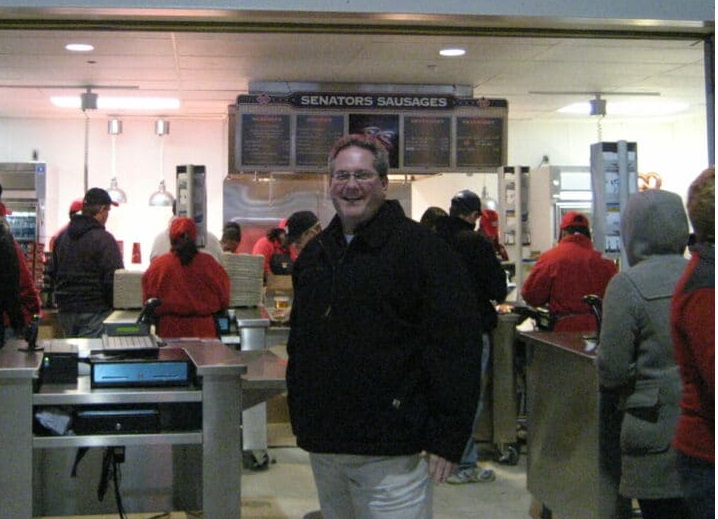 SENATE SEAT: Jim Chibnall stands in front of a food stand at Nationals Park on opening day in 2008, the year it opened in Washington. Chibnall was the project’s lead designer. (Courtesy Gina Stingley)

Jim Chibnall, an accomplished sports architect who helped establish HOK Sport/Populous into a leading designer of Major League Baseball venues over his 30 years at the firm, died March 31.

He was 61. No cause of death was given in Chibnall’s death notice published online.

Chibnall, a St. Louis native and a big Cardinals baseball fan, served as lead architect for Busch Stadium, which the team opened in 2006. It was among a half-dozen MLB facilities he worked on during his career, which extended to designing NFL and Major League Soccer stadiums.

Progressive Field, where the Cleveland Guardians play, was among Chibnall’s projects. The ballpark, called Jacobs Field when it opened in 1994, won an American Institute of Architecture Award for distinguished accomplishment in design excellence.

Most recently, Chibnall worked at HKS for four years following a short stint at HOK after that firm re-entered the sports industry following the formation of Populous in 2009.

At HKS, he worked on Globe Life Field, the Texas Rangers’ 2-year-old stadium. His final project was designing a new 35,000-seat ballpark for the Hokkaido Nippon-Ham Fighters in Sapporo, Japan set to open in March 2023.

His colleagues recall Chibnall as a talented designer, passionate about sports architecture, matched with a great  sense of humor that endeared himself to the team owners that were his clients. He grew up with six brothers, and as a result, he liked to tease people and joke around a little bit. Chibnall took design seriously but had fun with it at the same time, they said.

They also noted that Chibnall relied on his vast experience to mentor young designers over the past several years.

Those mentoring sessions were an important part of Chibnall’s tenure at HOK and Populous, said Earl Santee, Populous senior principal and global chair.

Santee and Chibnall both joined HOK Sport in 1985, two years after the company launched. They helped form the foundation of sports architecture in the Kansas City community.

Together, they worked on Busch Stadium and Nationals Park, home of the Washington Nationals, which opened in 2008, and Heinz Field, the Pittsburgh Steelers’ stadium that debuted in 2001.

Whether it was St. Louis, D.C., Orlando, Baltimore, Dallas and Pittsburgh, “all of those cities have the Jim Chibnall mark on them as one of our lead designers,” Santee said.

“You measure people by the impact they have on others and Jim definitely had an impact on hundreds of people who came through HOK Sport and Populous over the years,” he said. “I was looking at people commenting on his obituary and there were dozens of people that hadn’t worked with us for 20 years making comments. He clearly had a lasting impact — and put me on that list.”

Stewart Ervie, a principal and senior architect with Populous, was on that list as well. He joined the old HOK Sport in 1987 and became a close friend over 35 years. They kept in touch after Chibnall left the company.

Chibnall had a knack for sketching ideas to capture his client’s vision, Ervie said. In addition, Chibnall had an appreciation for the technical side of architecture, and was open to suggestions and alternative ways of doing things. That isn’t always the case with designers, he said.

As part of his personality, Chibnall had a penchant for giving nicknames to people he worked with and “Stooge” was Ervie’s moniker.

“Every two to three months, I’d get this call and Sharon, his wife, was usually sitting by him and he would drag her into it,” Ervie said. “She worked at HOK Sport back in the day as well and I’ve known her forever too. He was always cutting it up with everybody in the office. I didn’t know anybody that didn’t enjoy working with him.”

John Hutchings, a senior principal with Overland Partners, got to know Chibnall pretty well when they both worked at HKS on the Texas Rangers and Nippon-Ham Fighters ballparks. Before the pandemic, they took multiple trips to Japan for design meetings. The trip took 11 to 13 hours one way between Dallas and Tokyo, leaving them plenty of time for conversation.

One example of Chibnall’s sense of humor sticks with Hutchings. They were in an all-day meeting in Tokyo with Obayashi, the project’s construction firm. In Japan, they don’t run air conditioners a whole lot in office buildings, Hutchings said, and on that spring day, the temperature felt like 90 degrees in the conference room.

“I looked over at Jim and there was sweat running down his brow,” he said. “It was just a miserable afternoon. We got through it and I took our guys to a good place to eat, a hibachi restaurant with the grill in the middle of the dining room. Jim walked in late and he said, ‘Hutch, we’re in a room and I’m dying of heat all day and then you put me next to a grill.’ We laughed about that for months afterward.”

Chibnall’s impressive MLB portfolio prompted HKS to hire him after he left Populous. Bryan Trubey, former leader of HKS’ sports practice turned to Chibnall to strengthen their case in competing for the Globe Life Field project, Hutchings said. Trubey started his career at HOK Sport in 1989.

“Jim will be missed,” Hutchings said. “He had a great laugh and clients liked him very much because of his personality. He would tell stories about some of the decision-making process that went on and captivated a lot of our young designers. Jim had made the rounds long enough to where he became a consummate craftsman on ballpark design.”