Bringing Garth’s Nissan Stadium Shows To The (Other) Big Screen 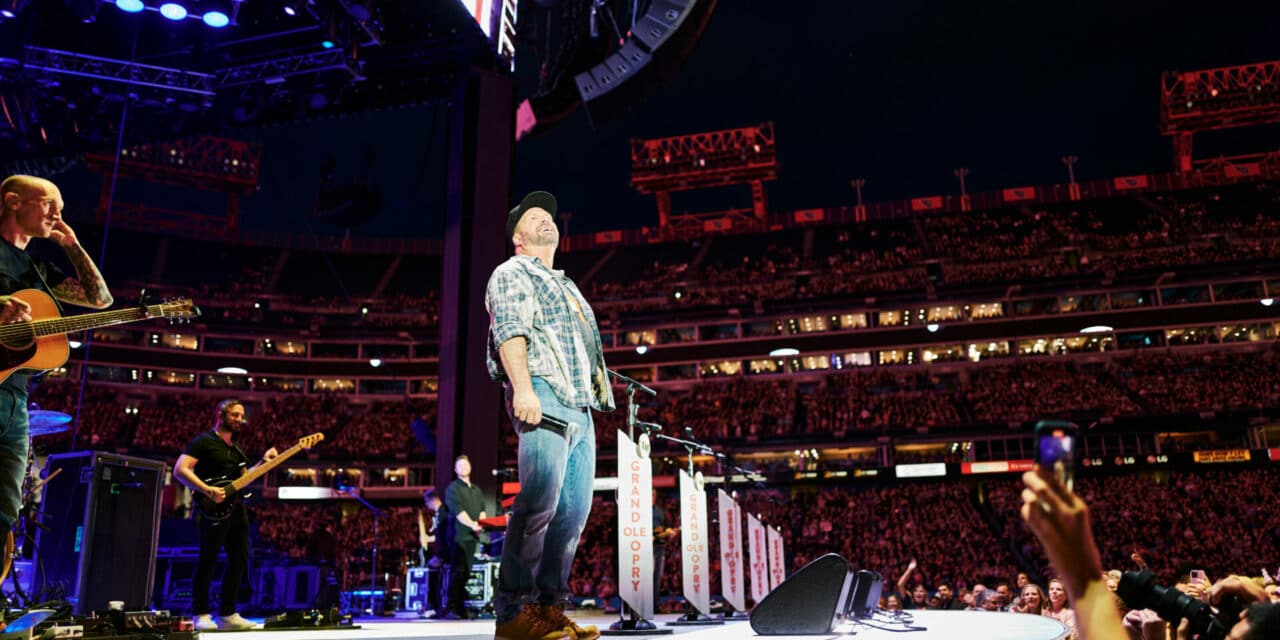 FRIENDS IN HIGH PLACES: Garth Brooks celebrated his Grand Ole Opry membership with an Opry celebration as the opening act for the second concert in a two-show run at Nissan Stadium. (Photo courtesy © 8 Ten, Inc.)

Garth Brooks’ triumphant return to center field at Nissan Stadium after a COVID-imposed delay and a 2021 rainout signals a welcome return of the big rig with stadium-sized production and video content meant to reach the upper rafters.

Travis Walker, general manager of video provider Moo TV, was there for the April 15-16 Nashville gigs and talked about the challenges and opportunities coming out of the pandemic.

“Currently, the available video technology is similar to what we had before the pandemic,” Walker said, adding that Moo TV is currently investing in equipment upgrades including 4K cameras, LED screens and more powerful media servers – a process that will continue for the next five years.

“The goal is to continue to improve our ability to drive higher resolution LED screens, which have a higher density of pixels. Most of our LED is between a 5-millimeter and 10-millimeter pixel pitch, compared to five years ago when 10 to 20-millimeter pitch was the norm,” Walker explained. Moo TV owns many different brands and types of LED screens that are configured to address the specific needs of each tour, as is cost.

Executing the artist’s and design team’s vision is essential for production.

“We’ve been investing in highly transparent LED screens, which have almost sold out this summer,” Walker said. “There is high demand right now as designers are moving back to putting lights behind the LED screens and expanding the lighting rig to make the video content disappear for a song or two in key moments.”

The media servers that power the visuals are adapting, too. Several companies have launched innovative products including the Hippotizer from Green Hippo and Disguise GX2c series with different tools to get the job done in diverse ways including 3-D effects.

The relationship between lighting and video content adds nuance and flexibility to the performance.

Another technology favored by Walker is Notch, which can add effects to live video. For example, if the camera is shooting guitar strings, smoke or fire effects can come off the strings in real time.

“I don’t understand the voodoo magic, but the result is spectacular,” Walker said. “You are creating video that is interacting with what is happening on the stage, and it is being integrated more and more into shows.”

Long gone are the days when putting the current music video behind the artist was the norm. Times change and most music videos aren’t the big budget promotional tools they used to be.

Walker said designers have recently started looking for ways to take what is happening on stage and extend that through to video, including the architectural look. Stages are bigger and the video look has had to adapt and become bigger, too.

Walker gave another example of incorporating live images into a scene. Imagine a nostalgic drive-in movie theater and then picture the artist — in real time — performing on the drive-in’s screen while performing the song on stage.

“You have to stay on the cutting edge to thrive,” offered Walker. “You don’t do the same look for 10 years; you need to adapt.”

But one size may not fit all venues. Walker said being able to scale production and still maintain the artist and designers’ vision is critical.

“Everything is designed in rehearsal and is scalable from there,” he said. “We’ve learned over the years to adapt and scale to the appropriate venue size – sometimes multiple times in a weekend. We can go from a volleyball gym to the Brooklyn Bowl, to Madison Square Garden, Bridgestone (Arena), and a theater in Austin. You must be flexible.”