Before the Big Dig, Builders and Engineers Had to Execute the Big Lift

STEEL CITY: Mortenson had to remove 4,400 tons of steel from old KeyArena before building a new venue under the old roof. (Courtesy Mortenson)

The tricky process of reconstructing Climate Pledge Arena while keeping the venue’s historic roof intact stands among the most challenging projects in the history of sports facility development in North America.

Mortenson, general contractor for the $1 billion-plus transformation of old KeyArena, faced multiple obstacles, not the least of which was the pandemic, which shaved a month off an already tight construction timeline when projects statewide were put on hold because of the fear of COVID-19’s spread.

From the start, the builder overcame one challenge after another to complete the project for a late October opening.

It began after Mortenson took over the project in December 2018. The Minnesota firm replaced the original contractor, a joint venture between Skanska/Hunt, which could not live up to the schedule and cost commitments, said Greg Huber, Mortenson project executive.

As it turned out, what was initially projected to be a $600 million job escalated to more than $1 billion, in part because of Oak View Group, the arena developer privately funding the project, upgrading the building over the past three years. (OVG is also the owner of VenuesNow.)

“This was a project that really deserved a year or 18 months of thorough preplanning and trying to figure it all out, but we didn’t have the time,” Huber said.

It helped that Mortenson was familiar with the project after competing for it in the summer of 2018, he said.

Huber has been with Mortenson for 20 years, and he was picked to help lead the project team in Seattle.

“I was finishing up Allianz Field, which was completed on Feb. 22, 2019,” Huber said, referring to the home of MLS’ Minnesota United FC in St. Paul. “That day, I was out here with my family, saying, ‘Hey, do we want to come to Seattle?’ The ribbon cutting was March 19 and that night I flew out here and started work the next day on the project.”

The project put Mortenson on the path to becoming a leader in sports construction, Mattson said. The company also did the $150 million renovation of Target Center completed in October 2017.

At the time, Mattson was running the building for AEG Facilities.

“We couldn’t be in better hands,” he said. “From the moment they became the general contractor, we were like, ‘We’ve got the pros that will get it done in time.’ This is how they work. They delicately build in extra time to make sure they can do it to the fullest. We’re not going to have a lot of soft openings. It’s pretty much charge ahead.”

As part of OVG’s landmark naming rights deal with Amazon, the developer committed to building the first certified carbon-neutral big league venue in sports and entertainment. It meant going all electric for operating the arena and eliminating fossil fuels as a power source, which has never been done in the industry.

“It added another level of complexity,” Huber said. “COVID came in the middle of March 2020 and at the start of April, we went through this comprehensive study of trying to figure out all the different options, what would they cost and how do we do it in the most intelligent way that provides the most benefits.”

It was a massive undertaking to make the switch.

Huber said the good news is the conversion came before natural gas equipment was installed. Removing it would have made the endeavor even more expensive.

For Mortenson, it was still a matter of making decisions on the fly and working with electricians to figure out the right place for the “giant lineup of gear, how to route the electrical and yet not screw up the schedule while we were doing it or the building,” Huber said.

The issue of keeping the existing roof intact while building a new arena and parking garage totaling 864,000 square feet — more than twice the size of the old venue —  provided the stiffest challenge from a construction standpoint.

The roof, a 360-foot square, is protected as a historic landmark at a venue initially built for the 1962 World’s Fair.

“That’s something that no one has ever taken on before,” Huber said.

To save the roof, Mortenson had to erect a temporary support structure to keep it suspended over a two-year period while excavating 60 feet below grade, removing the existing infrastructure and constructing a new arena.

“We took the roof, floated it in air on a temporary structure, gutted the old arena, created a hole, then made the hole more than twice the size, built a brand-new arena and dropped the roof back on,” said Tim Leiweke, Oak View Group’s co-founder and CEO. 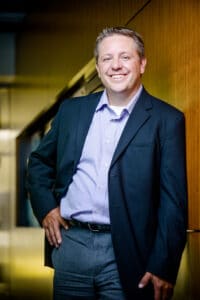 MORTENSON MAN: Greg Huber, project executive, managed one of the most challenging projects in the history of sports development.

For Mortenson, part of the monumental task was to remove 4,400 tons of steel from the original arena. For context, Huber said the total matches the amount of steel it took to build Allianz Field, a 19,400-capacity outdoor facility.

Because of the intricate nature of essentially building a ship in a bottle, the process had workers doing their jobs alongside each other who would typically never cross paths in a conventional job.

The logistics tied to the trickiness of maintaining the roof had the excavator digging the hole next to others responsible for installing the shoring walls, which are temporary walls to prevent cave-ins, and steel erectors.

Construction cranes frequently came within 2 feet of the roof in a perilous dance required to install steel. Any mixup in that step could have led to costly delays, Huber said.

“The level of engineering and planning that had to go into it put a lot of crazy pressure on our team,” he said.

“But we galvanized around that, and quite honestly, it brought out the best in ourselves because we had to be right. We could not afford to be wrong on how we did the temporary roof system, and we had to do it collaboratively.”

COVID-19, which first hit the state of Washington in early 2020 before spreading across the nation, ultimately led to a monthlong delay in construction. The state designated Climate Pledge Arena an essential project, however — one of only three in Washington at the time — and work resumed two days later.

“When we restarted, we progressed at a much slower pace over the next three months than we had originally anticipated due to the restrictions and different work processes that we had to invent and innovate,” Huber said. “After our two-day break, we basically lost two weeks over the next month and then one week over the following two months until we regained our stride.”

Huber said the decision to re-start construction so quickly filled many workers with fear. It led to questions over why it was so important to risk the health of a few thousand people on site just to keep the arena transformation on track for a fall 2021 opening.

To quell those fears, Mortenson, once again on the fly, implemented new health and safety protocols for increased hygiene and protective equipment to help make its workers feel comfortable returning to the job site.

“How do you figure out how to do construction while being separated by 6 feet?” he said. “You’re right there, trying to weave rebar between columns. There was a lot of reinvention, but had we not done that we wouldn’t be sitting here today talking about a late-October opening.”

The recent labor shortage, which affected the supply chain for construction materials, provided another hurdle for Mortenson, although in Seattle, the contractor was not hit as hard as in other cities.

Even before the pandemic, the lack of skilled labor has been an issue in construction.

“The industry as a whole is continuing to fight the war for talent,” Huber said. “Here, more than some other regions, they see it as a career and a lot of young people are enthusiastic about coming to the trades, which is awesome to see. This market is so busy and has been for a long time. There is still demand out there.”

As Mortenson wraps up the project, one thing people don’t really appreciate is the speed at which it’s being completed, Huber said.

All told, it was a 30-month project, from the time demolition started in April 2019 to full completion. That’s 10% quicker than Mortenson’s past arena projects, Huber said.

From the time mass excavation started, it was a 25-month process.

Seventeen months have passed since Mortenson started erecting steel May 11, 2020.

It was all accomplished without leaving a big mess, according to Don Graham, Climate Pledge Arena’s senior vice president of event services and assistant general manager.

The attention Mortenson and its subcontractors paid to picking up after themselves is something Graham said he was not used to from his experience developing Wells Fargo Center in Philadelphia and Staples Center in Los Angeles.

In Seattle, you don’t see empty water bottles and cigarette butts littering the property, he said.

“Those construction sites were disasters,” he said. “Here, it’s unbelievable how they keep it organized and clean. It’s a tight job site and we’re a little bit landlocked. We had to put a sound wall around the construction site to keep the noise inside and not (bleed) into the neighborhood. That wall is now down, but it’s still a clean site.

“It’s Mortenson and the contractors who work locally that care about the building.”

“Some people may ask, ‘How in the heck did they do that?’” Huber said. “There are a lot of great trade contractors in Seattle and really good engineering with Thornton Tomasetti. We had a good project team.”