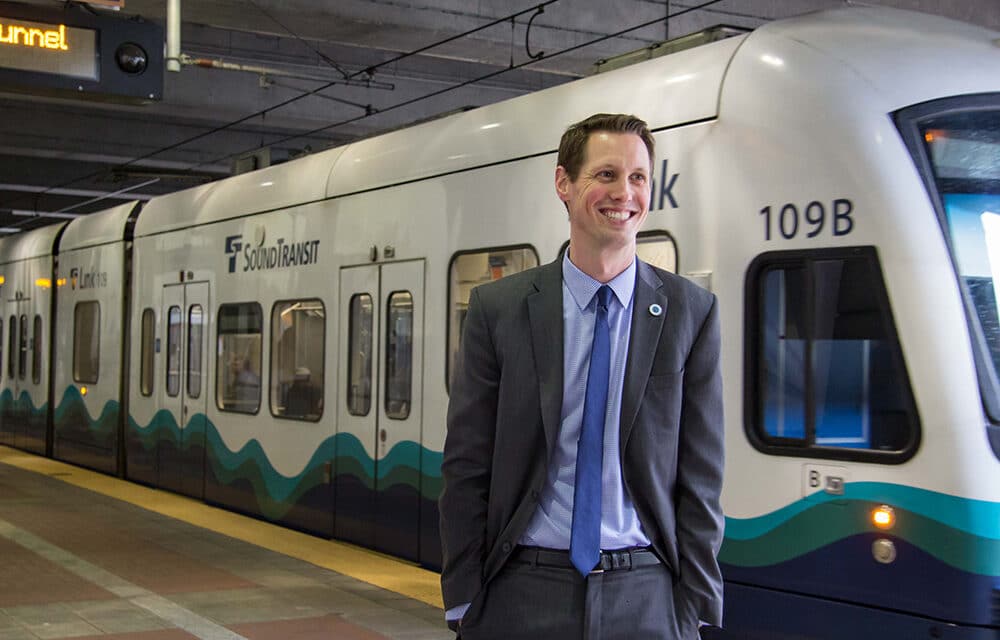 Rob Johnson has immersed himself in the massive effort to develop the first certified carbon-neutral big league venue.

Johnson, vice president of sustainability and transportation for both Climate Pledge Arena and the NHL Seattle Kraken, added “sustainability” to his title soon after Oak View Group hired him to develop a comprehensive plan for getting people to and from the facility for all events.

Transportation remains his specialty and it’s a key piece of the sustainability equation in Seattle. The city has stood at the forefront of the green movement over the years, pushing alternative modes of transportation to reduce automobile emissions.

Johnson’s experience fits OVG’s herculean effort to go carbon neutral for a building type that expends lots of energy by virtue of hosting a few million visitors annually as a public assembly facility.

He earned a master’s degree at UCLA in urban planning and interned with the Los Angeles County Metropolitan Transportation Authority before becoming a transportation planner with DMJM Harris, the LA-based transportation design group within AECOM, among the world’s biggest architecture and construction firms.

In Seattle, Johnson spent 11 years as executive director of the Transportation Choices Coalition, a firm advocating for Washington residents to take a bus, catch a train, ride a bike or walk as part of their daily routines.

He served three years with the Seattle City Council before OVG hired him as VP of transportation in April 2019.

Over the past two years, Johnson has worked closely with architect Jason McLennan, OVG’s sustainability consultant. They’ve teamed with project designers and engineers to form a consistent program to meet the goal of going carbon neutral.

Transportation stands at the top of the list. The more that community leaders can help consolidate that piece of arena operations, the closer the venue will be to achieving its goal of going carbon neutral.

“Jason told me, ‘The one thing that nobody has figured out is transportation,’ Johnson said. “That’s what I do. I gave him my litany of plans, and he said if we can do half of what we want to do, it will be more than most other buildings ever thought of.”

On its own, parking typically ranks at the top of fan satisfaction surveys. There’s not a whole lot of it at the arena itself apart from an underground garage with 465 spaces reserved for players and their families, front office staff and event-level suite holders.

“Even if you saw an amazing concert or a phenomenal game, if you spend most of your time getting stuck in traffic getting home, you’re complaining about that aspect and not the event itself,” Johnson said.

The same thing goes for arriving at the arena, he said.

To help alleviate congestion on site, CPA officials signed parking partnerships with three garages to provide 1,500 spaces within a half-mile from the venue.

Parking a little further away and walking to the building dramatically reduces the carbon footprint compared with getting stuck in traffic trying to park at the front door, Johnson said.

What’s even better, he said, is getting patrons to park downtown at an after-hours discount rate and take the monorail to the arena.

It’s part of the free public transit program subsidized by the Kraken for all ticket holders for hockey games, whether it’s by monorail, light rail, bus or ferry.

The team’s goal is for 25% of attendees to use public transit for the Kraken’s first season, Johnson said.

By the second year of facility operations, OVG expects to expand the free transit perk for ticket holders to all events at Climate Pledge Arena, said Steve Mattson, the venue’s executive vice president and general manager.

The monorail itself initially opened for the 1962 World’s Fair, transporting 8 million passengers over the course of the six-month event.

“I gave (sustainability consultant Jason McLennan)  my litany of plans, and he said if we can do half of what we want to do, it will be more than most other buildings ever thought of.”

It’s an easy trip for commuters, a 5-minute ride with one stop. It starts at Westlake Center Mall and ends at Seattle Center, one block away from the arena. But over time, it’s been pigeonholed as more of a tourist attraction and underused by local residents, according to local reports.

To encourage fans to use the monorail, the Kraken contributed $7 million in private funding to help pay for major upgrades to the mall station, which was in desperate need of improvement.

A new ticketing system at the mall stop and additional elevators are part of the project.

The monorail has been closed for one month for construction and is expected to resume operations by Oct. 22, the date of the Coldplay concert at Climate Pledge Arena, the venue’s first public event.

Using that particular transit line could potentially reduce the carbon footprint for transportation by 50%, Johnson said.

The free transit amenity extends to the 1,800 part-time workers at Climate Pledge Arena across all departments, Mattson said. They all receive an Orca pass, which covers all modes of public transportation.

For those who worked at KeyArena, Climate Pledge Arena’s predecessor, “that card was probably the No. 1 compensation they could appreciate,” Mattson said. “When we met with former workers there, they asked about getting the card again. By having those basics, we got some candidates in the door that otherwise we wouldn’t have been able to compete against.”

In addition, OVG bought eight pedicabs to move people to and from arena events free of charge, Johnson said. They’re basically bicycles with large seats attached behind them that can transport four to six people apiece.

Most pedicabs will operate within a 10-block radius of Climate Pledge Arena, with the capacity to move 1,000 to 1,500 people an hour to parking lots and ride share destinations.

At UBS Arena, OVG’s second NHL venue opening later this fall for the New York Islanders, officials plan to use upscale golf carts that fit 25 to 30 people for transportation from parking lots to the building.

“The benefit they have is it’s all private land,” Johnson said. “We’re operating on city streets, and finding something to operate in a parklike environment that’s street legal proved to be very expensive and difficult.”

“The great thing about pedicabs is you can use the bike lanes and Seattle has a lot of those,” he said. “It’s a great way to use existing physical infrastructure that may be underused while getting to move a lot of people.”