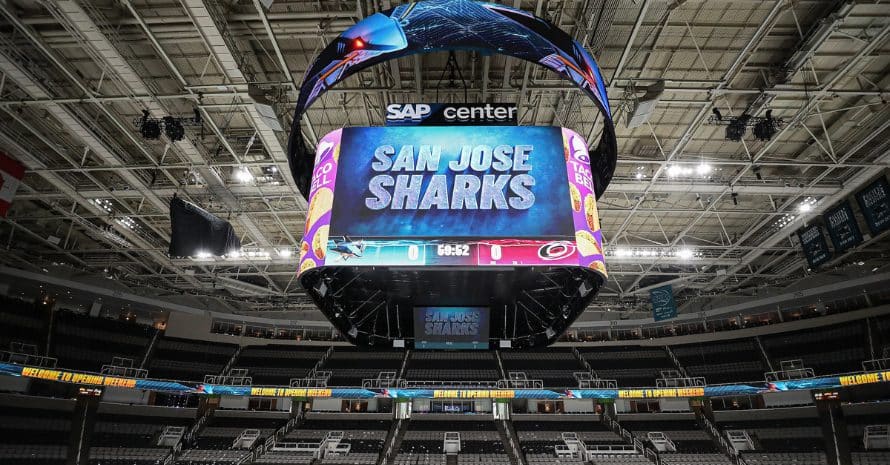 The videoboard industry in sports and entertainment took a direct hit in December after Daktronics, the market leader in LED displays and a publicly-traded company, ran into cash flow issues tied to the post-pandemic world of supply chain and production.

That’ll happen when you have $463 million in backlog orders to complete, including $200-plus million in the live events space, according to Reece Kurtenbach, Daktronics’ president and CEO.

Those accounting concerns, coupled with the requirements for a public company to maintain transparency in documenting its finances, resulted in a one-week delay for Daktronics’ third-quarter earnings call to Dec. 12, with filings containing vague language that suggested Daktronics was in potentially dire financial straits, which is not the case, company officials said.

The filings and delay in the earnings call caused a minor earthquake among investors. Daktronics stock initially fell by roughly 50% on the NASDAQ exchange and the action resulted in some law firms soliciting Daktronics investors over potential violations of their shareholder rights, according to multiple reports.

For Daktronics, the subsequent flurry of trading activity prompted the 55-year-old Brookings, South Dakota firm to issue an official statement to clarify passages in the 8-K filling, most notably “a substantial doubt in our ability to continue as a going concern.”

In the statement, released Dec. 15, three days after the delayed earnings call, Kurtenbach said that he expects the situation to improve in the coming quarters as Daktronics secures financing and reduces inventory. The company has alternative funding sources available, Kurtenbach said in clarifying language in the 8-K document.

In addition, Kurtenbach said in the statement that Daktronics continues to hire workers for production and service to support its growing business, and as supply chain improves, the company is well positioned to convert inventory into shippable products more rapidly, which will improve cash flow in the future.

VenuesNow interviewed both Kurtenbach and Jay Parker, Daktronics’ vice president of live events and spectaculars, to get their insight on the situation. “We have a strong balance sheet, which allows us to use different financing mechanisms using the assets that we have,” Parker said.  “We’ve got over $170 million worth of assets that we could potentially borrow against.”

Kurtenbach told VenuesNow, “As we came out of the pandemic, about 18 months ago, demand came back strong, but supply chain has been uncertain and erratic. We plan our production around demand and our capacity, so we invested a lot of money in automation, inventory and equipment for our (five) factories. That was helpful, but it didn’t help stabilize our supply chain.”

The proactive measures consumed cash, he said. Daktronics secured a $35 million line of credit from its bank, plus an additional $10 million on a 90-day approval renewal, which triggered its accountants to conduct a test under the U.S Generally Accepted Accounting Procedures (GAAP), a process to help make adjustments for taking those risks.

Bottom line, Daktronics “didn’t quite have all the tools in place to pass this test,” Kurtenbach said, despite all factories running at full capacity to catch up with the immense backlog.

As things get sorted out financially, Daktronics should come out OK, sources said, considering the circumstances over the accounting technicalities and securing additional funding. There’s no shortage of business. The industry as a whole is flush with projects as manufacturers catch up with pent-up demand following the COVID shutdown. 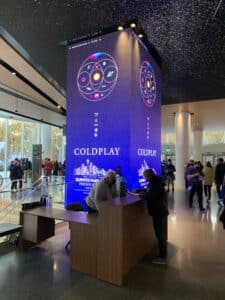 LED IS LIFE: Climate Pledge Arena, a Daktronics project, shows how video displays have expanded beyond the seating bowl to other parts of the venue. (Don Muret/Staff)

Long term, industry officials said it’s a wakeup call for a piece of the business that’s seen consolidation over the past five years, resulting in fewer players producing videoboards at the big league and college level. They say the critical issue remains shrinking profit margins for projects that in some cases now run tens of millions of dollars as LED displays expand beyond the seating bowl to concourse walls and support columns.

The state of the video display industry is compounded by overseas vendors producing the technology at a much lower price. Plus, the market for LED displays at venues in Asia, where many companies in China and Korea produce parts that make up videoboards, is now the biggest in the world, followed by the U.S., Kurtenbach said. Daktronics runs a factory in Shanghai, China among its five facilities.

“It’s not an issue isolated to Daktronics,” said Jerry Cifarelli, founder and former vice chairman of ANC Sports, (now ANC), an integrator of video displays for sports facilities. “The industry needs to come to grips with the fact that these are high-profile installations that improve the game experience for fans and you need to pay for that value.”

“They’re good people and we need organizations like that in our industry,” said Rich Ongirski, senior vice president of Jones Sports, a competitor. “People are going to take a look and say, if the star of the show is having difficulties, what about everybody else, and maybe some of our competitors will hold the line in terms of their pricing as well.”

Over the past few months, Daktronics has seen improvements in the supply chain for delivery of hardware and parts from overseas and shipping completed boards to customers in North America. As it stands now, shipping dates for new displays have reduced to eight months out compared with 10 months at the start of 2022, Parker said.

“It’s promising, but that doesn’t mean there won’t be bumps in the road,” he said. “It’s more stable today than it’s been in an awful long time.”

For Jones Sports, volatility over the past two years led the firm to take a temporary reprieve to see how everything shakes out after the market stabilizes. The DePere, Wisconsin company has shifted from producing and installing videobards to working on the architectural design aspect of LED displays attached to the exterior walls of stadiums such as TQL Stadium and Lower.com Field, two MLS facilities in Ohio.

“It was absolutely a perfect storm of being out of the business for a few years,” Ongirski said. “Supply chain being so slow and backlogged, labor costs going up and a market that insists on the lowest of margins, that’s why we’ve been sitting on the sidelines. We refuse to play when you can’t make any profit. We’ve put our efforts into the facade work on stadiums in Cincinnati and Columbus and that makes more sense for us.”

All told, Daktronics is a solid brand that prides itself on producing video displays in the U.S. without relying too much on international manufacturers. Their customer service group with representatives across the country to assist clients post-installation is unparalleled as Daktronics compete against Samsung, ANC, Toshiba and Mitsubishi Electric, among others, experts said.

“We’ve all seen price increases over the last two years,” Parker said. “The key is can you keep up with it in your pricing. Customers want suppliers to stay in business and that means you have to make a profit to have long term support. We design and build the product and can get parts like nobody else because we build it ourselves.”

The intangible things investors don’t see behind the curtain is that Daktronics is a big supporter of multiple trade organizations through their advertising dollars and exhibit booths. It’s difficult to imagine an industry without the familiar faces of longtime company executives attending those events such as Parker, Will Ellerbruch, Brent Stephens and Tony Mulder.

Time will tell for one of the most reputable and trusted brands in the sports biz. It’s up to the industry to step up and take a leadership role, Cifarelli said, including teams and schools that generate millions of dollars from sponsors displaying their brands on Daktronics screens in the seating bowl, concourses and outer walls.

“All these companies are doing high quality work, which enhances the fan experience and the marketing revenue for these clubs,” he said. “They need to realize you can’t get these things at a discount. Hopefully, there’s a readjustment in the price point and these companies can make some decent margins on these enormous projects.”