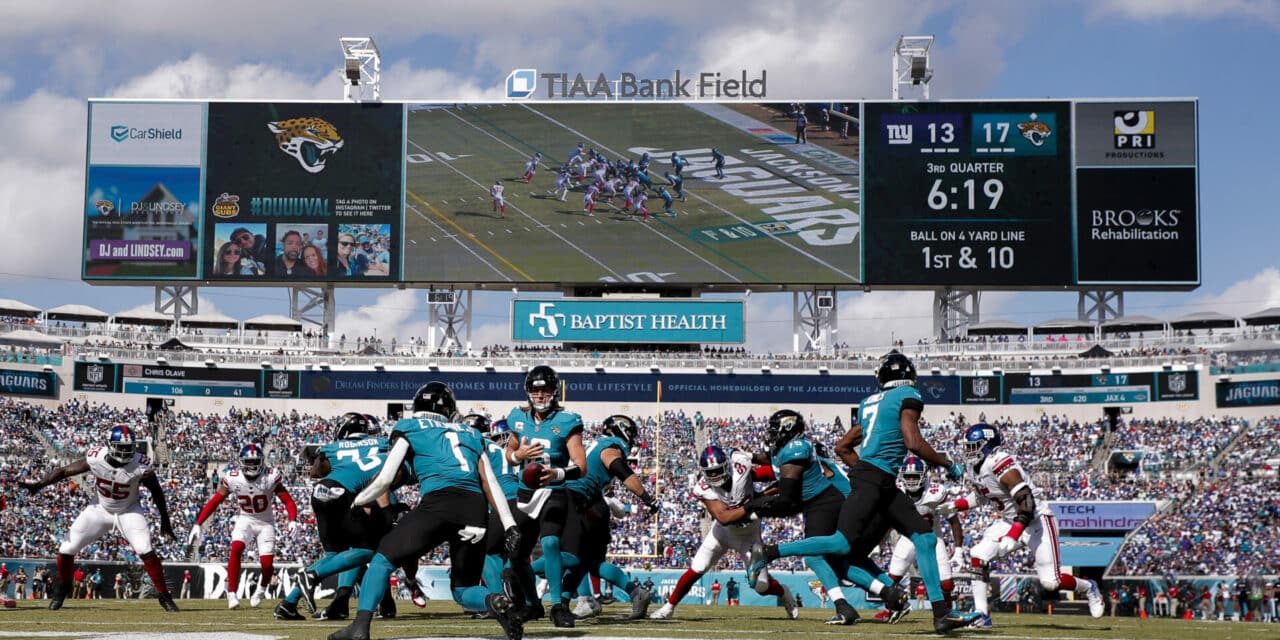 TAKE IT TO THE BANK: The Jacksonville Jaguars, shown here playing the New York Giants at TIAA Bank Field on Oct. 23, are proposing a major overhaul of the stadium. (Getty Images)

The Jacksonville Jaguars have selected HOK as their design consultant for an extensive renovation proposed for TIAA Bank Field after a year-long process to determine the best architect for the job, confirmed Mark Lamping, president of the NFL team.

HOK won the work over seven competitors submitting preliminary concepts for a revamped stadium that would include a shade roof covering the seating bowl and downsizing to roughly 57,500 to 60,000 fixed seats, Lamping said.

TIAA Bank Field’s current capacity for NFL games runs about 68,000 with the flexibility to expand to 82,500 for the annual Florida-Georgia college football game. Recently, the two SEC schools approved a reduction in capacity of 77,000 for that game, Lamping said.

The selection of a sports architect is the latest step forward as the Jaguars refine the design, cost and schedule of renovations and continue discussions with stakeholders, including the city of Jacksonville, which contracts with ASM Global to run the building. Lamping said the plan is to form a public-private partnership to finance the upgrades. The Jaguars’ lease runs through the 2030 season, and major renovations would tie into a lease extension with the city.

“This is not a project yet,” said Lamping, spearheading his third big-league development after serving in a principal role for building Busch Stadium and MetLife Stadium over the past 16 years. “We wanted to be in a place where we knew what the renovated stadium could look like and how do you renovate while still trying to play NFL games. We’re in a good spot. If we do go forward, we will essentially end up with a new stadium built on the existing structure.”

HOK will assume the role of design architect if the Jaguars move ahead with the renovations, Lamping said. A construction manager has not been selected, pending public procurement guidelines.

The overall process started about two years ago, in conjunction with the city, by completing an engineering assessment of the building. As part of that study, the Jaguars weighed the costs of renovating a stadium in which parts of the infrastructure date to 1928, the year it opened, against building a new facility from the ground up.

Unlike the Tennessee Titans, their AFC South rival building a new $2.1 billion venue after originally planning upgrades to Nissan Stadium that added up to $1.9 billion during a period of record inflation, the Jaguars found it was significantly less expensive to renovate TIAA Bank Field, Lamping said.

“It was a no-brainer for them, but the delta for ours (between those two costs) was a lot bigger than that,” he said.

Industry sources say the renovations in Jacksonville could reach $1 billion, but Lamping said it’s too early to provide an estimate, considering market volatility for construction materials.

“We haven’t got to that level of precision, so we’d rather not get into projecting cost at this point before we have the real opportunity to sit down with our partners, principally the city of Jacksonville, to see if we can structure something that makes sense,” he said. 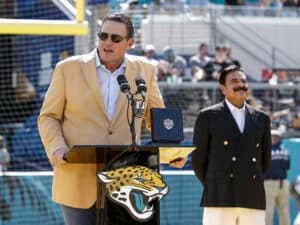 General contractors AECOM Hunt and Barton Malow have worked alongside HOK and HKS, the other finalist, to help determine pricing and schedule. Impact Development Management, formerly Darden & Company, the owner’s representative for Mercedes-Benz Stadium, is involved in determining soft costs for the Jaguars’ proposal.

HOK’s most recent NFL project was Mercedes-Benz Stadium, a retractable-roof facility that opened in 2017. Bill Johnson, an HOK senior vice president and design principal with about 35 years of experience, worked on the Atlanta stadium, as well as MetLife Stadium and Chase Field, an MLB venue that opened in 1998 with a retractable roof.

As a firm, HOK designed the $755 million transformation of Hard Rock Stadium, home of the Miami Dolphins, showcasing a roof canopy retrofit. The three-year project was completed in 2016.

“We thought they did an exceptional job of understanding this building as it currently exists and addressing the many issues in a very creative way,” Lamping said. “Everybody looked at the roof a little differently. All the submissions were really strong, but we felt HOK was a little bit better.” 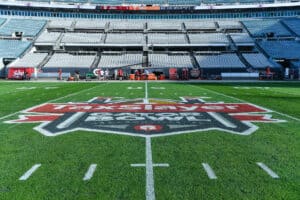 VINTAGE BOWL: The TaxSlayer Gator Bowl has been a stadium tenant over the past 80 years. (Getty Images)

In Jacksonville, the initial plan is to design a roof made of ETFE, the hard plastic material that makes up fixed roofs at multiple NFL stadiums, but maintain an open-air environment. In that respect, it would be similar to SoFi Stadium’s roof that’s open air along the sidelines.

“One of the things that we found that we have confidence in is just how comfortable a stadium can be that has a full roof, if you’re sensitive to air flow,” Lamping said. “That’s one of the best things about SoFi; they did a really good job of designing a stadium to maximize air flow in the seating bowl. We don’t need a climate-controlled building in Jacksonville any more than they need one in LA, but we do need shade on all the seats and protection from the rain if we hope to increase the amount of non-NFL business that we can give back to the stadium.”

HKS, which is designing a hotel and office complex as part of the Jaguars’ mixed-use development next to the stadium, designed the two-team NFL venue in Inglewood, California.

Building a shade roof became a top priority for upgrading TIAA Bank Field after CAA Icon conducted a fan survey over the first half of 2022. A total of 5,842 people responded to the survey, of which 81% said there should be shaded coverage for all seats, local media reported.

In addition, 63% of respondents said all seating should have rain protection and 69% want improved air flow.

Developing more amenities for general admission seating was another concern among respondents, and that’s part of the initial design concepts for an improved TIAA Bank Field, Lamping said.

The stadium currently has 96 suites and that number could go down, but with a greater mix of premium seat options as that piece of the proposed project evolves over time, he said.

The two swimming pools and outdoor cabana suites in the north end of TIAA Bank Field, which made a big splash when they opened in 2014 as a group space for NFL games, will remain intact and the cabanas would be revamped as part of the renovations, Lamping said.

Populous designed that project, plus Daily’s Place, a 6,000-capacity amphitheater attached to the stadium that opened in 2017 with the stage doubling as a practice field for the Jaguars.

Thirty years ago, the old HOK Sport, which morphed into Populous in 2009, designed a $120 million reconstruction and modernization of the old Gator Bowl Stadium to accommodate the Jaguars, an NFL expansion team that began play in 1995.