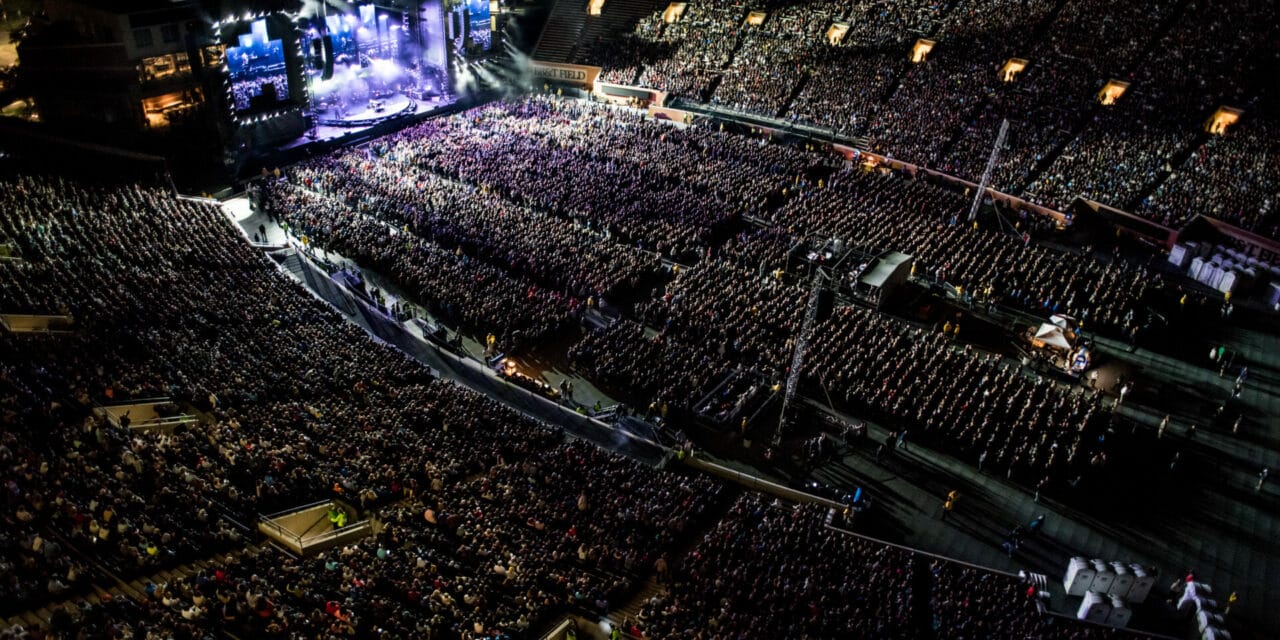 No big surprises there. In the middle of the itinerary, though, is Winston-Salem, North Carolina, a city of 244,000. McCartney plays May 21 at Truist Field, home of Wake Forest University’s football team, the Demon Deacons.

The date sticks out, mostly because the stadium hasn’t traditionally been a major player on the concert scene.

That dynamic has changed over the past decade under a booking agreement between the ACC school and the Greensboro Coliseum Complex, where officials run about 10 city-owned venues 30 miles west of Winston-Salem.

The original five-year agreement, signed in 2013, covers Truist Field and Lawrence Joel Memorial Coliseum, Wake Forest’s basketball arena. In 2018, it was extended for another five years through 2023.

Wake Forest gets a share of concert-related revenue, although officials would not discuss details. Venues typically generate income from concessions, parking and a small piece of concert merchandise sales.

McCartney is the third concert at Truist Field since the deal was signed, following Guns ‘N Roses in 2017 and Billy Joel in 2018.

Guns ‘N Roses, the first show at the stadium since New Kids on the Block in 1990, sold 30,562 tickets. For Billy Joel, attendance was 33,373 for his first-ever stadium concert in North Carolina.

For McCartney, stadium capacity runs about 36,000, which is about 5,000 above typical capacity for football. It’s on the small side for stadium shows but officials point to a more intimate setting.

The seating manifest for the concert extends to 8,000 seats on the floor and 3,000 spaces on Deacon Hill, the grass berm in the southeast end zone. Lawn seats are priced at a bargain rate of $40.

Johnson previously worked with Marshall Arts when Paul McCartney played Greensboro Coliseum in 2014, which Johnson said was among the best concerts he’s seen over his 31 years in the business.

The decision to play Winston-Salem ultimately came down to McCartney. He prefers to play venues he hasn’t performed at previously, according to Corbett. In the past, McCartney has played arenas in Charlotte, Greensboro and Raleigh. This time, he was looking for a stadium.

Talks between Wake Forest and McCartney’s camp went on over the past eight months, Johnson said. The promoters came to Winston-Salem and reviewed the stadium to see how it would work under the right structure before confirming the event.

“We’ve worked hard to carve out Truist Field as the stadium play in the Carolinas, which was prior to the Carolina Panthers deciding (Bank of America Stadium) was going to be a concert venue,” Johnson said.

Panthers owner David Tepper bought the team in July 2018 and has aggressively pursued stadium concerts to generate revenue apart from NFL games. The team had four shows on the books in 2020 that were all postponed due to the pandemic. As of this week, five concerts were confirmed at Bank of America Stadium for 2022. A new date for Garth Brooks, for which 75,000 tickets were sold and was postponed five times over two years, has not been announced.

Bank of America Stadium can hold roughly 50,000 people for end-stage concerts. (Garth Brooks is a midfield setup). Truist Field has been in the running for most shows that selected the NFL facility because of promoters’ ability to sell  10,000 more seats. In that respect, securing McCartney is a big step forward coming out of COVID-19, Johnson said.

“It’s significant that we were able to book McCartney,” he said. “The closest date to us is Thompson-Boling Arena in Knoxville, Tennessee. We’re the only date in the Carolinas, Virginia and Georgia.”

Truist Field and Bank of America Stadium both have artificial turf, which gives those two venues an advantage for concerts over Duke’s Wallace Wade Stadium and North Carolina State’s Carter-Finley Stadium. Both have grass fields.

“We’re fortunate to have it,” Johnson said. “One of the negatives of playing on a grass field is you can only cover it for seven to eight days before the grass starts to die. With artificial turf, you don’t have to worry about it.”

There’s ample parking at Truist Field, priced at $20 for McCartney. Between 8,500 and 9,000 spaces are distributed between stadium lots, the coliseum next door and the regional fairgrounds across the street.

It’s a relatively easy drive to Winston-Salem on multiple highways leading to the city, most of which have been improved over the past few years, according to John Currie, Wake Forest’s athletic director.

“We have a unique situation here,” Currie said. “From a geographic perspective, as you go to the west and north of Winston-Salem, that whole ‘catch basin’ fits right into Wake Forest. It really is the platform to have the best fan experience in North Carolina for any type of activity.”

Holding concerts on campus is part of the school’s vision to add value to Winston-Salem and the region, he said. They’re also looking to book more concerts at Lawrence Joel Memorial Coliseum.

“We were out of that business during COVID for obvious reasons,” Currie said. “We will increase opportunities to bring acts to Lawrence Joel.”

Wake Forest has recently invested $110 million to renovate and expand its sports venues, including practice facilities for men’s and women’s basketball. As a result, it gives school officials greater flexibility at the arena to find open dates for shows, Currie said.

“We have the ability to be more creative with all of our venues,” he said. “David Couch Ballpark could be a wonderful amphitheater. We could bring a concert stage there during the summer.”

“For Truist Field, we have to balance the market in terms of the number of shows that are going to play in a facility of that size with the schedule and timing,” Currie said. “We have to be cognizant of the football schedule in August and the fall to make sure it doesn’t negatively impact our program, which is the most successful in the region.”