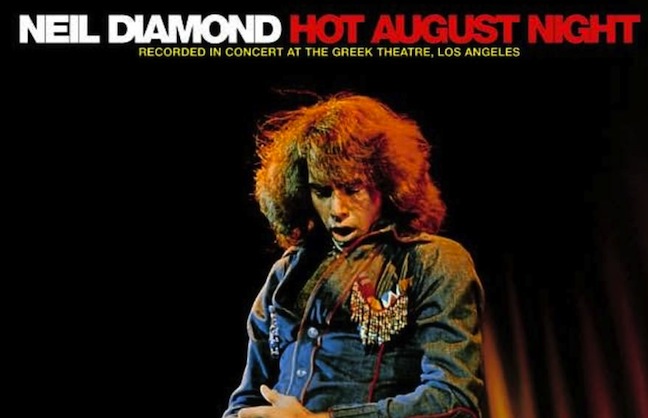 They say you can never go home again. But rock legend Neil Diamond and Los Angeles' Greek Theatre are setting out to disprove that adage this summer. At a time when many artists are celebrating major milestones and album-release anniversaries by playing their most popular and influential works in their entirety, Diamond is returning to the Greek for a once-in-a-lifetime look back at a live recording from the Greek that set the standard for in-concert albums, part of a large mostly-arena tour stretching from a June 1 date in Sunrise, Fla. at BankAtlantic Center to a Sept. 1 date at the MGM Grand Garden Arena in Las Vegas.

In Los Angeles, Diamond will celebrate the 40th anniversary of his 1972 “Hot August Night” double album by playing a return engagement at the Greek on Aug. 11 and 16.

And in a lineup that, at press time, already featured a number of major shows at the Greek — including gigs by Broadway star Kristin Chenoweth, a season-opening Cinco De Mayo festival starring Los Lobos and visits from Al Green, Alan Jackson, Ringo Starr & His All Starr Band, and Crosby, Stills & Nash — the Diamond booking is, well, a gem.

“It was not for me to convince him of anything,” said Alex Hodges, CEO for Nederlander Concerts. Hodges said Nederlander had been kicking around the idea of doing a return engagement anniversary “August” show for years and had brought up the idea to Diamond's camp over the years. “The conversation had occurred a number of times and what happened is that it is such a classic and wonderful idea … but it had just never come to pass.”

But when the proposal went out to manager Irving Azoff for the 40th-anniversary gig, the idea at last gelled. Hodges said he got a call last summer while he was on vacation and, with Diamond already planning a summer 2012 tour, the pieces finally fell into place. “Figuring out how to do that in the scope of his tour, and taking time in August to make it happen, became our project with his team and my team,” he said.

The next step was to lock down the dates, and then make sure that Diamond and Azoff were comfortable with the presentation and the promise that the Greek show would be totally unique.

What they came up with — a plan that Hodges said he could not yet reveal the details of — is a show that he promised would be different from the rest of Diamond's summer tour. “We will build the stage out a bit so, from the terraces to everywhere else, you will have a great view with the orchestra pit at stage level,” Hodges said. “He'll be much more out front … I do know it is unique in every sense of the word. That's why all the shows for the tour have been on sale and there was this absence of shows in Los Angeles because they've been working on letting it gel and come to fruition.”

Hodges said Diamond and Azoff have been “very hands-on” in working with the Greek in putting the show together at the 5,800-seater, where a few seats and part of the orchestra pit will be lost in order to expand the stage and set up several rows of VIP seats.

With the dates already up for sale for American Express customers on Wednesday (February 29) and for the general public on March 5, Hodges said, if nothing else, nailing down the shows will be a long-sought feather in the venerable venue's cap. And though the tickets are likely to blow out the door in record time, he pledged to execute a full-court “spectacular-and-total” press campaign, with full-page ads in the Sunday Los Angeles Times this weekend, radio and TV spots and a flurry of social media efforts.

Diamond played his now-legendary string of seven sold-out nights at the Greek in the summer of 1971 and returned the following August for 10 more sold-out shows, which were recorded for posterity and released as “Hot August Night.” The album helped cement Diamond's reputation as a stellar live performer along with becoming one of the singer's most successful albums worldwide, holding down the #1 spot on the album charts for 29 weeks.

Diamond will return to the stage this summer and play all the hits made famous by that recording, including such standards as “Solitary Man,” “Red Red Wine,” “Song Sung Blue,” “Cracklin' Rosie,” “Sweet Caroline” and “I Am … I Said.”

“I think it's a built-up anticipation that maybe this would happen sometime – whenever I'd see a neighbor or dentist or someone who lives in the market, they would say, 'I saw Hot August Night, when will it come back?'” Hodges said, laughing that he would often go to cocktail parties and hope that nobody would ask about it. “That's what makes it special, that great memory. Sometimes things shouldn't be repeated, but this isn't like something coming back too soon or too late, it's just the perfect moment to celebrate it.”

Resisting the temptation to use the Diamond shows as a hook to promote the rest of the Greek's season, Hodges said the gigs are historical events that will stand on their own. “It's always unique and we're proud when an artist plays the Greek and decides to come back,” he said. “But one of the things we try to do is offer diversity … and this is about Neil Diamond's decision and his desire to come back and celebrate.”

Though ticket prices for the shows had not yet been posted at press time, the Greek is also offering VIP packages through VIP Nation, which will include premium seats, exclusive merchandise, a pre-show reception with buffet, early entrance, an exclusive gift, and more perks.